John Morgan, the face of Morgan & Morgan, one of the largest law firms in the country, is often portrayed as larger than life. Some days it seems that you can't turn on your television without seeing his concerned face and Kentucky accent earnestly suggesting, "If you've been in an accident, call Morgan & Morgan -- For the People." The phrase is almost as omnipresent as his television ads.

But this year, we have seen him promoting a different cause - the legalization of medical marijuana. He started by putting $4 million of his own money into the petition campaign that ultimately led to a ballot initiative for a state constitutional amendment. Now called Amendment 2, it currently awaits the November mid-term elections.

As he continues to promote Amendment 2, he has publicly debated many of the leaders of the opposition to the ballot initiative, including University of Florida professor Kevin Sabet and Sheriff Grady Judd of Polk County. There have even been chants of "For the Reefer!" at one of his speeches.

He has been accused of several ulterior motives for his fervent support, from promoting his friend and colleague Charlie Crist's second run for governor to a plan to make millions in the future from the marijuana industry in Florida. He has joked that he would never put even $1 million into Crist's campaign, and as far as the secret plan to make millions dispensing medical marijuana, it's not like he needs the money, after garnering the profits of a law firm that spans seven states.

One of the main reasons he has put his money and efforts into the cause is someone very near and dear to him. Younger brother Tim Morgan doesn't go to the rallies, but if he did, you would recognize him as the one with the big smile, a wheelchair and a living reason for the need for medical marijuana. 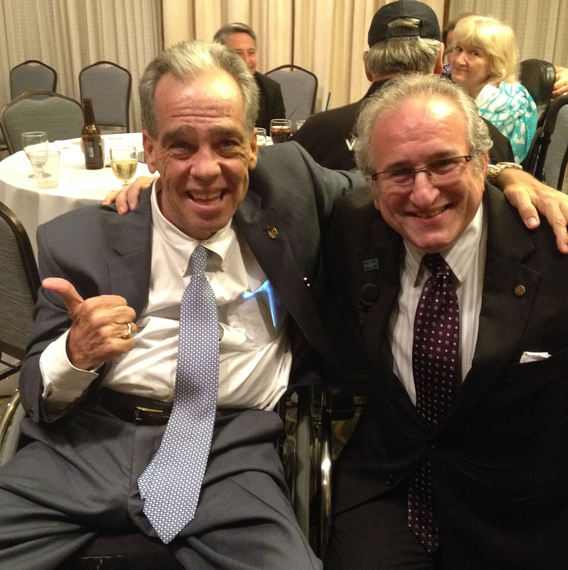 After moving to Florida in the '70s from Kentucky, Tim was an energetic senior in high school who took a job at Disney World as a lifeguard. "I was always the funny one," he recalled, "but I learned that some things in life just aren't funny." He was referring to the accident that left him paralyzed.

Tim was on duty when a frantic woman ran to the lifeguard team to tell them that her daughter had gone missing, and she believed that she was last seen along the shoreline near the Polynesian resort. She pointed to the area and Tim dutifully dived in to look. He didn't know that the area he jumped into had recently been a dock, and the platform had been removed, but the concrete pylons were still under the water. His supervisor dove in when it was obvious that Tim was in trouble, and pulled him ashore, forgetting that the proper procedure would have been to immobilize him on a board. Tim was rushed to the hospital with a severe spinal cord injury.

In the meantime, the girl was found, asleep in her room at the Polynesian. She hadn't even gone down to the water.

He spent many months in the hospital. He slowly recovered the use of his arms and a small amount of feeling in his legs, but he would never walk again. Disney World, "the most magical place on earth," fought his workman's compensation claim. To (literally) add insult to injury, in lieu of a settlement, they offered him a graveyard-shift resort phone agent position. Indignant over Tim's battle with Disney, big brother John, then 21, decided to go into law, and Morgan & Morgan was born.

But Tim's battle had just begun. Even though he couldn't use his legs, he suffered severe, painful muscle spasms that stiffened his legs and made him break out into a profuse cold sweat. "It would literally knock you out of your chair!" he recalled. His doctors countered with a regimen of 13 different medications, including 4 mg of Xanax each day (normal doses for anxiety are .25 or .5 mg), and medications, including Vioxx and Darvocet, which have been blacklisted. "Who knows what those medications did to me," he said.

But it wasn't until he was offered some pot while visiting his girlfriend in college that he found some true relief. "It was almost instantaneous," he remembered. His pain subsided, the sweat left his brow, and his legs finally relaxed. His pharmaceutical regimen gave him little relief and made it hard to function, but marijuana worked, and he stopped taking all the pills and started living again.

One thing that stands out when you meet Tim is his "joie de vivre." He has survived his spinal cord injury, a bout of head and neck cancer and has a new pacemaker. He stopped smoking ("after all, I got a 5-year-old daughter in the house") and takes several squares of chocolate a day. He embraces life and runs one of the largest law firms in the country. You can't help but smile when he talks to you. He is serious about his work, but he is still the "funny guy" that took the job at Disney and spent his prom night in a hospital bed.

He is the living embodiment for what medical marijuana can do to improve quality of life, and the reason why his big brother John has spent millions of dollars and traveled thousands of miles to debate and promote the effort to make this happen.

It's for Tim, and, of course, for the people.

Gary Stein, MPH, a native Detroiter, worked for the Centers for Disease Control, landed in the Tampa Bay area to work for the State Tobacco program and is now a health advocate and activist and blogger for the Huffington Post. Column courtesy of Context Florida.