A volunteer with Rand Paul's Senate campaign has admitted to placing his shoe firmly on the face of a MoveOn.org volunteer outside a Senate debate on Monday night, but insisted that the camera angle of the footage that captured the altercation made the scuffle look worse than it was.

Tim Profitt apologized for the incident in a statement sent to a local AP reporter. But he also criticized the police for not stepping in to calm down the crowd and argued that other supporters had previously warned authorities about the MoveOn activist, Lauren Valle.

(See Valle's recounting of the event below)

Profitt is not, it appears, a random campaign volunteer. Almost immediately after admitting his role, a picture of him and Paul surfaced. 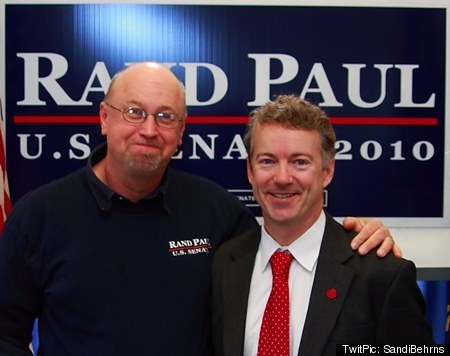 The local blog Barefoot and Progressive also noted that the Paul campaign once touted Profitt's endorsement in a newspaper ad.

A spokesman for the Lexington Police Department said on Tuesday afternoon that "Mr. Profitt is currently being served with a criminal summons ordering him to appear before a Fayette County District Court Judge."

UPDATE: On Tuesday, Lauren Valle spoke for the first time since being thrust into the center of an alarming campaign fracas. Valle said that she recognized the Paul supporters who went after her and felt frightened almost immediately after they claimed they were there to do "crowd control." Her treatment, she said, was "premeditated."

I have been at a bunch of events before, the previous debate, and the Rand Paul campaign knows me and they have expressed their distastes for my work before. What happened last night was that about five minutes before Rand Paul's car arrived they identified me and my partner, Alex, who was with me. They surrounded me. There was five of them. They motioned to each other and got behind me. My partner Alex heard them say 'We are here to do crowd control we might have to take someone out.'

When Rand Paul's car arrived a couple of them stepped in front of me so I stepped off the curb to get around them to get back out front. At that point they started grabbing for me and I ran all the way around the car with them in pursuit. The footage is after I've run all the way around the car and I'm in front of the car and that is when they took me down. One or two people twisted my arms behind my back and took me down... It was about two-to-three second after that that another person stomped on my head. And I lay there for 20 seconds or so and my partner Alex came and got me up and that's the point where there is the media clip of me speaking.

Valle, who is going on MSNBC's Countdown With Keith Olbermann Tuesday night to discuss the event, said that the closest she got to Paul was "about five feet away" and that was only because she was running from the crowd.

As for the notion that she was kicked on the neck, not the head, she replied: "My memory of them is sort of that of a traumatized person. I think it was my head. My head is in a lot of pain today, my neck is kind of kinked. But I distinctly remember a blow to my head."

Addressing the next steps that she will take legally, she offered the following: "I was questioned by the police for about an hour and then afterwards I did file an assault complaint... I think it's public, one of the people has been identified and he ... works for the campaign and there will be further legal action taken. I'm not sure what it is called, but the detectives are moving forward with the case."