Apparently, Shaquille O'Neal uses a different set of metrics than Jaws. With the NBA season concluded, Shaq has taken his analysis from TNT to the gridiron and made a bold prediction regarding the New York Jets. He tweeted on Monday that this duo will lead the Jets to the Super Bowl.

jets fans this man has been working out. Look at those arms. With him and Sanchez u heard it here first
Superbowl pic.twitter.com/c4XYNzMI

What makes Shaq so confident that Gang Green will finish reach the NFL's biggest game for the first time since Joe Namath made a bold guarantee of his own?

The five-time NBA champion tweeted of photo of himself gawking at a muscular Tebow in a sleeveless t-shirt. 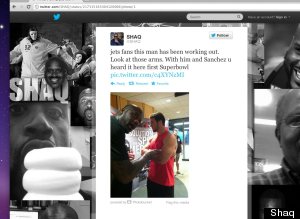 It is no secret that the Jets' polarizing back-up has been bulking up, as he recently told reporters during mini camp that he'd been bulking up. With the Jets' brass insisting that Sanchez will hold on to the No. 1 spot on the depth chart, Tebow is presumably packing on mass to withstand the rigors of New York's "Ground And Pound" style.

"I'm trying to be in shape, be strong enough to do anything, but also fast enough to run around a little bit as well," said Tebow earlier this month (via Rich Cimini of ESPN).

While Jets fans surely hope that Shaq's pick proves correct, it's possible that the hoops leviathan was merely paying back the devout quarterback for wishing him a "Happy Birthday" earlier this year.