It's not every day I get to meet football stars. As a matter of fact, I am one of "those people" who only watches the Super Bowl for the halftime show. I don't know much about American football, but I do enjoy experiencing and pondering it's social impact. I often joke that, given it's place in American culture, it really should be a part of the American citizenship test for us immigrants: "1. Name the current president of the USA, your state governor and your local mayor. 2. Who does Tom Brady play for? Who is Tim Tebow?" 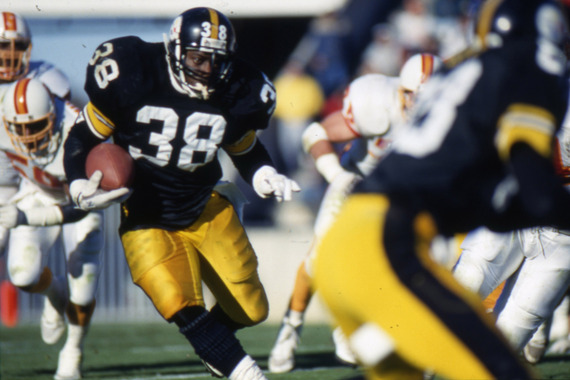 So, when I interviewed Tim Worley for my Waking Up in America TV show, I really should have been more nervous. But I wasn't.

Tim was there with his wife Dee, whom I interviewed first. We spoke about her past as a former national and international gymnastics champion and also about the amazing love story she had to tell. She shared a side of Tim that was vulnerable, real, broken and restored. By the time I sat down with Tim, I was no longer interviewing the running back who was a first-round draft pick for the NFL and the superstar athlete who played for the Pittsburgh Steelers and the Chicago Bears. I was sitting down with an incredible human -- a soul on a journey.

Tim was raised in a family of five boys, in a small North Carolina town. All of the boys played sports, and for Tim, the field was a place where he could release the frustration caused by his father's drinking and physical abuse of his mother. In high school, the world of sports was the place where he could feel good and secure about himself.

Tim thrived as an athlete, recognizing that he had a gift, but also working hard, because he "wanted to be better." He would train hard, running stadiums, hills, and around the campus with weights on his shoulders.


"If I felt tired or lazy, or didn't feel like it... That's the time that I pushed myself."

The sport became who he was.

It happens to many people who find their passion and their sense of self in what they do. For a long time I didn't know who I was outside of my music career, and ice skating champion Lucinda Ruh had a similar story that we explored in my episode Finding Lucinda in the Queen of Spin.

Of course, this losing the sense of ourselves in the roles we play is not something that only happens to celebrities or champions. We may have jobs we are passionate about. We may try to create dream lives with perfect marriages and perfect parenthoods that lead us into an unhealthy imbalance where we lose connection with ourselves outside these roles. In addition, these outside successes validate us and offer external approval, that, as Tim says, feels good and helps to keep us stuck.

"I took on this identity [of a star athlete] because ... when I took that on, I felt good about myself. That was my sanctuary. When you come in this sanctuary you don't have to battle."

With his determination, discipline and natural gifts, Tim steadily rose to superstardom. He was an All-American running back for the University of Georgia, and was a first-round draft pick for the NFL as a running back. But too soon he got lost in a world which requires more than physical strength in order to thrive, not just as an athlete but as a whole person.

"I had no idea the course, the path that drugs and alcohol was going to set me on, even though it was very recreational and innocent...

When I got into the NFL and signed these huge contracts ... you didn't have to buy this stuff. It was there. It was given to you. You go to a party, you see marijuana, you see cocaine, you see pills, you see girls everywhere, all types of stuff, and so when you don't know who you are, how do you resist that? You go from, you know, having a couple of hundred of dollars in your account to ... now you got 3.5 million dollars in your bank account overnight. What do you do with that?"

I listen to Tim as he speaks about these experiences during his NFL career and I can't help but feel compassion and a sense of sadness. This is not just Tim's story, it's been repeated over and over in the media.


"When I got exactly what I wanted from the Steelers, what do I do? I went out and I sabotaged it. I went out and I got high, because deep down I was afraid of the opportunity and the responsibility that came with that."

Tim played 7 years in the NFL and when he retired from the Chicago Bears, he was lost.


"I started competing when I was 10, and all of a sudden I'm 30 years old and it's over. So what do you do when the cheering stops?"

It got ugly before it got better for Tim. Even though he was in therapy and recovery programs, he hit the bottom and after a publicly broadcast incident with a Smyrna, GA traffic officer, Tim ended up spending 23 days in jail.


"God answered my prayers. He saved my life. He put an angel in a cop's uniform to stop me in my tracks, to save my life that night."

While he was living out his sentence, Tim shifted into a sense of self that wasn't defined by his athletic successes and failures. With the same discipline and determination he had shown on the field, Tim stepped out onto a new path as a life skills consultant who is to this day changing the lives of young athletes and all who hear him speak or receive his one-on-one mentoring.

Recently, I found myself sitting in the bleachers at a high school football game. None of my three sons are involved in the sport, but we were there for the team spirit and the band.

Watching the young men on the field and my boys sitting next to me, I felt deep gratitude to Tim Worley. Perhaps people like Tim are meant to learn these important life lessons the hard way, to live these extreme lives so they can serve as teachers, guides and coaches.

Because when they say "yes" and awaken to their higher purpose, the impact they are able to make on our lives is huge. Beautiful and moving. Like an awesome touch down. Do I dare say, more lasting?

Tim Worley is a former University of Georgia All-American and NFL running back who played for the Pittsburgh Steelers and the Chicago Bears. Today, Tim is a John C. Maxwell-certified leadership educator, life skills consultant and motivational speaker at Worley Global Enterprises.