As Islamic fundamentalists encroach on the basic liberties of people in Africa and the Arab world, we hear about it, but it's hard to put it into context and understand the magnitude of the situation. Leave it to veteran, Mauritanian filmmaker Abderrahmane Sissako (Bamako) to boil a complicated social phenomena down to a simple allegorical tale that's as educational and spiritual as a biblical passage. 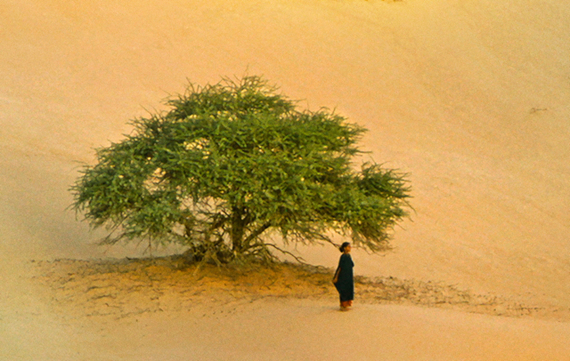 A dark cloud looms as Jihadists take over Timbuktu, Mali. The zealots have outlawed music, soccer and socializing. They're hostile to local men and particularly treacherous to women, especially those who try to make a living. They impose harsh sentences, even death, for a multitude of offenses.

Miles away in a desolate area, surrounded by golden sand dunes and only a few shrubs, a Tureg family makes a meager existence. The people around them have fled, bullied by the interlopers. Kidane (Ibrahim Ahmed) lives with his wife Satima (Toulou Kiki), his 12-year-old daughter Toya (Laya Walet Mohamed) and Issan (Mehdi A.G. Mohamed) their young shepherd, an orphan the couple adopted.

The daily indignities of the new repressed life in Timbuktu feel a lifetime away, until Issan and one of Kidane's cows is involved in an incident with a fisherman. Kidane comes to Issan's defense. That confrontation takes Kidane from a cloistered, sanguine life into the middle of a religious/cultural/political tyranny he couldn't fathom. He's soon fighting for his life.

The scourge of Sub Sahara and Northern Africa and Arab countries comes into full view in this minimalist, modern, pastoral fable. It is expertly told by Abderrahmane Sissako, whose inspiration for this cautionary tale was an incident in Mali, where a couple with two children was stoned to death because they were not legally married. Extremists were the culprits.

We read about the 200 little girls who were kidnapped, think it's a major atrocity, but don't comprehend how that kind of terrorism grinds people down on a daily basis. In just 97 minutes, an insightful script, co-written by Kessen Tall, boils down the complexities of the new fanaticism, into terms we can understand. It does it with a vignette featuring vulnerable humans who had lived life with a reasonable expectation of basic freedoms that are being stripped away, day by day.

Golden sand dunes provide a rich, mesmerizing background canvas through the lens of Director of Photography Sofian el Fani (Blue is the Warmest Color), who actually shot the footage in the towns of Oualata and Nema, Mauritania. The tightly-woven storytelling is aided by the precision editing of Nadia Ben Rachid. Amine Bouhafa's music accentuates the right scenes, from the simple family life to the harsh tribunals.

Ibrahim Ahmed's stoic portrayal of Kidane centers the movie. He makes the character lifelike, deserving of a wonderful life and not indignities. Toulou Kiik, as his loving wife Satim who is warned to cover her face with a burka or suffer the consequences, displays inner strength. Layla Walet Mohamed as the young girl Toya and Mehdi AG Mohamed as Issan, the catalyst, are perfectly innocent. Salem Dendou doesn't overplay the role of Chief Jihadist, the head of the tribunal. His interpretation of the demonic antagonist is that he is rightfully in power and serving a higher being than everyone else.

Many films take on a controversial subject and become preachy. In the hands of Sissako, the plight of thousands of people who are losing basic freedoms to militant religious fanatics is all the more devastating because he trimmed the problem down to its roots. To the basics.

Calling Sissako a brilliant filmmaker is an understatement. He comes from a tradition of storytelling that made African filmmakers like Ousmane Sembène (Guelwaar) healers, shamans and elders. Timbuktu is a masterwork from one of the world's most perceptive artists.