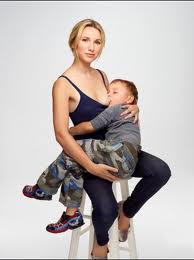 The above photo better represents Jamie Lynne Grumet as I know her.

Several years ago, during an interview with a homeopathic doctor for an ailment of mine, she mentioned she still breastfed her 5-year old son. I backed out of her office like she were a crazed circus clown gunman, never to return again to that wackjob.

If I'd seen TIME's "Are You Mom Enough?" wildly controversial cover of 26-year old Jamie Lynne Grumet nursing her 3-year old son Aram and not personally known her, I would've thought she was a wackjob, too.

Here's the thing, since meeting Jamie through our blogging community, MomsLa.com, she has shattered all of my preconceived notions about attachment parenting and the men and women who practice it.

First, her sons Aram and Samuel have no separation anxiety. They don't cling, whine, cry, pout, interrupt, throw tantrums, manipulate, coerce or hold their parents hostage in any way. When Jamie and I went out to dinner with our husbands a couple of weeks ago, leaving all four of our children with our babysitter, her boys hardly looked up to say goodbye. They were confident in their parents' reliability, well-adjusted and excited to play with our girls. Jamie and her husband are doing an incredible job of raising their boys.

Second, Jamie nursed her adopted older son Samuel when he came to live with them over a year ago. The image of her two older boys, one white, one black, nursing simultaneously in a photo on her website I Am Not The Babysitter, might have unsettled me had I not known the story behind the image. Samuel had been nursed by his Ethiopian biological mother before she gave him up for adoption. Jamie decided to try nursing Samuel in order to make the traumatic transition from the biological mother easier for her adoptive son and to let him know he was safe and he was family.

Finally, Jamie has a heart the size of Texas. She's generous to a fault. She's trusting because she's trustworthy. I'm happy for the attention her blog and her many philanthropic causes will receive due to the TIME article. But I think TIME did Jamie a disservice by photographing her in an unnatural position in a calculatedly provocative pose in order to sell magazines. The woman on the cover -- while as stunningly beautiful as the real Jamie -- doesn't reflect the inclusive, intelligent, wise-beyond-her-years, loving, nurturing, non-judgmental woman I know, a woman who would never have authored the headline "Are You Mom Enough?"

I hope, as readers get to know Jamie better through her blog and her good works (The Faye Foundation - Ending the orphan crisis in Sidama, Ethiopia through medical and family assistance), they'll meet the real Jamie. It's people like her who strive to use their influence for good.

Cheers, Jamie, I'm behind you all the way.