The 1776 Declaration of Independence was much more than a Declaration of War. It was a powerful statement of what Americans wanted to be: a society of free, independent, and personally responsible individuals. Are we still, or should the U.S. issue a new Declaration - a 21st Century Declaration of "Dependence"? 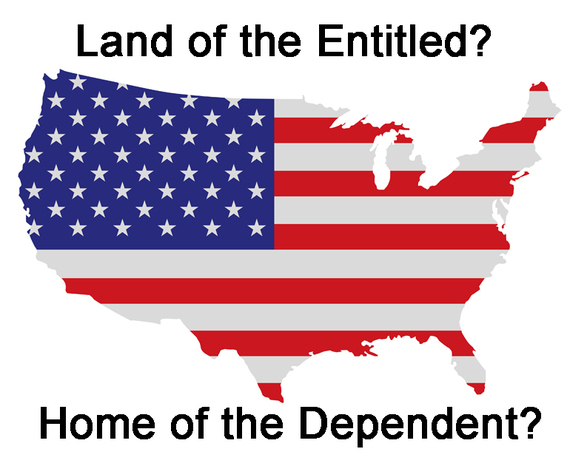 Government: source of goodness or cause of woe?
The Founding Fathers could answer this question with one word: neither! Federal government was supposed (a) serve the people by (b) doing those things individuals cannot do for themselves. This includes defense against foreign aggression; promoting interstate commerce; developing infrastructure; control of our borders; protecting the environment, etc. In the original America, a person's comfort, personal income, and health condition were all up to the individual. They were not the government's responsibility.

Rights and Entitlements
A right is a "moral or legal entitlement; a prerogative or privilege." An entitlement is a "right to have something; a claim or prerogative." Linguistically, they are synonymous.

Operationally, rights are (a) available to all citizens; (b) require no prequalifications; (c) have no natural limit; and (d) are cost-free to the entitled person. Examples include life, liberty, free speech, security in your home, due process, and the pursuit of happiness. There is no right to have happiness, only the right freely to pursue it.

Americans are not entitled to HAVE anything. Their one right is to BE free.

The Bill of Rights is functionally a Bill of Constraints, on government. All ten amendments were written to protect the one and only right of all Americans: freedom. Free speech means the government should not silence you; it does not entitle you to have a podium, microphone, amplifier and TV cameras. You are free to travel wherever you wish. There is no right to have a car or an airplane. The right to life means the government should not kill you. It is not an entitlement to life support technology in an ICU.

Independent v. Dependent
The word independent is defined as "free from outside control" and "not depending on another to be responsible or on another for livelihood or subsistence." Antonyms for "independent" include dependent (obviously) as well as subservient and entitled.

If you are a free person, there one and only one thing you are not free to do -- you cannot refuse to choose. A free man chooses -- that is the sine qua non of being free. If you don't decide, someone else will decide for you. Thereby you have abrogated your freedom.

If you accept entitlement, you reject both freedom and personal responsibility. You are not in control. Entitled people are dependent. What are Americans today? What do they want to be?

Relationship of individual to individual
There are only two ways to apportion wealth: by government control (centrally) or via free market forces (dispersed). Whatever one's preferred political or economic theory, history teaches there never has been and never will be any system where everyone has the same amount of goods and services. Human beings are human: those with power always have more than those without.

Disparate material possession -- wealth and poverty -- have always existed. The key is how poor the poor in fact are. If they have enough food, adequate shelter, and opportunities to become rich or at least less poor, that is the best possible outcome.

Forty-three percent of all Americans pay no federal income tax. That means 137,600,000 individuals depend on the remaining 182,400,000 for everything, from infrastructure through public schools to social services. Almost half of the American people are thus dependent.

Rather than redistributing wealth by government decree, we should allow market forces to reduce poverty. We need to remember the slogan that JFK borrowed from a New England regional Chamber of Commerce: "a rising tide lifts all boats." Winston Churchill warned us in 1945 about redistribution: "The inherent vice of capitalism is the unequal sharing of blessings. The inherent virtue of socialism is the equal sharing of its miseries."

Progressivism promotes Dependency
Progressives believe that government is the sole source of things that members of society need and want. President Obama epitomized this ideology saying, "You didn't build that." He meant that whatever success an individual achieves is due to the government. Progressives claim that individuals depend on the government for everything from sustenance to luxuries.

Progressive dependency extends beyond the material to the mental. Since Father (government) Knows Best, certainly better than we do, he only what he wants us to hear, not "the truth, the whole truth and nothing but the truth." Father tells us what to think.

Declaration of Independence v. Declaration of Dependence
If we choose to reaffirm U.S. founding principles, Americans should say:
oI am an American: therefore, I am free and independent.
oBeing independent means I am not dependent or entitled.
oI am independent: therefore I accept personal responsibility.
oI "deserve" what I can produce, not what I can get others to produce.
oIf I choose to provide for the less fortunate, that is a social contract I make.
oI think for myself and need hard facts to make decisions.

Dr. Deane Waldman MD MBA is author of "The Cancer In Healthcare;" Adjunct Scholar (Healthcare) for Rio Grande Foundation public policy think tank; Emeritus Professor of Pediatric, Pathology and Decision Science; and member, Board of Directors of New Mexico Health Insurance Exchange (NMHIX). Opinions expressed are solely the author's and do not necessarily reflect those of the Board of NMHIX.