A cursory internet search reveals the shocking truth for those of us who weren't there: photographs depicting a variety of howling posses composed of fire-eyed redneck thugs -- terrorists, if you will -- skulking through the woods with hounds and lengths of rope; hauling with them an American citizen of African descent, and making their way to a not-so-clandestine location where a cowardly, ritualistic, vigilante execution will take place.

Sepia-toned photographs retaining in permanent clarity the faces -- the proud, grinning white "men" gathered like hyenas around the mangled corpse of a black man who had been beaten and hanged by these reactionary monsters. As if the deeds themselves weren't shameful enough, these ghoulish lynch mobs would often take away souvenirs of their homicides: body parts, clothing, hair -- and those terrible photographs.

There are too many of these images. There are too many stories -- more than enough to justify any thinking-person's reluctance to pledge unconditional pride in the entirety our national heritage -- a heritage which includes a 1922 U.S. Senate filibuster against an anti-lynching law.

This isn't ancient history. These aren't isolated incidents. Perhaps as many as 4,000 American blacks were lynched in the eight decades following the end of the Civil War.

Similar events, in practice and symbolism, occur even today. As recently as last year, nooses were used to intimidate African-Americans. The noose, it seems, has become a newsworthy issue in the fourth American century. Almost exactly ten years ago, in 1998, a black man was tied up and dragged behind a pick-up truck in Jasper, Texas until his body was so decimated it was practically unrecognizable as being the remains of a man.

So there's no reason why Bill O'Reilly should be surprised when reasonable, rational, thinking Americans want him to be summarily fired for using the word "lynching" in the context of a rant about Michelle Obama. The outrage is righteous and justified. Words matter. And history shows that these words that Bill O'Reilly invoked cast a long, sinister shadow.

You've probably read the quote here and on other websites, but I want to make sure Bill O'Reilly's bigotry is seared into the record, so I'll post it here again:

And I don't want to go on a lynching party against Michelle Obama unless there's evidence, hard facts, that say this is how the woman really feels. If that's how she really feels -- that America is a bad country or a flawed nation, whatever -- then that's legit. We'll track it down.

Lynching? Party? Unless there's evidence? So we're to understand from Bill O'Reilly that if someone might be relating a certain level of dissatisfaction with America's present status and chief executive, that they deserve to be tracked down by Bill O'Reilly's Lynch Mob?

It doesn't even matter what Michelle Obama said. We do know that FOX News repeatedly misquoted Mrs. Obama's statement and regardless of what she said, nothing -- no words, intentions or deeds justify the unhinged spike in Bill O'Reilly's bigoted, splotchy blood pressure to the point of wanting to "track it down" with his "lynching party." She could've said something like, "Bill O'Reilly is a splotchy dillweed who enjoys savory, soapy shower falafels," and it still wouldn't justify this flagrantly racist "lynching" analogy. 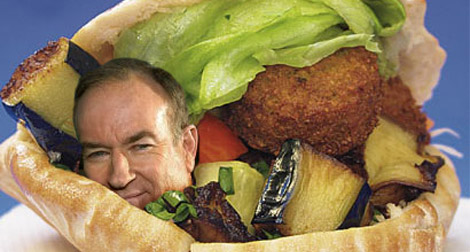 And if it wasn't intentional, then it has to be pegged as gross incompetence, and this asshat -- this spastic Morton Downey Jr. throwback, this serial liar -- should, in fairness, be fired anyway. But considering Bill O'Reilly's record, incompetence only explains half of it. The rest falls in line with a pattern of well-documented bigotry.

It's not just his flippant threat to "lynch" Michelle Obama. It's the Sylvia's Restaurant rant. It's the wetback remarks. It's the white power remarks. All of it. How many other reporters, personalities and celebrities need to be suspended and fired while Bill O'Reilly, time and time again, gets a pass? Instead, FOX News and Roger Ailes enable his prime time behavior because Bill O'Reilly's radio and TV shows are, of course, somewhat popular among similarly simplistic dolts.

He clearly doesn't understand the repercussions of this kind of race-baiting language. And that indicates a staggering lack of understanding about what sorts of reactionary people are dialed in. Likewise, when Malkin, Coulter and Beck (among others) use Senator Obama's middle name or deliberately mispronounce his last name as a pejorative, epithetical attack -- knowing the prejudices of their ignorant far-right orcs -- they indirectly incite violence against the senator and his family. NBC reported that the hate mail the Obamas received last year prompted the U.S. Secret Service to offer protection earlier in the campaign than is usually the custom. We can only imagine the menacing content of the mail, and we'd be lying to ourselves if we assumed it didn't have anything to do with the race-baiting, epithets and rumor-mongering assaults from these far-right shmendriks.

But I don't think Bill O'Reilly should be fired. Don Imus was fired and eventually reappeared -- moaning for braaaaiins! on another radio network. I'm sure the same pattern would occur with O'Reilly. He'd go away for ten months or so, and then like a giant, splotchy cancer he'd reemerge on CNBC, replacing Glenn Cock -- WHOOPS! I mean, Glenn Beck. I'm sorry about that. Beck he has such an unfortunate last name.

Bill O'Reilly must resign in disgrace for the good of the nation. He should publicly apologize to the Obama family and then, on that same show, he should resign. When he leaves the FOX News building, his FOX News Goon Squad and Tubby Stalking Intern-bots should be ordered to stand down while random passers-by are asked to pelt Bill O'Reilly with eggs, tomatoes and, naturally, falafels -- live on Countdown with Keith Olbermann. Then he should volunteer to walk around midtown Manhattan wearing a sandwich board that reads: "Ask Me About My History Of Racism (And Free Cell Phone Offer!)"

This is voluntary justice. This requires you, Bill O'Reilly, to own up to your racism and your incompetence and be man for once. Do you have the dignity, Mr. O'Reilly? Or will you, by not admitting to your racism and by not resigning, vindicate those of us who agree that you're nothing but a coward? Resign, Bill. After all, unlike you and your Stalking McCarthyite Schutzstaffle -- your "Lynching Party" -- we're not a mob out for vengeance. This punishment, Mr. O'Reilly, is entirely up to you.