The two sides in the fight over the Keystone XL were put in sharp relief this morning in Washington, D.C.

Over at the headquarters of the American Petroleum Institute, the largest front-group for the fossil fuel industry, PR flacks were scrambling to pull together a conference call with reporters to trot out more misinformation about the pipeline.

Meanwhile, over at the White House, 48 environmental, civil rights, and community leaders from across the country joined together for a historic display of civil disobedience to push President Obama to deny the Keystone XL and address the climate crisis.

Now, it's time for President Obama to choose which side he's on. He can side with the fossil fuel industry and people like API President Jack Gerard, who was a top Mitt Romney supporter, and the Koch Brothers, who would reap huge benefits from Keystone XL. Or, he can stand with the coalition of environmentalists, ranchers, farmers, young people, labor unions, and civil rights groups who have come together to oppose Keystone XL. 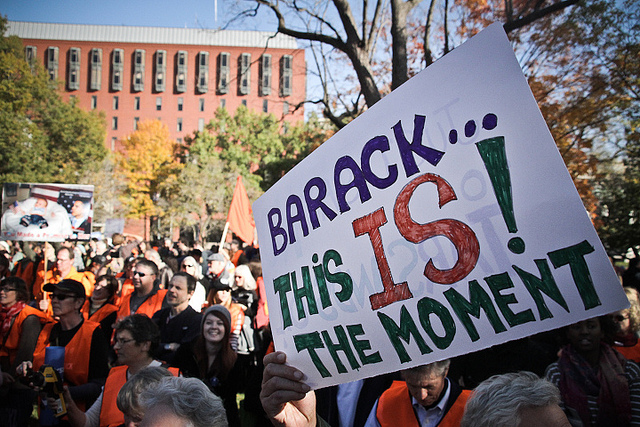 That coalition, and the people arrested at this morning's demonstration, are the same people who helped elect President Obama and can now help push forward his agenda.

It includes business leaders like Danny Kennedy, the CEO of Sungevity, a solar company in California that is pioneering new ways of massively scaling up solar installations (and creating lots of new jobs in the process); civil rights heroes, like Julian Bond, who helped found the Student Nonviolent Coordinating Committee and served as the president of the NAACP; ranchers like Randy Thompson, who has been leading the fight against Keystone XL in Nebraska and came all the way to D.C. today to get arrested at the White House; and student activists, like Jacklyn Gil, the daughter of two Colombian immigrants who is now leading a fossil fuel divestment campaign at Brandeis University and joined the protest this morning. 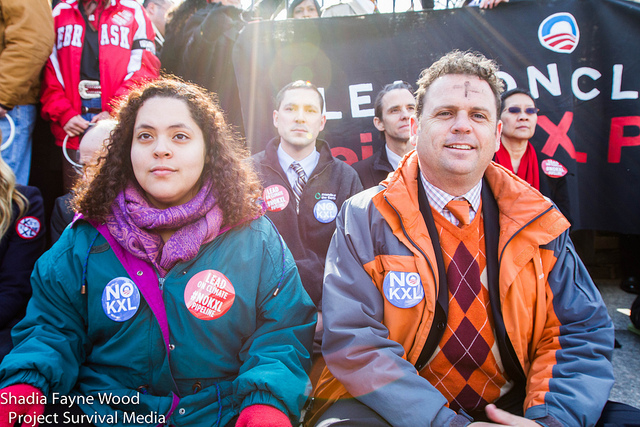 Yes, the fossil fuel industry has most of the money. But we've got the people. This Sunday, tens of thousands are expected to attend the "Forward on Climate" rally here in Washington, D.C. to push the president to live up to his climate rhetoric. Volunteers have organized over 100 buses to bring people from all across the country. Hundreds of students, many of them also working on this growing fossil fuel divestment campaign, are coming into town.

President Obama should be familiar with the feeling of energy and momentum in the climate movement right now: it's the same grassroots spirit that powered him to the White House in the first place.