As an important United Nations meeting of the Commission on Narcotic Drugs (CND) started in Vienna this week, diplomats from around the world were confronted with a spectacular installation of giant black and white photos. 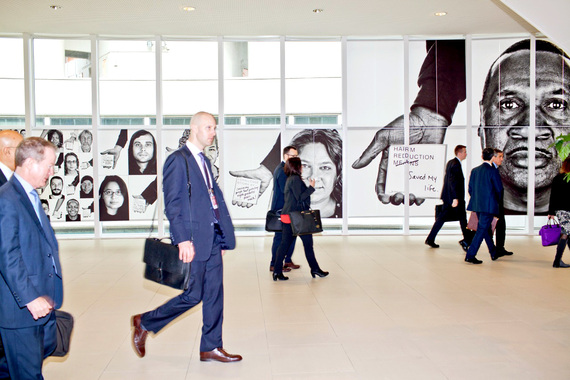 The photos were shot at last Fall's Harm Reduction Coalition conference and each image involves a portrait and a message. One image of New Yorker Terrell Jones is 14 foot tall, stretches floor to ceiling and covers a total of 8 window frames of the UN headquarters in the Vienna International Center. His straightforward message of 'harm reduction saved my life' is in stark contrast to the UN resolutions that emerge from CND as none of which have used the term harm reduction even though it is national policy in many countries around the globe. 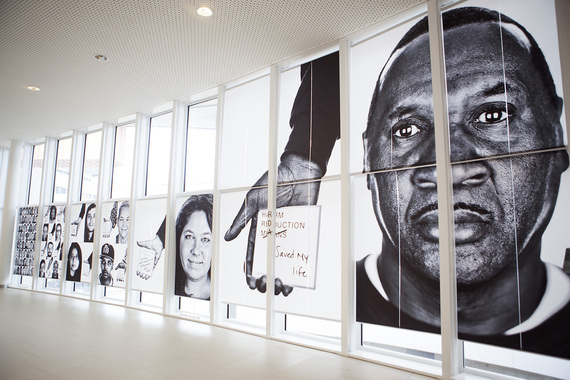 This CND meeting will set the parameters for next year's UN General Assembly Special Session on Drugs (UNGASS) scheduled to take place in New York City next April 2016. Latin American countries have called for the New York meeting to be an open, unfettered discussion. However there is resistance from many countries to have a wide ranging debate. They would like to see the meeting limited to a review of global drug targets set in 2008. This leaves such questions as harm reduction, death penalty for drug crimes, treaty reform, drug decriminalization and regulation unexplored. In other words, issues germane to global drug policy will remain off the table. As the photo exhibit reminds delegates, UN Secretary General Mr. Ban Ki Moon has himself said: "I urge Member States to use these opportunities (UNGASS 2016) to conduct a wide-ranging and open debate that considers all options."

Alongside the photo installation Harm Reduction International is launching its '10 by 20' campaign, calling on governments to redirect 10 percent of the resources they spend on drug control to harm reduction by 2020. At present, governments pay out an estimated $100 billion each year on drug control and law enforcement, while investing just $160 million in harm reduction -- only 7 per cent of what is needed. With the UN target to halve HIV infections among people who use drugs more than 80 percent off track, this redirected money would support health interventions that can eliminate blood borne HIV transmissions. Vitally, it would also lower hepatitis-c rates, provide access to AIDS and hepatitis C medications, reduce deaths from overdose and provide access to drug treatment to people in need. Money would be going to an arena of proven success. It would be a major step forward in realigning the way that the world addresses drug use.

We are not asking for new money. We are asking that public money be better spent on interventions and health services that truly work. We cannot continue to rely on a punitive approach.

The last window display of the installation is a sea of faces impacted by drugs. Photographer Matt Slaby says he wanted to bring the images of real people into the bubble of the UN.

"For too many diplomats, the issues they discuss are divorced from the real lives of people living with their own drug use or their former drug use or drugs in the community. I wanted to bring that reality into the UN."

The last UNGASS on drugs was held in 1998. The meeting took place under a quixotic slogan A Drug Free World. We Can Do It! This declaration committed member states to eliminating, illicit production of coca, cannabis and opium, as well as achieving large scale drug demand reduction within 10 years. There is no reason aside from the lack of political imagination that the next years cannot be the harm reduction decade.