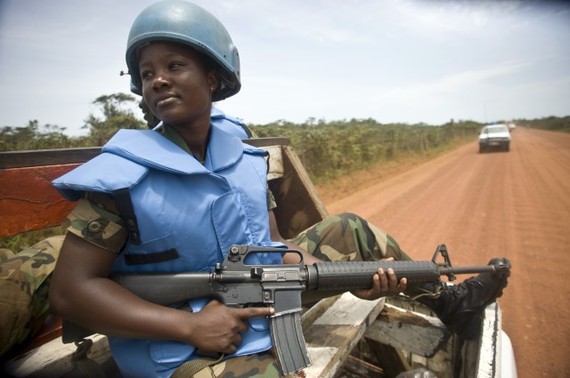 Gender needs to be "mainstreamed" across peacekeeping. A member of a Ghanaian female peacekeeping unit in Liberia (2009). UN Photo/Christopher Herwig

"Gentlemen, there are no bad soldiers, only bad officers", said Napoleon Bonaparte to his military staff after they complained that the poor quality of soldiers was inhibiting success on the battlefield. We as former Army officers, totally believe in the sage words of Napoleon.

In the face of some vile and sickening allegations of sexual abuse and exploitation among United Nations (UN) peacekeepers, questions the moral integrity of the people who are commissioned to be protectors, but who end up abusing the trust bestowed on them. Thus tarnishing the reputation of the entire UN.

However, incidents where troops seconded to the UN by member states under its command become sexual predators to the helpless civilians under their care have continued to present a cyclical challenge to the United Nations.

The Secretary General of the UN, Mr Ban Ki-moon recently called the rogue peacekeepers "a cancer in our system." He added that, "a failure to pursue criminal accountability for sexual crimes is tantamount to impunity".

According to recent reports from UN, allegations of sexual exploitation and sexual abuse by United Nations peacekeepers rose by from 52 in 2014 to 69 last year. There are currently 16 peacekeeping missions worldwide, out of which 10 were subject to allegations last year.

The allegations involve military personnel, international police, other staff and volunteers. Sadly, there does not seem to be much reason for optimism that most of these allegations will ever be investigated and concluded with any degree of closure. This can be illustrated by the case of the Central African Republic, where there has been only one criminal charge filed in the 42 cases of sexual abuse or exploitation that have been officially registered in the mission.

In a December 2015 report responding to latest claims of sexual abuse by peacekeepers in the Central African Republic, the UN recommended investigations to identify weaknesses in enforcement and mandated that a component on sexual exploitation and abuse be included in training for peacekeepers. It also called for harsher penalties for the peacekeeping units to which the abusers belong.

In 2015, the post of Special Coordinator on improving the UN's response to sexual exploitation and abuse was established. Mr Ban named Ms Jane Holl Lute, a US military veteran with wide-ranging UN experience, to coordinate efforts to curb the scourge.

The report also asked member states to provide a fair investigation process for both staff and military personnel, to provide better reporting mechanisms for victims and staff, and to take action on those in positions of responsibility who turn a blind eye or cover up.

For the first time, the organization also introduced a "name-and-shame" policy for countries whose soldiers are accused of transgression.

Still, structural weakness mean that the slow pace of investigations into abuses is set to continue. Under UN rules, it is up to the country that contributes the peacekeepers to investigate and prosecute any soldier accused of misconduct while serving under the UN flag. In many cases, those governments conduct only half-hearted investigations and only a smattering of convictions has been documented.

It is time to raise the scales of preventive and punitive measures. An unequivocal message needs to be sent to every member state and troop contributing countries that only personnel who see the protection of human rights as their mission will continue to serve as UN peacekeepers.

For starters, those that are accused of sexual misconduct must face the full force of justice in the mission area. The military chain of command should set up court proceedings without delay and award punishments comparable to the gravity of offences committed. Commanders at all levels must be held responsible for the discipline of their troops. A message of "zero tolerance" be clear and unambiguous.

In most countries where UN peacekeepers are deployed there is no proper functional government or rule of law in place. Therefore independent arbitration organs should be established in mission countries not only to expedite cases but also to provide confidential avenues for conscientious staff and soldiers to report abuse without fear of victimization or reprisals. This will hopefully serve to end impunity. Therefore, Napoleon's counsel be heeded: military leaders at all levels of command should assume the onus of ensuring that every soldier going on mission is properly trained and prepared to deal with the stresses of peacekeeping.

The abuses will only be prevented if the military command in the operation decides to enforce the law without equivocation and without fear or favour. All soldiers, at pre-deployment training, be instructed that peacekeeping includes the power to prevent sexual exploitation and abuse.

More skilled and trained female peacekeepers can only be an asset to peacekeeping operations. UN resolution 1325 emphasizes the vital role of women in conflict resolution, and calls for more women in decision-making positions. Gender needs to be "mainstreamed" across peacekeeping and for more women to participate in field operations in military roles as police and as human rights observers. A training course piloted in India aims to equip female military officers in peacekeeping missions to tackle sexual and gender-based violence.

Ambassador Samantha Power, the US Permanent Representative to the UN in New York, said that there is a "great deal of horror, outrage and a sense of collective failure". She's spot on. Member states have to take responsibility, big or small, rich or poor.

UN peacekeeping missions must be seen as the standard-bearers for human rights in fragile states and those recovering from the ravages of war and conflict.

Otherwise the work of UN agencies, such as UNDP, UNICEF, UNHCR, UNFPA, UN Women, UNAIDS, OHCHR, who are working tirelessly every day to end gender based violence, advance gender equality and child rights, promote women's rights and empowerment of all women and girls, risks being jeopardized. And their moral authority undermined.

Lieutenant-General(rtd) Daniel Ishmael Opande , was Kenya's Vice-Chief of General Staff and had served as the Force Commander of the United Nations Missions in Liberia and Sierra Leone. Siddharth Chatterjee is Kenya representative for the UN Population Fund and is a former special forces officer from the Indian army.