My grandfather, Azad Torigian, was 6 when the Armenian Genocide began. He came from Darmon, Keghi, in the area of Ezermun. Sometime in high school, my family, including my grandfather, began to tell me the story of his childhood, the nightmare of living through a genocide.

Azad told me of the death around them, of being marched and being hungry. He spoke of the women throwing themselves and their children into the Euphrates River to escape the hands of the persecutors. He told me about his flashbacks from trauma: every time he crossed the Mississippi River close to where he settled in Illinois, disturbing visions continued to rush back into his mind, never to completely disappear.

While attaining my undergraduate degree, I completed further research into the atrocities of the Armenian people. It went beyond just displacing an ethnic group. This was ethnic cleansing. People were marched to their death -- toward a hole in the ground in the wilderness. Women were assaulted. Some were even crucified. People were killed as they marched to their graves.

In my research and listening to stories, I heard the complexities of experiences. In my great-aunt and great-uncle's story, a family of Kurds who knew my great-grandfather welcomed them into their home. In a number of stories, unlikely neighbors, some Turkish and Kurdish families, stood against the oppressive system in love for their neighbors.

Unfortunately, like so many genocides and atrocities around our world and even our country, we don't speak out when seeing people tortured, mostly because of fear. Azad's son, my father, taught his social studies students the quote by George Santayana, "Those who do not remember the past are condemned to repeat it." How many genocides have we heard of in the past 98 years? How does remembering one genocide stop further massacres from happening?

Because people in our world stopped speaking of the Armenian Genocide, Adolf Hitler thought he could get away with the Holocaust: "Who, after all, speaks today of the annihilation of the Armenians?"

When we choose not to remember or share stories, other groups of people, from Jews in Europe to Muslims in Bosnia, experience the trauma of exile and annihilation. As time goes on, more survivors of these genocides die. Without their stories, more and more people deny these massacres ever happened.

The Armenian Genocide started April 24, 1915. Each year, on or around that date, I take time to remember the Armenians and the story of my grandfather. I fellowship with other Armenians to share our common story.

Remembering stories of genocides connects us to all of humanity. No group of people should ever be oppressed, beaten and killed for any reason: for their religion, ethnicity, race, gender, sexual orientation or disability. When we are able to speak out loud the stories of those who survived the Armenian Genocide of 1915 and other violent situations, we stop the spread of oppression in our world.

Speaking the stories of the Armenian and other genocides isn't about holding on to hate. Granted, I find myself disappointed when I hear people denying this genocide happened. But the children and grandchildren of the oppressors were not the ones committing these crimes. Like us, they are also children of God.

I believe that we can stand up for the voices of those who survived and perished in the genocide AND still love those who outright disagree with us. Matthew 5 recalls Jesus saying, "You have heard that it was said, 'You shall love your neighbor and hate your enemy.' But I say to you, love your enemies and pray for those who persecute you, so that you may be sons of your father in heaven." If we build relationships with those who disagree with us, maybe they will learn something from our stories. We will grasp the power to end the cycle of hate in our world. The power is no longer in the hands of those who have oppressed but those of us who seek reconciliation.

Even when groups of people or individuals in our society continue to deny that genocides happen, this will never keep survivors in exile. Every time we remember, the wilderness is left behind. God is the God of justice, hope and restoration. As it says in Isaiah 40:4 "Every valley shall be lifted up, and every mountain and hill be made low; the uneven ground shall become level, and the rough places a plain."

To those who have survived traumas and those of us who love them, let us strive to keep stories alive. Let us make sure that our fellow Armenians and fellow humans never find this wilderness again.

Time in the Wilderness: Remembering the Armenians
Armenian Genocide Memorial 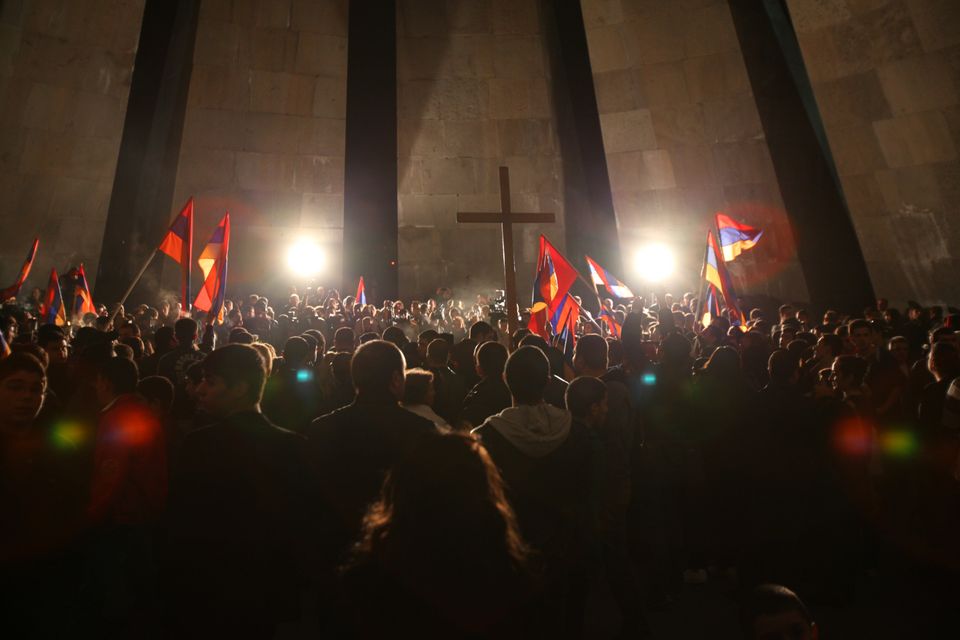