"In this series, I wanted to heal not only my body, my family, but our world."
Chris Twomey from "Parallax." 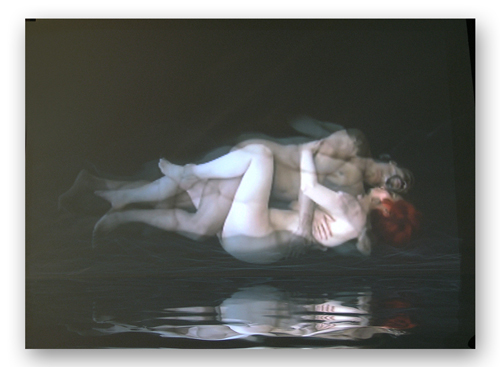 Call it Spring fever, call it the March Madness of the art world, but AC Institute in Chelsea looks and feels downright sexy with the revival of Chris Twomey's thought provoking yet oh-so-pleasurable 2009 installation. "'Triumph of the XX' evokes the passion of the XX chromosome (female) in their ability to heal a flaw or mutation in the DNA by recombining and backing up since there are two Xs," says the artist. "A red-haired woman is the metaphor for this concept, as she recombines the genes of the world, healing division."

On the heels of the publication of Parallax - Time, Media and Significance -- compelling personal narrative and commentary woven with a survey of her remarkable works to date -- Twomey, working on a new series, managed to share some of her thoughts with us.

How and when did you exploration in art of genetics begin?

I was inspired by the cloning of Dolly the sheep. The themes of my work have revolved around Origins and Identity, and what could be a more shocking assault on one's individuality than be replicated? As for origins, Dolly's cell was taken from a mammary gland, one of my favorite body parts and the source of nutrition for my children.

Also, unfortunately, I was diagnosed with breast cancer right after 9/11. I had to spend a year in treatment and learned all sorts of things about mutations and genetically inherited disease. I actually thought it was really interesting and sought out books like "The Agile Gene, How Nature turns on Nurture" by Matt Ridley and "The cartoon guide to genetics" by Larry Gonick. I really enjoyed "Why we do it, rethinking sex and the selfish gene" by Niles Eldrdge. We are such complex creatures. I wanted to include how DNA affects identity in the mix of my work. 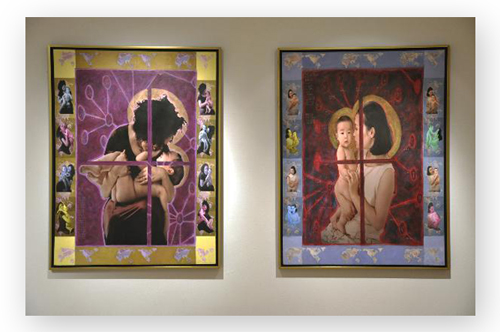 
Your range of expressive tools - painting and drawing, photography, sculpture -- is almost seamless? do you have a favorite medium or combination? How do you choose?

I see the world in many ways, all happening at the same time. This lends itself to the use of multimedia...

Sometimes I think my choice of materials is simply by attrition. After I have expressed the concept using whatever materials I used, it exciting to try something new. So, after a year or two working on a Series that includes aluminum foil, like Triumph o f the XX or Tsunami 3000AD, I will want to do something light and airy, like ASTRAL FLUFF: Carnal Bodies in Celestial Orbit. The materials and the medium with which I choose to create each series comes from the originating idea. Thus, everything in the series, plays out as aspect of that idea.

In "Triumph of the XX," I was responding to the ethnic fighting in the Middle East. I was thinking that if women were running things there wouldn't be violence that would kill the young fighters (their children). The idea in this piece was to heal the world through the mixing of DNA by a fertility-like goddess who represents the XX chromosome (female) which can repair mutation because one X backs up the other X on the chromosome. She lay with men of different ethnic background, repopulating the world and healing division. It's on aluminum foil because it is a humble substrate used by women in the kitchen to feed and nourish the family. The whispering trees carry hair pods of the various men and the woman's hair mixed, as if the pods are gestating a new kind of human. So, In that the idea comes first, I am a conceptual artist. 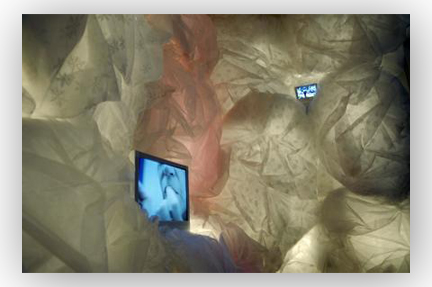 
"XX" features moving images -- when did you adopt that in art?

I come from a background in filmmaking, influenced early on by the surrealistic art films of Maya Deren, the self as subject by documentary filmmaker Jonas Mekas, and the color expressionist color fields of Stan Brakhage, as well as others. My filmmaking interest was spawned by the artwork I was making at the time, right out of college.

I was making "environments" or "happenings" which would now be called "installation" art. It included experiential 3 d involvement of the viewer in and with the work. This work was usually theatrical, with handmade sculptures, clothes, or imagery, with people creating their own relational space within the space of the piece. I also love music, having been trained in music and always included composed sound in these environments, either by me or by my friends.

As I worked, I began to see theatrical potential that could be experiential but more directed. Robert Wilson had just created "Einstein on the Beach," and Meredith Monk was doing elaborate voice/theatre productions. I started a performance group called PERFORMANCE PEOPLE and began creating "art" performance pieces.

Finally, it was just too much effort to get my friends together to put on these performances, and that is when I first began to study super-8 filmmaking. That lead to 16mm dramatic filmmaking and finally to 35 mm feature film making. I also used my boyfriend's portapak video recorder to make videos like "Unmoved" and therefore learned about videotape. That ultimately led me to a 9 year stint earning a living as an editor and producer at CBS news. After that, I concentrated on Fine Art with (almost) a full time studio practice making flat art that simply goes on the wall - something I have a hard time with, however, since I had become a mother, it was easier to manage... The minute Photoshop came out in 1984, and then the filmmaking program, Premiere Pro, I was in my element. I was able to make art film loops to create again a holistic gestalt of my various art series, which I have been doing since.


Do you relate memory and meaning to DNA?


What happens when we lose something precious, what happens when that thing is stolen, what occurs if we just get tired of it and discard it? Much of our relationship to the world is predicated on the things we surround ourselves with. The memory of that lost or stolen or discarded object, is what is left behind when it is gone. In each instance, we may feel sadness at loss or outrage at theft or boredom when we throw that object away. There are many ways our memory affects the meaning of these things.

I equate this memory/feeling to the kind of intuitive DNA knowledge we have of our own DNA heritage. It's a deep seated memory that informs what we do, and which participates in makings us who we are. In DNA, the mutations that show scientists where we evolved 100,000 years ago, are still in our respective DNA today. We carry this information around with us. Maybe that is why people believe in an afterlife or re-incarnation. They have archetypical knowledge of this DNA. I think that The genes are the driver and we just get on and off the train. So too, is memory. It is information that informs who we are, an integral part of our consciousness and being, and for all we know, maybe our memories will carry on when our bodies fail us and we step off that train. 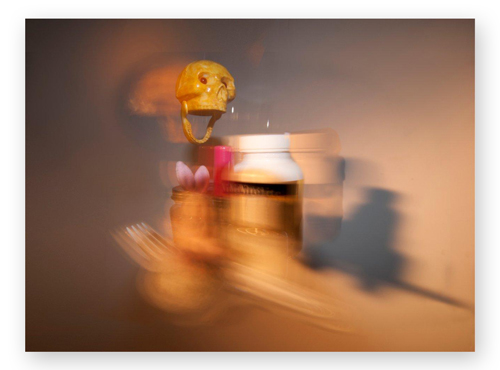 
My newest work, entitled STOLEN GOODS, is about the objects that surround us and give meaning or have lost meaning to our lives.

"Triumph of the XX" is on view at AC Institute through March 17, 2012; copies of "Parallax" are available for purchase at the gallery desk. "Stolen Goods" will premiere at HP Garcia Gallery this June. 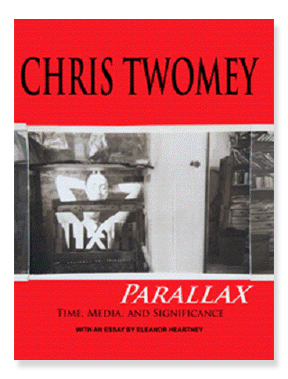