Zuckerberg has put himself on the map not only as one of the world's youngest billionaires, but also as a prominent newcomer to the world of philanthropy.

Earlier this year, he pledged $100 million over five years to the Newark, N.J. school system. Now, he's in the company of media titans Carl Icahn, 74, Barry Diller, 68, and others who have joined Giving Pledge, an effort led by Microsoft founder Bill Gates and investor Warren Buffett to commit the country's wealthiest people to step up their charitable donations.

Zuckerberg owns about a quarter of Facebook's shares.

Zuckerberg has built Facebook into an international phenomenon by stretching the lines of social convention and embracing a new and far more permeable definition of community. In this new world, users are able to construct a social network well beyond what would ever be possible face-to-face.

"I'm trying to make the world a more open place," Zuckerberg says in the "bio" line of his own Facebook page.

Born in Zuckerberg's Harvard dorm room, the site has in six years grown to more than 500 million users worldwide and a dollar worth in the billions.

Facebook was the subject of director David Fincher and screenwriter Aaron Sorkin's film "The Social Network." It features a dark portrayal of Zuckerberg by Jesse Eisenberg, as well as the direction he's taking his company and his status as one of America's most influential figures.

The film has been picked as the best of the year by the New York Film Critics Circle, the Los Angeles Film Critics Association and the National Board of Review. On Tuesday, it received six Golden Globe nominations, including best picture, drama, going up against its chief rival, the British monarchy tale "The King's Speech," which led with seven nominations.

Time's "Person of the Year" is the person or thing that has most influenced the culture and the news during the past year for good or for ill. 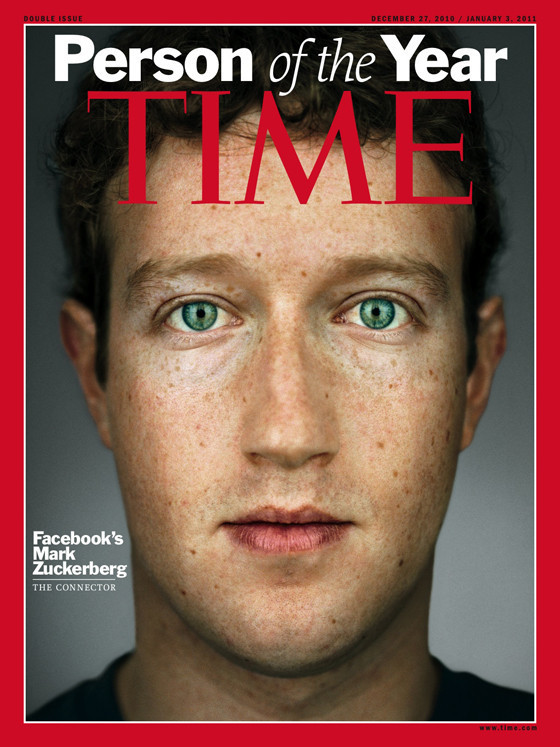