Pope Francis has been named Time magazine's Person of the Year for 2013. 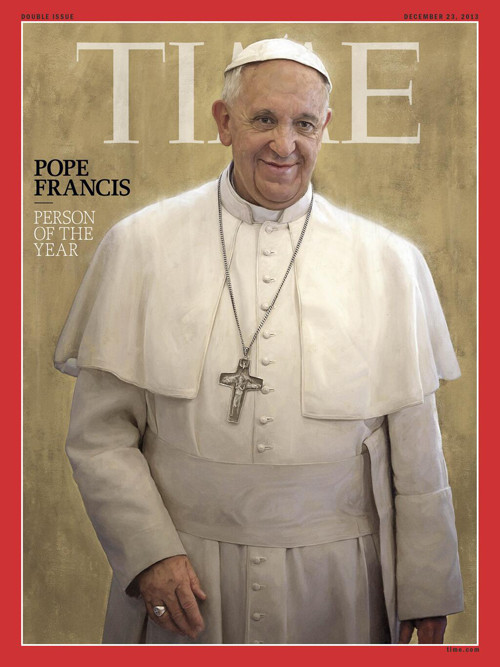 "In his nine months in office, he has placed himself at the very center of the central conversations of our time, about wealth and poverty, fairness and justice, transparency, modernity, globalization, the role of women, the nature of marriage, the temptations of power," she said. "When he kisses the face of a disfigured man or washes the feet of a Muslim woman, the image resonates far beyond the boundaries of the Catholic Church."

Vatican spokesman Father Federico Lombardi sent a message from the Vatican on Wednesday, on behalf of the Pope:

"The Holy Father is not looking to become famous or to receive honors. But if the choice of Person of Year helps spread the message of the gospel-- a message of God's love for everyone-- he will certainly be happy about that."

Edward Snowden, who made waves in 2013 with his leak of secret documents about N.S.A. surveillance activities, was the magazine's second choice. Some criticized Time for not choosing Snowden for the top slot, saying that the title had gone with a safe, popular decision instead of the right one. Gay marriage pioneer Edith Windsor, Syrian president Bashar Al-Assad and senator Ted Cruz rounded out the top 5 slots.

Time said that it was the Pope's dedication to "humility" and his fight against poverty, among other things, that solidified its top choice this year.

Earlier in July, the Pope was also named "Man of the Year" by Vanity Fair Italia.

Tell us what you think of Time's 2013 pick in the poll below: