A powerful story about Iranian women using social media to defy government restrictions on dress has gone viral this week, highlighting the importance of personal choice when it comes to the issue of hijab. However, not all the coverage about Masih Alinejad's "My Stealthy Freedom" page has been quite so empowering.

TIME drew sharp criticism after posting their story about the "My Stealthy Freedom" movement on Facebook with the caption, "Seriously, the must-wear-hijab thing — probably a pain during summer." 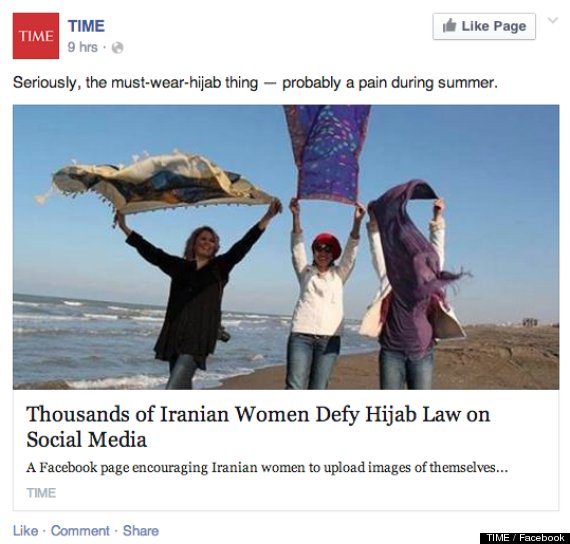 The hijab is a veil that covers a woman's head for the purpose of modesty. Some Muslims consider it a religious obligation, while others disagree. Hijab is also partly cultural, and it's more common in some Muslim-majority countries than others.

Ironically, some of the submissions on the My Stealthy Freedom page made it clear that they found the mandatory hijab law oppressive, not necessarily the hijab itself. Many hijabis consider veiling an empowering practice, not a seasonal inconvenience.

A lot of women were offended, and explained why the caption was so problematic in the comments.

Time I'm a Muslim woman I choose to wear hijab. I'm an intelligent individual and an advocate for social justice especially woman's rights. I must say it's really ignorant of you to caption the photograph with an opinionated view that isn't even scientifically sound. The more your skin is exposed the higher your body temperature and therefore even Christians in such areas take cover. Also since when is Iran only hot? There are other seasons, why harp on the must get hot theory.. Poorly done. Disappointed to the max.

This caption is irrelevant and insensitive. It isn't a pain because I choose to wear it.I am an ivy league educated woman and a future physician. To denigrate the entire hijabi experience to discomfort is unacceptable. I am a subscriber to TIME and I will be canceling my subscription. Your perpetuation of stereotypes disgusts me.

Others took to Twitter with the hashtag #HijabIsAPainInTheSummer to mock the insensitive observation.

Oh so the women in Iran took their hijabs off because #HijabIsAPainInTheSummer ! @TIME caption

I am so glad .@TIME has figured out the reason behind Muslim women's pain. Culprit was seasonal hijab all along. #HijabIsAPainInTheSummer