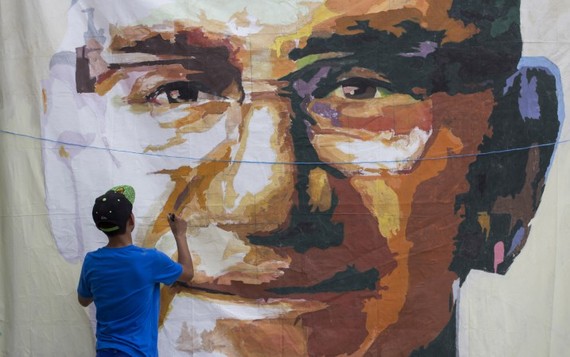 I will be in El Salvador this weekend as a witness to the beatification of Archbishop Oscar Romero, who was assassinated on March 24, 1980, on the eve of El Salvador's 12-year civil war. This is the last step before what many of us hope will be sainthood.

As a Catholic, I am proud of my Church for finally recognizing this man of God who lived his faith. As a politician, I continue to be inspired by Romero's example -- his total commitment to the poor and his unwavering commitment to the dignity of every human being.

Romero's calls to end the violence afflicting his nation and his solidarity with El Salvador's poor appealed to me as a college student in the late 1970s. I still remember learning about his murder and believing that this terrible crime would result in the termination of U.S. aid to a government and military that persecuted social justice activists and had no respect for human rights. Sadly, it did not.

The U.S. continued to finance the Salvadoran armed forces for the next decade. While Congress expressed concern about human rights issues, it wasn't until Congressman Joe Moakley courageously offered and Congress passed an amendment in 1990 to cut aid that the blank check stopped. And that was after the deaths of nearly 80,000 civilians, the murder of human rights defenders, labor leaders, nuns and then six Jesuit priests and two women in 1989. I traveled to El Salvador many times during the 1980s and saw firsthand the brutality of the Salvadoran government and military supported by my government. I felt ashamed.

Reagan and Bush administration officials routinely turned a blind eye to torture, disappearances and murder. They characterized anyone who questioned the human rights record of the Salvadoran government as an ally of the Faribundo Marti National Liberation Army (FMLN) -- the armed opposition. They belittled and tried to discredit those -- like Romero and the Jesuits -- who dared to speak the truth.

For Romero, the truth about El Salvador came later in his life, as he rose in the Church hierarchy. In the mid-1970s, he served as bishop of the rural diocese of Santiago de Maria, where the gap between coffee plantation and other landowners and campesinos was obvious. He saw for himself the suffering and cruel repression of the poor, which affected him deeply and triggered a process of reflection and change. This process culminated with the 1977 assassination of his close friend, Jesuit priest Rutilio Grande, who embraced liberation theology, which puts the poor and the oppressed first and prioritizes the concrete defense of their rights. After Grande's murder, Romero said, "When I look at Rutilio lying dead I thought, `If they have killed him for doing what he did, then I, too, have to walk the same path.'" Indeed, Romero believed "those committed to the poor must share the same fate as the poor."

Romero became a voice for those who had no voice; he preached that everyone was important. He embodied hope for the millions of people in El Salvador who were forgotten and the targets of repression.

The ceremony this weekend in El Salvador gives all of us an opportunity not only to reflect on Romero's life, but also to commit ourselves to policies aimed at alleviating poverty and promoting non-violence in El Salvador and around the world.

The sad fact is that El Salvador and the international community have largely failed in transforming Romero's words into action. We continue to witness thousands of young children and families fleeing Central American countries as a result of extreme poverty and violence. Even in the United States, the gap between the rich and the poor continues to grow and justice on too many occasions fails to work for those stuck in poverty. Hundreds of millions around the world are hungry -- even though hunger is a solvable problem; and war and violence seem to be the first choice to deal with conflicts.

I am hopeful that the power of Romero's message can inspire new activism on behalf of the poor and a better understanding of their plight and struggles -- in El Salvador, the United States and around the world. Romero reminded us, "There are many things that can only be seen through eyes that have cried." With the beatification of Romero, we have an opportunity to renew our commitment and honor his legacy by giving a voice to the poor and neglected in every nation. Now is the time to stand on the right side of history and help those who need it most.