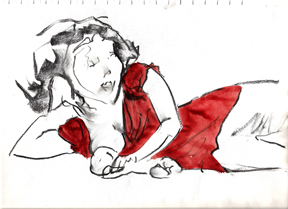 I had my first day back in the studio yesterday after having a baby. Armed with the little wriggling, giggling babe, a bunch of blank prepared canvases, and a plan for paintings that I had drawn up a month before, I stepped gingerly into the cold white studio.

I say gingerly because I was worried that this trip to the studio would confirm my worst fears: that my painting career was over; that having a baby would make it simply impossible to paint because of crying and changing and feeding.

When I first found out that I was pregnant I stopped using oil paint. And I really miss the slick, slithery liquidity and languishing dry times of oil paint. I miss the sweet smell that would welcome me as I entered the studio. Now it is the slightly off smell of acrylic that clocks me as I come to work.

Painting is as much an act of thinking as it is the mechanical process of drawing a paint laden brush across canvas. Before giving birth I had great plans for my upcoming paintings. But I was so big that seeing my toes was a fond memory and the threat of knocking things with my protrusion prevented me from carrying out my plans.

Now, I had all these plans and canvases and all I needed to do was paint them. I had visions of trying to paint while bouncing an inconsolable baby, jostling lines and spit up on the canvas.

Before going into the studio I set up a little mini studio at home; a tarp and a kitchen table. There, in the few seconds that I could grab between emptying the dishwasher and changing nappies, I managed to create some of the worst images I have ever painted. Puke colored landscapes and big View image" target="_hplink">nostriled gremlins.

In the studio, as the little baby slept like a contented kitten on the bed I created, I had just enough time to jump up and scribble and slather. Punctuating my painting with nursing on the far side of the studio, I had the time to gaze at the painting and plan my next move.

As it turns out, this process rather fits my style. I have time to think about how to craft my swirling, free and expressive brushstrokes. Time to think about stokes that I should leave out, time to consider my compositions, and time to be a mom. 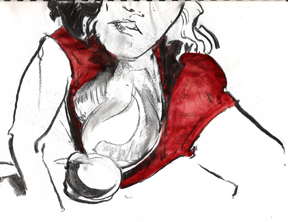 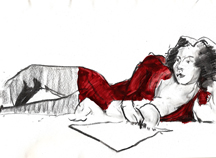 These three were drawn with my left hand; my right was occupied directing Winston to my bosom. With the red of the shirt I wanted to remind the viewer of my womanhood, my scarlet streak. I am happy to cut off the face; right now my identity is defined by the two orbs of my bosom and my baby. The perforations of the edge of the paper are hinting at utilitarianism or the 'every day'.

This is a piece that was on my painting plan. It is an amalgamation of the sketches that I did of life in a bar. I am interested in gesture, line and the language of long lingering looks. Like a wildlife photographer crouched in the tall grasses of the Serengeti, I am an anthropologist of Hollywood nightlife. The striations of the dragged paint and the daubs of black paint are reminiscent of notes dancing across sheet music. 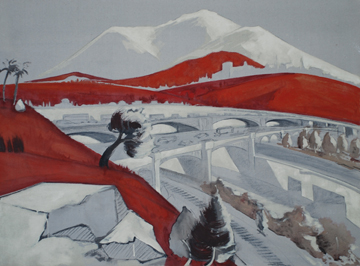 This is unfinished. It is a continuation of a rather unsuccessful series that I am still trying to perfect. It is a landscape painting that marries the shapes of nature with manmade forms; highlighting the beauty in the sinuous lines of freeways, municipal water management systems, and railroads.