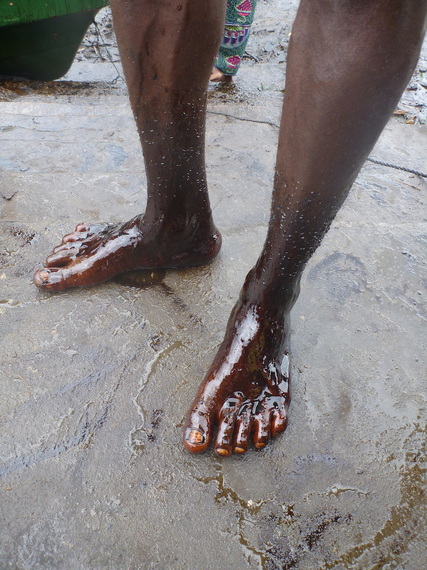 The Niger Delta's legendary "blood oil" disaster has persisted for decades, and is now deepening. Oil in the Delta fuels a dangerous mix of environmental devastation, a violent militancy that has killed thousands, human rights abuses, corporate greed and exploitation, epidemic corruption, massive oil theft, sabotage, repression, poverty, anger and despair. It is time to put an end to this ongoing atrocity, once and for all.

The 30,000 square mile Niger Delta -- including rich coastal waters, islands, mangroves swamps, and rainforests -- was once one of the most productive and diverse ecological habitats on Earth. But today, after 60 years of oil extraction, the region's environment and society are devastated -- a textbook example of the "oil curse."

The Delta is arguably the most severely oil-damaged environment anywhere in the world. A decade ago, our team of scientists conducting an oil damage assessment in the Delta estimated that each year, some 250,000 barrels (10 million gallons) of oil spill there, an amount comparable to that of the 1989 Exxon Valdez spill in Alaska -- each year for 50 years. Oil operations have also caused extensive habitat degradation from road building, forest clearing, dredging and filling, thousands miles of pipelines, and chronic pollution from gas flaring and drilling wastes.

Our 2006 team estimated the financial damage from oil in the Niger Delta to be in the tens of billions of dollars, and we recommended compensation, an immediate upgrade of all oil pipelines and facilities, and a comprehensive spill cleanup and restoration program. Subsequent assessments, including by the U.N., confirmed our conclusions and recommendations. Unfortunately, little has progress has been made since.

Despite hundreds of billions of dollars earned from oil, the region's 30 million residents, mostly subsistence fishermen and farmers, remain some of the most impoverished people in the world. They eat oil-contaminated food, drink toxic water, breathe polluted air, and are chronically unhealthy, with average life spans less than 50 years.

Along with environmental devastation, the lack of financial benefits for local people has fueled a violent militancy over the past two decades, killing thousands, destabilizing the region, and preventing sustainable development. Nigeria's "blood oil" first came to international attention in 1995 when the military government executed the Ogoni Nine, a group of tribal activists protesting the damage and inequities from oil, including writer/activist Ken Saro-Wiwa. In 2009, Shell paid $15.5 million to settle claims brought by the families of the Ogoni Nine, who asserted that Shell had conspired in the executions.

The "blood oil" business model for companies in the Niger Delta is simple: produce as much oil as quickly and as cheaply as possible; exploit inadequate government oversight; cut corners (and costs) on safety, monitoring, maintenance and integrity management; ignore or blame others for oil theft, spills and violence; pay bribes to government, military and police when necessary; and continue making huge profits as long as possible. And as the government is a majority owner of oil projects and relies on oil for most of its revenue, it habitually turns a blind-eye to the ongoing crisis.

While all operators, including ExxonMobil, Chevron, Total, ENI, and Agip, contribute to the problem, locals say that by far the worst actor is Shell. Asked why they don't clean up their mess or upgrade their infrastructure, Shell blames pushback from their Nigerian government partners, and security risks from militants. As for its hundreds of spills each year, Shell blames most on illegal oil theft ("bunkering") by local people, instead of the company's refusal to maintain or upgrade its dilapidated pipelines and facilities. Actually, much of the oil theft in the region is by the oil companies themselves underreporting production ("excess oil lifting"), to avoid paying royalties and taxes. Thus, "blood oil" keeps flowing, keeps spilling and the region continues to devolve into chaos and despair. 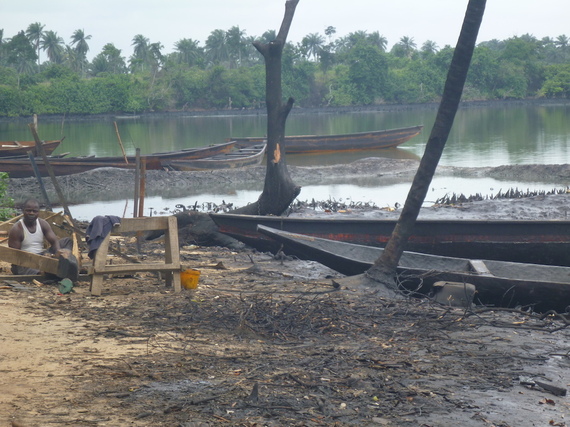 Today, people still see little hope of breaking this spiral of poverty, environmental destruction, and violence. The government, oil companies, and militants are simply making too much money from the current madness to want to fix the crisis. But clearly the region cannot stabilize and begin to recover until these intersecting issues are resolved.

Some villages have filed individual claims for oil damages in Nigerian courts, but none of these have been satisfactorily resolved. Others have recently sought justice in courts in the UK and the Netherlands. One landmark case against Shell in the UK courts, for massive spills in 2008 and 2009 from Shell's Trans Niger Pipeline, was settled last year for $80 million for 15,000 people whose lives have been ruined. While one of the largest spill settlements in Nigeria history, this still provided only $5,000 per person. Similar cases were filed in the UK courts just this month.

These cases are extremely helpful in placing liability where it belongs, but in context with the thousands of oil damage cases in need of resolution across the Delta, such an incremental approach could take decades. And even if local people win such cases, compensation is seldom sufficient, and effective oil cleanup and restoration never occur. To its credit, the Nigerian government is now organizing a $1 billion Ogoni Restoration Project, which is long overdue and welcomed, but the project will only address a small portion of the greater Delta ecosystem.

This slow, incremental approach will not solve the larger crisis, and local people can't afford to wait decades for justice and restoration. Until all claims and grievances across the entire region are equitably resolved, the oil infrastructure is upgraded to highest international standards, and the ecosystem is cleaned up and fully restored, there will likely be no peace or development in the Delta. Some in Nigeria are even proposing a complete cessation of oil extraction - a laudable, yet politically challenging goal at present.

Today, as Nigeria's "blood oil" crisis deepens, it is time to convene the U.N. Restoration Commission, and implement a comprehensive restoration initiative across the entire Delta, as follows:

1.Prevent future oil spills by requiring the industry to upgrade its oil infrastructure to international best available and safest technology standards. Substandard pipelines and drill facilities must be removed or replaced; waste dumping, gas flaring, and illegal bunkering must end. If a company cannot meet this standard, its permit to operate must be revoked.

3. Restore all ecological and socioeconomic systems injured by oil, including fisheries, hydrology, agriculture, freshwater, and other ecosystems.

4. Compensate the people of the Delta in a just manner for all injury caused by the oil industry.

5. Establish an equitable oil revenue sharing system for all people in the Delta.

6. Expedite judicial proceedings to hold those guilty of corruption or violence accountable, restoring the rule of law.

7. Enact improvements in governance and corporate behavior to secure future environmental and social integrity of the region.

Much of this is already required in Nigerian law, but has never been enforced. The Restoration Commission will need tens of billions of dollars, which should be paid by all oil companies in the Delta, in particular Shell and the Nigerian National Petroleum Company. Shell should immediately pay $10 billion into the Restoration Fund, with the understanding that more will be paid by other companies.

By comparison, BP will pay over $60 billion for its 2010 Deepwater Horizon spill in the U.S. Gulf of Mexico. Oil spill damage in the Niger Delta is even more severe and has persisted for decades, but Shell and other companies have paid only a small fraction of this amount in Nigeria. This is unjust, and must be remedied.

Also, Shell just wasted $7 billion drilling a dry offshore well in the Chukchi Sea off northern Alaska, and this money would have been better spent restoring damage the company has caused in Nigeria.

The oil companies have a legal and ethical responsibility to fix their mess, and they have the money to do so. It is now up to the Nigerian government and the U.N. to move this comprehensive restoration process forward. Hopefully, in 5 to 10 years, the Niger Delta can return to the vibrant ecosystem and sustainable, peaceful society it had been before oil was discovered there in 1956. That would indeed be an historic achievement.