On February 22, 2014, the United Nations Security Council did something that they haven't done since September 2013 on the Syria file: They agreed to come together and pass a resolution.

From a humanitarian standpoint, Resolution 2139 was a godsend. For the first time since the Syrian conflict erupted in March 2011, the Security Council voiced its collective stamp of disapproval in a strongly-worded resolution on the way the warring parties were conducting the fight. The wholesale slaughter of civilians, the indiscriminate bombing of civilian neighborhoods, the withholding of food and medicine from civilians who desperately need the supplies, the unnecessary bureaucratic obstacles on humanitarian relief agencies, the targeting of medical workers... all of this was spelled out in clear and unambiguous terms. The message from the Council was as obvious as it was resolute: The Syrian Government and the armed opposition need to stop blatantly flouting the Geneva Conventions, the laws of war, and international humanitarian law.

Two months after that resolution was passed with great fanfare in the human rights community, the situation on the ground has indeed changed. Unfortunately, it hasn't changed for the better. After speaking in a closed door session with the Security Council on April 30 on the implementation of Resolution 2139, UN High Commissioner for Humanitarian Affairs Valerie Amos commented to reporters that "[f]ar from getting better, the situation is getting worse." The Security Council, Amos added, needed to get its act together and start enforcing what it passed. "I told the Council that I am extremely concerned by the continued evidence of violations, by all parties, of the most fundamental provisions of human rights and humanitarian law."

The question, rightly, is what can the Security Council do about it? As long as Russia and China continue to oppose the adoption of a resolution under Chapter 7 of the UN Charter, there is very little the Council can, in fact, do to ensure that the millions of Syrians desperately suffering inside the country receive the aid that is required. Although Resolution 2139 put the Security Council on record, the absence of any punishment in the event of noncompliance virtually assured that the Assad regime and parts of the Syrian opposition would continue to violate the laws of war. 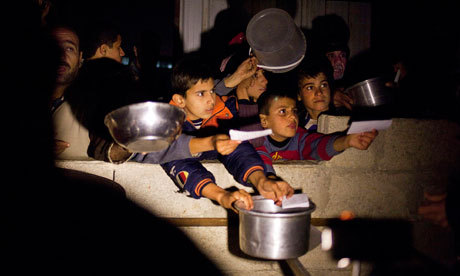 The United States, Great Britain, the "Friends of Syria," and the United Nations itself are now all grasping for alternatives. The most promising? Bypass the Assad regime directly and deliver aid across all of Syria's borders, regardless of whether the Syrian Government gives its permission.

At the conclusion of the latest Friends of Syria conference in London last week, Secretary of State John Kerry told reporters during a press conference that the United States was actively considering how the international community could make good on its humanitarian promises -- even if it ran afoul of the UN's sensitivity to the sovereignty of its member states.

"We are open to the idea of providing aid through any means that will get to the people who need it. And while the decision has not been categorically made, I'd just repeat: We are open to anything that will get the aid to the people, and we are very frustrated with the current process. It is not getting to people. It's going through one gate, one entryway, and it's going through Damascus and/or controlled by the Assad regime. That's unacceptable. We need to be able to get aid more directly and we're going to work to do that. That's a certainty."

Kerry is not the only one losing patience. The Friends of Syria joint communique issued after their latest meeting in London explicitly stated that the group would now consider more aggressive avenues to get the aid across Syria's borders, "irrespective of the consent of the regime."

Would this formulation be legal under international law? Well, it depends upon who is asked. More than 30 highly-respected lawyers and experts on international humanitarian law have given Kerry, the west, and NGO's who are ready to brave the risks of direct delivery a powerful legal justification for implementing a more activist aid policy. By purposely diverting and blocking humanitarian assistance, vital medication, and food staples for civilians under bombardment, these lawyers argue that the Assad regime has violated the core principles of the 4th Geneva Conventions. And, because the Syrian Government has illegally withheld consent for humanitarian delivery for illegitimate reasons, like weakening "the resistance of the enemy," the United Nations can lawfully cross Syria's borders without Damascus' permission.

Asked to comment on whether channeling food and assistance to NGO's and rebel groups outside of the Syrian Government's controls is a plausible option, Richard Gowan, an Associate Director at New York University's Center for International Cooperation, told me that it's a difficult proposition to carry out. In addition to the threats that personnel will face from delivering aid to civilians in the middle of a war zone, Gowan said that relying on NGO's and humanitarian organizations on the ground could backfire if not given proper protection. "Western powers need to be careful about channeling aid through NGOs and ad hoc organizations," Gowan told me. "Experiences from the Balkans to the eastern Congo show that warlords and militias can hijack aid very easily, and use it as a source of power. No aid effort is flawless, but there will be questions about which Syrian rebel groups will benefit from this extra assistance."

Whether the United Nations decides to send in humanitarian aid without the consent of the Syrian Government may ultimately be determined by the energy that Secretary-General Ban Ki-moon devotes to the issue. In his latest report to the Security Council on Resolution 2139, Ban harshly condemned all combatants in Syria for simply ignoring the Council's demands, but reserved his strongest feelings for the Assad regime. "The Government of Syria is failing in its responsibility to look after its own people," Ban wrote. "Meeting the Security Council's demand that all relevant border crossings be immediately opened for the passage of life saving assistance is not an abdication of sovereignty. On the contrary, it is an affirmation of the sovereign responsibility of the government to ensure... its citizens do not suffer in such a tragic and unnecessary way."

For the human rights community, this could be the start of a more rigorous effort to aid millions of Syrian's trapped in the fighting.