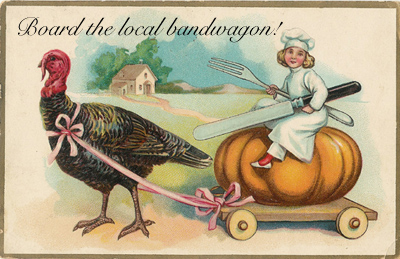 Even our most progressive presidents can be addled by Agribiz propaganda. President-elect Obama--thanks to his corn-fed constituents, we presume--is regrettably fond of ethanol, unlike his rival, John McCain. And McCain's not the only Republican who slams the grain-for-gas scam. Arch conservative P.J. O'Rourke airs his aggravation with industrial ag in the current Weekly Standard:

Agriculture is a business that has been up to its bib overalls in politics since the first Thanksgiving dinner kickback to the Indians for subsidizing Pilgrim maize production with fish head fertilizer grants. But never, since the Mayflower knocked the rock in Plymouth, has anything as putrid as the Farm, Nutrition and Bioenergy Act of 2008 been spread upon the land. Just the name says it. There are no farms left. Not like the one grampa grew up on.
A "farm" today means 100,000 chickens in a space the size of a Motel 6 shower stall. If we cared anything about "nutrition" we would--to judge by the mountainous, jiggling flab of Americans--stop growing all food immediately. And "bioenergy" is a fraud of John Edwards-marital-fidelity proportions. Taxpayer money composted to produce a fuel made of alcohol that is more expensive than oil, more polluting than oil, and almost as bad as oil with vermouth and an olive.

But Obama wouldn't be the first liberal leader to be conned by Con Agra & co. Jed Bartlet, that wildly popular--though sadly fictitious--West Wing populist, once called the Butterball hotline seeking expert advice on how to cook a salmonella-free stuffing, and gushed "I think this is a wonderful service you provide."

And maybe it is, but there are some not-so-wonderful aspects to Butterball's signature product, America's top selling turkey for more than forty years. In a concession to our obsession with big breasts, American turkey breeders created an avian abomination. As Barbara Kingsolver noted in Animal, Vegetable, Miracle:

Of the 400 million turkeys Americans consume each year, more than 99 percent of them are a single breed: the Broad-Breasted White, a quick-fattening monster bred specifically for the industrial-scale setting...If a Broad-Breasted White should escape slaughter, it likely wouldn't live to be a year old: they get so heavy, their legs collapse. In mature form they're incapable of flying, foraging, or mating...
...So how do we get more of them? Well you might ask. The sperm must be artificially extracted from live male turkeys
by a person
, a professional turkey sperm-wrangler if you will, and artificially introduced to the hens, and that is all I'm going to say about that.

Ah, but no such reluctance on the part of Peter Singer, professor of bioethics at Princeton and co-author of The Way We Eat: Why Our Food Choices Matter. Singer and his co-author Jim Mason actually got themselves hired to work for Butterball's artificial insemination crew in Carthage, Missouri, to experience first hand this foul method of poultry propagation.

Singer and Mason lasted exactly one day. Their description of what the job entailed, from extracting semen from the "toms" to working as "breakers"--i.e., grabbing panicked hens so the inseminator can inject them--is gruesome. A breaker has to wrestle with each hen to insert a tube, whereupon the inseminator releases a blast of compressed air, blowing the semen into the hen's oviduct. Singer and Mason describe this revolting ritual in fittingly coarse terms (sorry, Dad, but I'm just quoting an illustrious Princeton professor):

Routinely, methodically, the breakers and the inseminator did this over and over, bird by bird, 600 hens per hour, or ten a minute. Each breaker "breaks" five hens a minute, or one hen every 12 seconds. At this speed, the handling of birds has to be fast and rough. It was the hardest, fastest, dirtiest, most disgusting, worst-paid work we have ever done. For ten hours we grabbed and wrestled birds, jerking them upside down, facing their pushed-open assholes, dodging their spurting shit, while breathing air filled with dust and feathers stirred up by panicked birds.

On the bright side, this is one job that can't be outsourced to India. On the other hand, do you really want to make this miserably manufactured creature the centerpiece of your Thanksgiving feast?

But, you ask, what else is there, beside the ubiquitous Butterball?

Well, before the Broad-Breasted White came along and gobbled up the market, we relied on ordinary, normal-sized turkeys whose modest proportions enabled them to strut, fly, and, yes, engage in good old-fashioned turkey sex. These "Heritage" varieties were bred for flavor, not size, so while they're smaller, they're far tastier.

But, you say, that "Heritage" label sounds so hoity-toity. Surely, they're more expensive? And when so many of us are struggling with rising food costs, is it fair to urge folks to splurge on a fancy fowl?

Well, yes, it costs more to produce poultry in a sustainable and humane way. The small family farmers who raise these Heritage breeds don't benefit from the economies of scale enjoyed by the industrial turkey producers. You could argue--and many do--that factory farms are more efficient and give us cheaper food.

And sure, exploitation is more economical--just think of all the tax payer dollars we saved using slave labor to build The White House. Some things are just wrong. Factory farming abuses animals, workers, and the environment in the name of efficiency. It breeds disease, and depends on toxic pesticides and chemicals and hormones and antibiotics and genetically modified organisms--causing untold damage to our health, and that of the planet's.

That's why I'm asking you to please join the Thanksgiving Local and Organic Food Challenge co-sponsored by Consumers Union, the nonprofit publisher of Consumer Reports, and the Eat Well Guide, North America's premier free online directory for finding local, sustainable food (and for whom I sometimes consult, in the interests of full disclosure.)

As challenges go, this one is modest but meaningful. The Local and Organic Food Challenge simply asks you to include one dish--or even just one ingredient-- that's fresh, local, and sustainably grown, in your holiday feast. And by partnering with The Eat Well Guide, Consumers Union makes it supremely easy for you to participate. There's no need to embark on a marathon foraging expedition to hunt down organic cranberries or locally grown squash, because the Eat Well Guide's comprehensive online tool does the searching for you--you just have to do the gathering!

The Challenge invites you to share your locally-flavored recipes, and offers additional recipes and inspiration from legendary chefs Alice Waters, Mario Batali, and Dan Barber. Waters recommends that you "roast a delicious Heritage organic turkey. These birds are slow growing and spend a large part of their lives grazing and foraging which results in a deep and complex flavor. You will be supporting the poultry farmers who are raising special breeds, like Narragansett and Bourbon Red, in a sustainable way that cares for the land."

But what if you're on a budget, and you're not ready to bag the Butterball? Well, OK--you can still spring for some organic sweet potatoes, say, or whip up a sustainable stuffing with some Granny Smith apples from the farmers market, and maybe some locally milled cornmeal. As the Eat Well Guide's director, Destin Joy Layne, explains:

"The local food movement is about sustainability, broadly defined. This not only means consuming wholesome food that sustains our bodies and spirits, but supporting agricultural practices and distribution networks that sustain family farms and local economies-something that's especially important in these economically uncertain times. Consuming local food also helps to preserve the soil, air and clean water that support life on Earth-something we can all be thankful for!"

If only President Bartlet had known about the Eat Well Guide. Instead of putting in a call to Butterball, he could have flipped open his laptap, logged on to the Eat Well Guide, and punched in his area code to find dozens of stores in his own neck of the woods where he could find a free-range Heritage turkey raised the old-fashioned way. And then he might have said, "I think this is a wonderful service you provide! My fellow Americans, say buh-bye to the Broad-Breasted White and bonjour to the Bourbon Red." Now, there's a slogan for us sustainable socialist types--better off red than overbred.