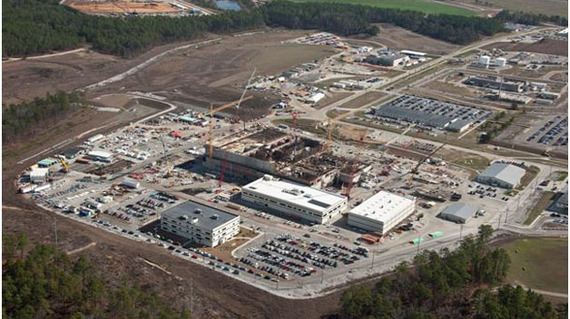 It sounded like a good idea back in 2000. Two decades after the Cold War ended, the United States and Russia each agreed to dispose of 34 metric tons of weapons-grade plutonium -- enough for about 20,000 warheads -- by combining most of it with uranium to create mixed-oxide (MOX) fuel for commercial nuclear reactors. Proponents boasted it was a modern-day fulfillment of the biblical call for nations to "beat their swords into plowshares and spears into pruning hooks."

Unfortunately, it didn't turn out to be that simple.

The bilateral agreement resulted in the MOX Fuel Fabrication Facility, now under construction at the Savannah River Site, a 310-acre federal nuclear reservation near Aiken, South Carolina, that employs more than 10,000 people. The facility was originally slated to be finished by 2016, but its completion date has been extended to 2025. Meanwhile, the program's projected "life cycle" cost, which includes construction, operation and decommissioning, has ballooned from an initial estimate of $1.6 billion to more than $30 billion. Why? According to the Government Accountability Office, because of the Department of Energy's (DOE) "record of inadequate management and oversight."

In 2013, the DOE acknowledged that the project's massive cost overruns and delays could make it "unaffordable," and last year the department planned to suspend construction while it studied alternatives. That didn't sit well with some members of South Carolina's congressional delegation, who were able to secure a line item in the spending bill Congress passed last month prohibiting the department from putting the MOX facility in "cold standby" and providing $345 million to continue construction through September.

Given the MOX project requires about $800 million annually, MOX boosters will be looking to squeeze more out of the upcoming federal budget. Even if they succeed, however, there's another major sticking point: There's no market for MOX fuel, which is far more expensive than conventional uranium fuel. U.S. reactors would require modifications and security upgrades to handle the fuel, and the program lost its only customer, Duke Energy, in late 2008. Since then, no other utility has signed up, despite the DOE's offer of generous subsidies.

There are security and safety drawbacks to the MOX program, too. "Converting this plutonium to a form that is harder to steal or reuse in nuclear weapons is a critical long-term goal," said Edwin Lyman, a physicist with the Union of Concerned Scientists. "But the MOX project actually increases near-term risks by making it easier for terrorists to steal plutonium during processing, transport or storage. And using plutonium-based fuel in nuclear reactors increases the risk of a serious accident."

While the Obama administration and South Carolina politicians wrestle over the fate of this risky boondoggle, Lyman recommended some common-sense alternatives in a report released today that draws on the detailed findings of a recently disclosed 2006 DOE study.

One alternative would resurrect an approach the DOE considered years ago to utilize existing facilities at Savannah River to "immobilize" the plutonium in hockey puck-sized ceramic discs and surround them with vitrified, highly radioactive waste -- waste converted into a glass form -- as a security barrier to theft. The discs would then be loaded into large metal canisters and moved to Savannah River's Defense Waste Processing Facility. The department stopped pursuing this promising approach, called "can-in-canister," in 2002 to focus exclusively on MOX.

"Immobilization had the potential to be faster and cheaper than MOX," Lyman explains in his report. "However, in order for immobilization to be a viable option today, the DOE would have to invest heavily in its development to make up for lost time."

An even less expensive, quicker option than immobilization, Lyman writes, is downblending, a method the DOE has already employed to dispose of several metric tons of plutonium. It involves diluting the plutonium with an inert, nonradioactive material. It then could be shipped to the Waste Isolation Pilot Plant (WIPP), a federal nuclear waste repository in New Mexico, when that facility reopens pending an investigation of a plutonium leak that occurred there in February 2014. Lyman's report identifies a number of downblending approaches that could be used to dispose of at least 34 metric tons of plutonium without requiring a change to the federal law that created WIPP. Provided that WIPP resumes operation soon, downblending is a far better approach than the MOX program to get a large amount of plutonium out of South Carolina, a major concern for the state's congressional delegation.

Last April, the DOE released a report that evaluated certain immobilization and downblending options as well as disposing of the plutonium in deep boreholes. Lyman found the department's conclusions wanting. It entertained only a couple of immobilization options, he said, and dismissed them as unworkable. Likewise, the department only considered a small subset of the potential options available for downblending.

The DOE is currently conducting a follow-on study to its April 2014 report. Lyman writes that it is imperative this time around for the department to explore the full range of options for immobilization and downblending, which he says "are the only technologies clearly capable of handling the bulk of the current and projected future inventories of excess plutonium."

Lyman acknowledges that none of the alternatives will be easy to implement, mainly because the DOE has relied solely on the MOX option. Further complicating matters is the fact that if the department chooses an alternative to producing MOX fuel, Russia will have to agree to amend the bilateral plutonium disposition accord.

Complicated or not, continuing the MOX program makes absolutely no sense. "Congress should allow the DOE to pull the plug on this misguided program," Lyman says, "before it squanders billions more and jeopardizes national security in the process."

Elliott Negin is a senior writer with the Union of Concerned Scientists.