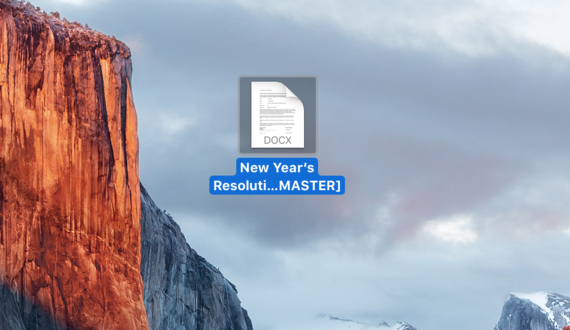 On my desktop lives a document entitled "New Year's Resolutions [MASTER]." This slew of yearly lists provides an interesting vantage point to view the person I've been trying to become over the years. In 2007, I was focused on psychological well-being through daily meditation and yoga, while 2011 was subsumed by vanity, with goals around weight-lifting, chugging egg shakes, and daily moisturizing. While I was struck by the significant shifts of what has mattered to me throughout the years (and that I've not yet reached enlightenment or held a quarter between my pecs), another common denominator arose. Over the years, nearly all of my goals have hinged on time-based performance metrics, evaluating my success based on how long I did something, not how well.

This likely isn't surprising. We use time-based metrics to guide nearly every aspect of our lives. Doctors tell us to exercise for 30 minutes and sleep for seven hours, employers expect us to stay in the office from 9 to 5 and work two years for the next promotion, and Malcolm Gladwell says we'll become masters after 10,000 hours of practice. But I'd argue that all of these metrics (and most of my goals listed in "New Year's Resolutions [MASTER]") do little to improve performance.

Take my goal of exercising for 30 minutes a day. How does this keep me accountable? Were those 30 minutes comprised of a vomit-inducing 6-mile sprint, or periodic butt clenches during an episode of "Game of Thrones"? This framework also pervades our education system, particularly through the use of the "credit hour": high schoolers must log 120 in-seat hours per class to graduate, and colleges dole out credits for the amount of time students sit in their seats. Do these hours spent in the classroom convey anything about actual learning that's taken place?

Numerous studies show that the amount of time practicing a task poorly correlates with performance. Instead, true gains require focused repetition independent of time on task (Ericsson, 1993; McDaniel et al; 1988). This is also observed in fitness gains: a recent study actually showed that one minute of arduous exercise is comparable to 45 minutes of gentler exercise, requiring a relentless focus on performance metrics (e.g. heart rate) rather than time (article). Apparently, even Six Minute Abs was overkill.

Somewhat paradoxically, our infatuation with time is also a threat to time well-spent. When time becomes an end rather than a means, our true goals - health, self-confidence, learning - fade into the background. When we lose focus on the quality of our performance within stretches of time, we permit ourselves to indulge baser instincts - to become distracted, multitask, and coast without intention. Simply, we're free to waste time.

Given these shortcomings, what makes time-based metrics so seductive? There seem to be two main culprits. The first is lazy measurement: it's difficult to develop and measure multiple goal types, and time is a common denominator easily applied with little planning or introspection. (Incidentally, the credit hour was preceded by a form of competency-based evaluation in the late 19th century, in which university admission involved oral and written exams. However, this system tragically proved too difficult to standardize and measure, so the simpler credit hour standard was born.)

The second culprit is lazy performance. Simply, time-based metrics rarely hold us accountable, which allows us to slack off during moments of practice. Unlike any other performance metric, time passes regardless of our level of intention, drive, or performance. This mindset allows us to coast, leading to a false sense of progress.

To remedy this overreliance on time as a marker of progress, let's embrace performance-based goal setting and mindful practice, shifting focus from how long we're doing something to what and how well we're doing it. Time can be an important ingredient in this process, but it must be contextualized to convey performance within a period of time. For example, instead of aiming for 30 minutes of exercise, aim for a target heart rate (perhaps sustained for a stretch of time) or number of burned calories; instead of practicing an instrument for an hour a day, practice until you master a new song or difficult passage; instead of celebrating a life by the number of years, consider how those years were spent.

And before you start your own "New Year's Resolutions [MASTER]" (and waste any time chasing time-based goals) ask yourself: what measurements actually matter?