Some foreign companies look at beloved American horses -- wild mustangs on the range, show horses, race horses, even work horses -- and see only two things: profit and food. They want to turn these majestic animals into frozen meat products for Europe and Asia, with no concerns about the unconscionable cost on life, health, the environment, or the integrity of our culture. 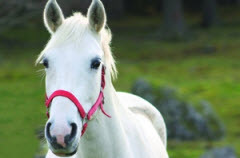 Fortunately, this industry was blocked from slaughtering horses in the U.S. when the president and Congress -- echoing the voices of a clear majority of Americans -- passed legislation late last week to prohibit the use of tax dollars to inspect U.S. horse slaughter facilities. This protection -- included in a major bipartisan budget package -- effectively reinstates a ban on domestic horse slaughter for the 2014 fiscal year.

Two aspects of that last line are worth calling out: "domestic" and "2014." These are significant because the regulation does not prohibit the transport of U.S. horses for slaughter to other countries, and because it must be re-approved every year.

Congress failed to include the language in the 2012 budget, opening the door for a return of horse slaughter in the U.S. Applications to open horse slaughter facilities were filed with the USDA in New Mexico, Missouri and Iowa and these plants came perilously close to opening.

The international transport loophole is equally disturbing. In 2006, two foreign-owned facilities in Texas and one in Illinois killed more than 90,000 horses for human consumption in countries like France, Belgium and Japan. In 2007, all three slaughterhouses for horses in the U.S. were closed, and several states have implemented laws banning the selling, giving and possessing of horse meat intended for human consumption.

But protecting our horses coast to coast in a lasting way requires passage of the Safeguard American Food Exports (SAFE) Act (S. 541/H.R. 1094), bipartisan legislation that would end the export of American horses for slaughter abroad, once and for all.

Americans are overwhelmingly on the side of the horses. In a national poll commissioned by the ASPCA, 80 percent of American voters expressed opposition to the slaughter of U.S. horses for human consumption.

Opposing horse slaughter on humanitarian grounds alone is a no-brainer. The majority of horses killed for human consumption are young, healthy animals who could go on to lead productive lives with loving owners. These equines suffer incredible abuse even before they arrive at the slaughterhouse. They're often transported for more than 24 hours at a time -- without food, water or rest -- in dangerously overcrowded trailers. Horses slip and fall and are often seriously injured or killed in transit.

Some erroneously liken horse slaughter to euthanasia, but make no mistake: Methods used to slaughter horses rarely result in quick, painless deaths. Horses are difficult to stun and may often remain conscious during their butchering and dismemberment.

Others argue that slaughtering horses in America is an acceptable alternative to shipping horses overseas for slaughter. They may be surprised to learn that even when there were active horse slaughter facilities in the U.S., tens of thousands of American horses were still exported to other countries for slaughter.

Consuming horse meat is actually very dangerous. Unlike pigs or chickens, horses are not raised for food in this country. Over their lifetimes, they're routinely given drugs and other substances -- both legal and illegal -- that can be toxic to humans if ingested. And few of these substances have been approved by the FDA for use in animals intended for human consumption.

A New York Times article revealed the hodgepodge of drugs regularly administered to American race horses, and resulting food safety threats. And the shocking discovery of horsemeat in beef products in the U.K. and other European countries certainly underscores the potential threat to American health if this grisly practice returns to the U.S.

Last year, more than 160,000 American horses were sent to cruel deaths by foreign industries that produce unsafe food for consumers. We should no longer be party to such cruelty. Horse slaughter is simply inhumane, whether here or abroad, and a lasting end to this vile practice is the only just solution.