This week, Oklahoma Governor Mary Fallin announced her intention to defy her state Supreme Court's decision to remove a Ten Commandments monument from the state capitol grounds. As she's following in the footsteps of Alabama Justice Roy Moore, Fallin may want to review the history. 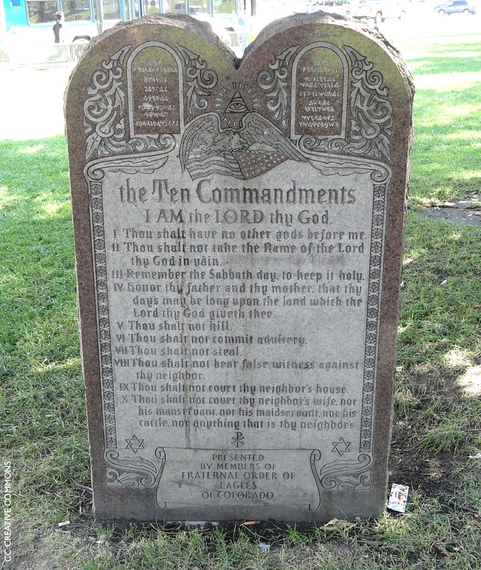 When Moore was first elected to be Alabama chief justice and a federal court ordered him to remove a Ten Commandments monument from his courthouse, he refused to abide by the court order. According to the Washington Post, he was subsequently removed from office, and the monument was taken away. Today, Moore is back in that position, using it again to impose his religious views, but this time in opposition to same-sex marriage. One doesn't need precognition to foresee how Moore's battle will end against the U.S. Supreme Court's order to issue marriage licenses to same-sex couples, and neither will Fallin succeed in her efforts to defy the law in order to engage in religious grandstanding.

Whereas Roy Moore admits his religious interest, Governor Fallin is misleadingly attempting to defend her position as a "tribute to historical events." And she's joined by Oklahoma Attorney General Pruitt, who similarly argues for the "historical impact of the Ten Commandments on the foundation of Western law." Nobody believes those who would go to the extreme of defying court orders in an effort to keep a Ten Commandments monument on public land are doing so with no religious agenda--even if it is a sham one in order to curry political favor. Fallin and Pruitt should feel embarrassed about making such an obviously phony argument.

Moore told a reporter for the Atlantic that he installed the Ten Commandments because he wanted "to establish the moral foundation of our law," and the latest crusaders say it's to recognize law or history. But with folks arguing it back and forth for so long, it's as if they forgot what their version of the Ten Commandments actually says. They may want to re-read it.

The Ten Commandments have little in them that refers to anything legal. Remember, four items focus on the importance of one religion's God, three more deal with coveting (but not actually taking) other people's stuff, and another is about being inactive on Sundays. This isn't and shouldn't be the foundation for any legal system.

The Ten Commandments are also not any modern person's best effort at a top ten list of rules for living. Religious or not, if they stop to think about it, most people would agree that there are far more important priorities today. Sure, forbidding murder and theft is a good idea -- though kind of obvious -- and as a parent I like the idea that my kids should honor me, or at least not rudely look at their phones in restaurants. But it wouldn't be hard to pick ten better, more universal, more relevant rules. For example, I helped to craft one alternative called the Ten Commitments that include useful recommendations like being a critical thinker, caring for the environment, acting on our concern for others, and seeking peace and social justice. I'd bet most people can do a better job writing such a list than the biblical version.

It's time religious and political crusaders wake up to the fact that the Ten Commandments were written in ancient times and as such reflect ancient values that are largely obsolete in the modern age. Beyond legal concerns about placing a religious monument on public grounds the Ten Commandments are simply outdated. They should be shelved for something better.