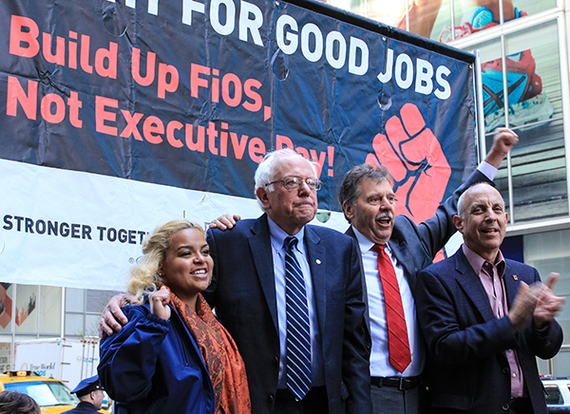 The biggest question for Bernie Sanders and his supporters is whether they'll transform his presidential campaign into a permanent organization that can carry his political revolution forward in the long-term; or whether, like Occupy Wall Street, it will quickly disappear.

If Bernie pulls off a triple bank shot, receives the Democratic nomination, and is elected president, such an organization will be needed to help him accomplish his ambitious goals. If a corporate centrist Democrat like Hillary Clinton becomes president, a mass national social democratic/socialist/liberal organization is needed to prevent her from moving to the right and to build a base for real progressive change. If a right-wing populist like Donald Trump becomes president, such an organization is needed even more to mobilize mass resistance to his potentially divisive and racist policies.

It's not just Mitch McConnell who needs to look out his window to see 1,000,000 mobilized citizens. If Hillary wins the presidency, she also needs to see the same, supporting her if she does the right thing and protesting her if she backslides into corporate centrism or initiates regime change wars. And if Donald Trump wins (don't kid yourself Democrats; it's possible Trump could defeat Clinton) we'll certainly need to be mobilizing, in the streets and elsewhere. In the meantime, we need to elect more candidates with Sanders-type politics at every level of government from city hall, to state-wide office, to the House and Senate.

There has rarely been a better opportunity to create and build a permanent, national progressive organization than has been afforded by the Sanders campaign. The historical moment is right, with Bernie winning millions of supporters' votes for his campaign against a rigged economic and political system, against institutional racism and a broken criminal justice system, and for aggressive action to combat climate change.

There's a campaign organization on the ground in virtually every state, innumerable cities and towns, and on college campuses that can contribute organizers and form the nucleus of a permanent organization. There are millions of dollars in small dollar campaign contributions, a few million of which could be diverted to organizing a permanent organization. And there are millions of supporters ready, even eager, to support the cause, not just for one election but for the future.

So here's a rough outline of the plan:

• The Sanders campaign announces that it will not end with the Democratic Convention or the general election, but win, lose, or draw, will continue on as a permanent mass organization.

• The Sanders campaign agrees to fund several million dollars from its war-chest in start-up costs for such an organization.

• The campaign assigns and/or hires several organizers from its national staff to coordinate the creation of such an organization.

• Simultaneously, it assigns organizers on the national, state, local, and campus level to devote all or part of their time to building such an organization.

• The campaign announces that it will make its email list available for communication with its supporters about the organization and, after the election campaign, to communicate and fundraise on its own.

• The first building block would be an organizing meeting to be held in Philadelphia parallel with the Democratic National Convention.

• In the (somewhat unlikely) event that Bernie is the Democratic nominee, the initial task of the organization will be to elect him president. If Hillary is the nominee, the initial task will be to critically support her and prevent Trump or a Republican from taking the White House. Whomever the Democratic nominee is, the organization would also campaign to take back the Senate and House and, in particular, to support progressive candidates. If it's Hillary, the organization would function semi-autonomously from her campaign and the Democratic Party, rallying Sanders supporters to block the Republicans. (In the 1964 Goldwater-LBJ campaign, civil rights and anti-war organizers -- who were wary of LBJ but determined to block Goldwater -- rallied under the slogan "Part of the Way With LBJ" in response to LBJ's campaign slogan of "All The Way with LBJ".) I suggest a slogan along the lines of "Partly Ready for Hillary".

• Between the end of the election and the Inauguration Day on January 20, 201, intensive work would be devoted to building a network of supporters and chapters in cities, towns, neighborhoods, workplaces and college campuses.

• Around Inauguration Day, a national convention would be held in Washington to formally create the organization, ratify a policy platform, elect a national steering committee, and set forth a list of initial organizing priorities.

The organization would be devoted to uniting people across racial, ethnic and gender lines. It would engage both in electoral work and in mass protest politics. It would run people for office at every level from dog catcher, to city council, to state legislatures to Congress -- mainly in the Democratic Party except where electoral law makes 3rd party campaigns practical. It would both endorse sympathetic candidates as well as run its own. At the same time, it would organize direct action on the ground for labor rights, civil rights, environmental causes, and against militarism and needless military action.

There are already several smaller organizations in place with similar goals, including the Working Families Party, National People's Action, Democracy for America, Progressive Democrats of America, Democratic Socialists of America; mostly online organizations like MoveOn and The Progressive Change Campaign Committee; and loosely organized activist groups of mostly young African Americans and Latinos like Black Lives Matters and the Dream Defenders. Many of their activists and members might be interested in becoming involved in a larger new organization building out of the Sanders campaign. But, with their own history of activism and organizing, it's unlikely most of these groups would want to dissolve themselves into a new organization, certainly not right away before it had proven itself. So the new organization would build coalitions with existing organizations.

Bernie is nothing if not a realist and a truth-teller. Committing resources now to building a permanent organization that would survive beyond the 2016 elections gives an additional raison d'etre for him taking his campaign all the way to the convention. The very rationale of his campaign is that change will occur not just by electing one person but by building a political revolution.

Committing resources during the campaign to start building a permanent organization would give substance to his call for a political revolution.

We're at an historical turning point: It may be years until there is again a mass mobilization of millions of potential supporters, tens of thousands of volunteers, hundreds of staff, millions of dollars in resources, and a YUGE email list.

Bernie and the Sanders campaign can seize the moment to start now using its massive resources to begin institutionalizing the political revolution he's calling for.

Which is it going to be?