UPDATE: 8:50 A.M. -- A spokesperson for Time Warner Cable says that service has largely been restored. "Most if not all should be back online now," Time Warner Cable's Bobby Amirshahi told The Huffington Post.

Time Warner Cable seems to be down nationwide, causing Internet outage throughout most of the country.

We're working to restore services to all areas as quickly as possible; no ETR. Tweets will be delayed while this is addressed.

TWC's website seems to show a spike in reported problems since the early morning hours: 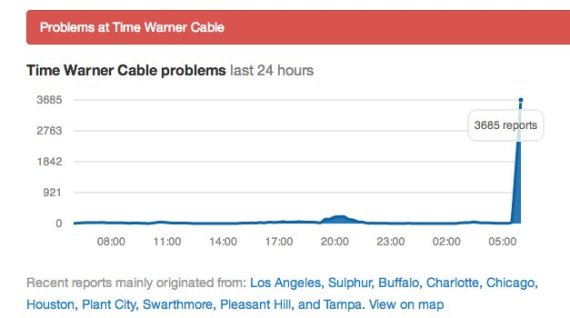 The hashtag #timewarnercable started quickly trending, as many took to Twitter to air their grievances, spread the news or poke fun at the company:

wait, @TWC is out and people are surprised? DOESN'T MAKE ANY SENSE WHATSOEVER.

This is how Planet of the Apes starts. #timewarnercable

Think we found the cause of the Time Warner cable outage pic.twitter.com/SizsprqIhW

@TWC you never fail to disappoint!

An updated outage map as of 7:25 a.m. EST shows TWC in some areas is still down, particularly in the northeast, while most of the country is back up:

Meanwhile, in an unfortunate case of a surely pre-scheduled tweet, the official TWC account promoted UFC 177 in the midst of its outage (and subsequent Internet outrage):

.@RenanBaraoUFC & @TJDillashaw battle it out this Saturday night in #UFC177. Watch it all LIVE on Pay-Per-View: http://t.co/gOZ9gc3PF2

Time Warner Cable said that the service disruption was due to a problem during network maintenance. Brian Stelter of CNN has tweeted TWC's statement regarding the outage, writing:

TWC statement: "At 430am ET this morning during our routine network maintenance, an issue with our Internet backbone created disruption..."

"w/ our Internet & On Demand services. As of 6am ET services were largely restored as updates continue to bring all customers back online."

This is a developing story, check back for updates.