Let's start with the first page, which begins with the instructions, "Let's start with an easy one: Are you a guy or a girl?" Wait, what? Do movies buffer differently for guys and girls? Do women need their tech advice given in a pretty pink font?! If you wait too long to select your gender -- because, you know, maybe that's a complicated issue for you that you don't feel like discussing with an animated tech tool -- the animated woman, wearing a pink shirt, naturally, cocks her hip and shimmies her shoulders a little. The dude, meanwhile, scratches his leg in a manly way (at least they stopped just short of ball-scratching). 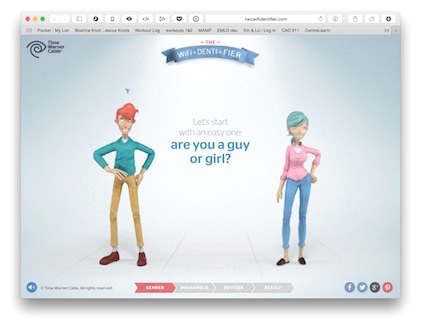 On the next page, you're asked who else shares your WiFi with you. If you click the "My Better Half" option, then TWCC immediately places a person of the opposite sex next to your gendered icon on the couch. The only other option is to select "a few roommates," as if it's still the fifties and you're still lying to your parents about who that gorgeous hunk is who shares your apartment and your answering machine. Apparently, people who choose to marry or even just cohabit with someone of the same sex don't use Time Warner Cable. (Actually, after discovering this, maybe they won't!) 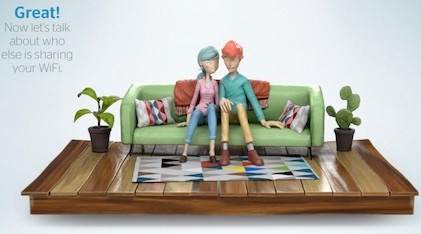 Oh, and we're guessing we don't even need to tell you that if you select the "Our (Big) Family" option, the animated nuclear family on screen is fully compliant with the Tea Party's "family values"... 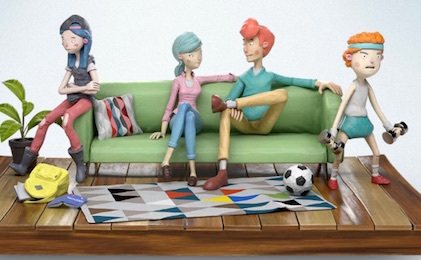 TWCC obviously invested an incredible amount of time and money into this tool, animating the characters, coming up with cheeky copy, etc. It's not like it was a single, unthinking line of text or code. And it's not like these are intentionally retro figures -- the women wear skinny jeans,  and the men have hipster facial hair, pompadours and tattoos. It's like Williamsburg or Silver Lake, except without any gay people.

We cannot believe that not a single person in the entire process spoke up and said, "Hey, remember that time when Ellen came out on Oprah's television show and said she was gay and oh yeah, that was 1997 and also probably a bunch of people were watching courtesy of Time Warner Cable?"

What's up with that, TWCC?