From: "The Book of Broken Promises: $400 Billion Broadband Scandal & Free the Net" 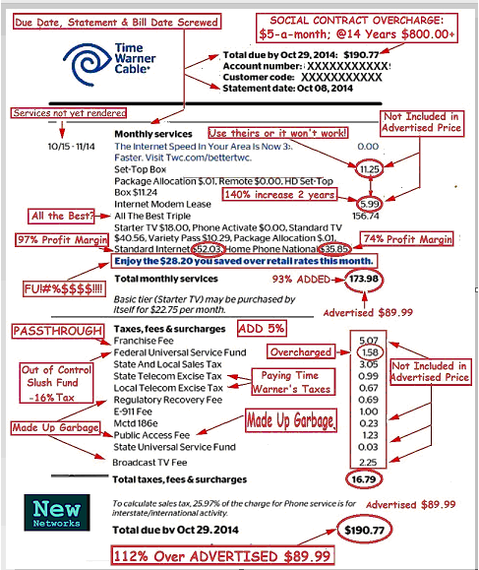 Fact is -- you can never, ever get the advertised price because it doesn't include many of the fixed costs, like the set top box, not to mention it is littered with pass-throughs of the company's taxes and fees, including the cable franchise fees. To add insult to injury, there are a bunch of garbage, made up charges, and let us not forget the increases on all services -- the 'Internet modem' fee went up 140 percent.

Not to mention I was overcharged as the Universal Service Fund calculation is wrong by $.07 -- not in my favor.

I know most of you reading this "feel my pain."

This bill is like going to a restaurant and ordering the $20.00 dinner 'special' only to get a bill of $38.68, not counting the allowable taxes. When you ask the wait-person about the extras, they respond -- Well, there is a "silverware rental" fee -- you could have brought your own utensils, right? A "garbage disposal fee"-- someone had to clean off your plates and take out the trash. And, of course, a "no smoking" fee, because if people could smoke in here, we'd make more money.

Why Are We Putting Up with This?

First, there should be immediate rate reductions on all services as Time Warner Cable, Comcast, et al, have a monopoly over the cable wire -- I can not simply go somewhere else with my business if I'm unsatisfied. There is no competition for fundamental services, such as 'cable service' or 'high-speed Internet', with a bundle to 'save money', except for, in my case, Verizon, who also uses the exact same, deceptive billing practices.

Because AT&T and Verizon never upgraded most of their territories for cable, over 50% don't have a second 'triple play' choice.

And don't think that the companies can't afford rate reductions. Time Warner Cable showed a 97% profit margin on 'high-speed Internet', as told by their own 2013 annual report - i.e., the company's internal costs to offer the service was $1.32 and they made $43.92 on average. In my case, the price is $52.03 (not counting the applicable taxes, fees and surcharges) and I have the standard, basic package.

Second, there should be an investigation of the Social Contract and the extra $800.00+ per household that may have been charged to customers. In 1995, the FCC allowed Time Warner (and Comcast) to add up to $5.00 a month to pay for network upgrades (like high speed Internet) and the wiring of schools. There is no proof that this additional charge was ever taken off the bill or that the schools were wired.

Third, every ridiculous, made up charge should be immediately removed. Period. These charges are part of the cost of doing business for the company. Period! Add them to the advertised price or remove them.

Fifth, clean up this deception. This is not a 'promotional price'; it is a deceptive practice that has been allowed to continue for too long. All "must pay to get service charges" should be part of the advertised price. This includes the set top box, which Time Warner's 'agreement' states that other boxes may not work with the Time Warner system.

Finally, the merger of Time Warner and Comcast...? You got to be kidding me! Allowing Time Warner Cable to merge with Comcast, where both have been rated as 'the most hated companies in America', is not in the Public Interest. This is just another version of this bill. Rotten to the core.

Let's examine some of the charges. I note that New Networks Institute & Teletruth's marked up Verizon local service bill is almost always in the Top 5 of any image search for the words 'phone bill'.

This Time Warner Cable bill is just more of the same.

How Do They Abuse Thee? Let Me Count the Ways:

"Features and Functionality May Differ. Our Services may operate differently depending on the equipment you use to receive them. For instance, if you choose not to lease a set-top box from us, you may be unable to view all available channels for the tier of Service you receive or to perform certain two-way operations."

Personal favorite:
"Enjoy the $28.20 you saved over retail rates this month.

I feel so much better.

CONCLUSION: The Emperor has no clothes. We've all been had. This is an abuse of all customers and it needs to end now.

In the next few weeks I will be writing more about this topic and what we can do to fix these problems.