In the previous article, I laid out excerpts of Time Warner Cable's SEC-filed 2013 Annual Report which detailed TWC's profit margin (revenues minus expenses) for High-speed Internet.

And we wrote about it because it is a big, bright red flag, especially considering that Time Warner Cable and Comcast have proposed a merger. In fact, we filed a Petition for Investigation & Complaint with the FCC (and NY Public Service Commission) to halt the proposed merger, and to start investigating a number of issues, including Time Warner Cable's High-speed Internet profits.

This is a flat reading of the data presented by Time Warner Cable. And in the previous article, we also mentioned that there are other common expenses, but these are not itemized or divided by lines of business.

There Are Some Who Think that This Is Not a Valid Analysis.

Here are a few comments from Huff Po and Reddit

"This is so wildly inaccurate. He has no idea what a profit margin actually is. He is confusing gross income (what he refers to as "profit") with operating income. Gross income does not include things like capital expenditures ($3.1 billion), interest ($1.6 billion), amortization ($126 million), or depreciation ($3.2 billion)."

"I like how you didn't include any of the operating costs. The salaries of the employees, the upkeep on their equipment, etc etc etc."

"This article goes to great lengths to "follow the numbers", but demonstrates no comprehension of basic book keeping principles like Fixed v. Variable costs, Gross v. Net Profits, etc. Or at least I hope it's a lack of comprehension. Or else it's willfully misleading.."

I'll come back to these comments in a moment.

But I note that others have also found that the cable companies have obscene profit margins on their Internet service. Two years ago, MIT Technology Review wrote: (February 4, 2013)

"In parts of the country, slower-speed copper, fast-download cable, and a few fiber networks are already built out. The cable distribution giants like Time Warner Cable and Comcast are already making a 97 percent margin on their "almost comically profitable" Internet services, according to Craig Moffet, an analyst at the Wall Street firm Bernstein Research. As Blair Levin points out, "If you are making that kind of margin, it's hard to improve it." And most Americans have no choice but to deal with their local cable company."

The Reason We Wrote the Article: Investigations before Any Merger

It isn't simply what appears to be obscene profits on one of the primary lines of business that triggered our interest. We included the information in a Petition for Investigation & Complaint with the FCC (and NY Public Service Commission) against Time Warner Cable and Comcast, to halt the proposed merger until some basic issues were investigated.

These profit numbers need to be examined in terms of the charges customers pay, as well as the lack of competition for primary services -- cable TV, and High-speed Internet broadband. As we documented:

We also called for an investigation of the "Social Contract" and its ties to the High-speed Internet profits.

To read about the other issues: Petition for Investigation & Complaint

The big disconnect for many of the commentors is that they believe that we need to examine the companies' company-wide, total capital expenditures, depreciation and all other financials to understand the High-speed Internet profits.

Unfortunately, using the total revenues, profits and expenses to determine the profitability of one of the lines of business, is like getting a copy of the US national budget and expecting it to reveal the financial secrets of the school lunch program -- or any detailed area the government funds.

Separate products and services have their own profitability and moreover, because of massive cross-subsidies (which we documented on the phone company side) the High-speed Internet service may only be paying 'incremental revenues', or not even paying for items like capital expenditures.

And I did write the book (s) on it, literally In 1993, New Networks Institute and Probe Research published the largest examination of the Bell phone companies' (now AT&T, Verizon and Centurylink) financials and business practices for their first decade (1984-1994). It included a report "Bell Earnings, Expenditures and Profits", among other research reports.

For the updated details see: "The Book of Broken Promises: $400 Billion Broadband Scandal & Free the Net"

Examining Separate Lines of Business Is the Norm: Incremental Revenues and Expenses

In the late 1980's-1990's, the phone companies started to add services known as "calling features", like "Call Waiting" or "Caller ID" (you can see the number of the person who is calling). While commonplace today, and free/included with most bundles of service or even wireless services, in the 1990's these were new services.

Calling features had a deep secret -- very high profit margins. And the phone companies claimed at this time that these services should be allowed to be charged at 'market prices', even though the company had a monopoly on phone service at this time.

Many states, in fact, deregulated these services allowing the companies to charge what they wanted and to keep any extra money, with the understanding that these extra profits would be used to maintain and upgrade the state utility networks.

In 1999, the Florida Public Service Commission did an analysis of profits above costs on "Calling Features", from 'Call Waiting to Caller ID', In 1999, Call Waiting cost $4.00 for residential customers per month, but had a profit over the cost to offer the service of 48,680% -- it cost less than a penny to offer. 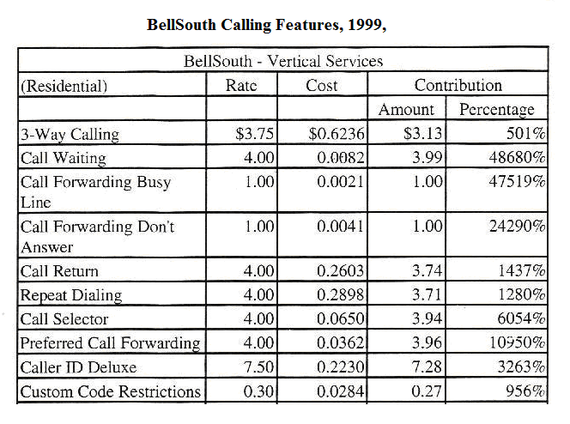 ("Report of the Florida Public Service Commission on the Relationships among the Costs and Charges Associated with Providing Basic Local Service, Intrastate Access and Other Service by the Local Exchange Companies in Compliance with Chapter 98-277, Section(2)1 Laws of Florida," February 19, 1999)

How could the services be so profitable? Incremental costs. These services were added to the network as part of the normal upgrades and maintenance as the new network switches were designed for these services, so the 'incremental' cost to offer these services was nominal.

Verizon: Who Paid for the Construction of the Fiber Optic Networks to Deliver the FiOS Service?

The reason why you simply can't use the 'total' financial information, even TWC's construction and depreciation, and apply it to the revenues and expenses of High-speed Internet is because the high speed service might not be paying for construction or taking depreciation as an expense.

In examining Verizon's financial accounting over the last five years, we uncovered that Verizon's entire fiber to the premises (FTTP) networks are being constructed as "Title II", common carriage to get the state-based utility rights-of-way as well as charge phone customers for 'massive deployment of fiber optics' -- I.e., Verizon New York's local phone customers paid for the construction of some, if not most of the costs of upgrading the networks.

(I note that Verizon has claimed that "Title II harms investments" and this issue is at the center of the Net Neutrality fights. We found Verizon failed to disclose these facts about Title II to the FCC, courts or public and we filed a Petition for Investigation against Verizon with the FCC over this.)

Based on the financials from Verizon New York (and filings with the NY Public Service Commission, etc.) the FiOS cable TV line of business did not pay for construction of the fiber networks, nor did the 'Internet-broadband-ISP' part of the business. It was paid for by the Title II voice/telephone part of the business. Moreover, the revenues from the FiOS cable service and ISP services appear to go into different financial corporate buckets, not back to fund the networks' upkeep.

I note that in July 2014, a petition was filed by Connect NY Coalition calling for an investigation of Verizon New York's financials and the rate-making process using data from our reports.

Thus, if we examine Verizon's total capital expenditures and the depreciation, etc., for just Verizon New York, we would not be able to answer what the FIOS TV or FiOS Internet expenses are.

But it gets worse when you attempt to examine the parent company, Verizon Communications' Inc.'s wireline holdings as that information combines multiple affiliate companies in multiple states and the numbers are not broken out by the same 'lines of business' as Time Warner Cable, so it is impossible to 'reengineer' what happened in the financials from the corporate annual or quarterly reports.

Thus, it would seem that with Time Warner Cable, the broadband and Internet 'service' essentially pays only incremental costs. The network infrastructure was already in place, the customer service staff is already in place for cable TV, and it would appear that the cable TV side of the business picked up most of the expenses.

That's one of the only ways that this High-speed Internet profit margin could show up.

But, in the case of TWC, while their own financials show the revenues and expenses for High-speed Internet -- TWC never discloses how the rest of the expenses they list relate to High-speed Internet. Time Warner Cable has over 100 subsidiaries and so, examining the total depreciation or capital expenditures doesn't get us the answer of what is going on specifically with the High-speed Internet service.

The 97% is a red flag that during a merger should be on the table to examine.

And I'll be the first to admit that there are fundamental questions that need answers before any merger is approved. We'd like to know:

I assume others have questions that the FCC, States and Congress should ask Time Warner Cable and Comcast before any merger is agreed to.