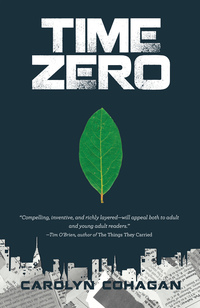 Mina Clark, the hero of Carolyn Cohagan's dystopian novel, Time Zero, must navigate life in a futuristic Manhattan that is isolated and tightly ruled by religious extremists. It's a world where girls are subject to restrictive dress codes and behaviors, aren't allowed to learn to read, must ask permission to speak to males, and have their marriages pre-arranged. Undeterred by consequences of her suffocating world, Mina seeks to change her life.

Unknown to the rest of Mina's family, her grandmother has secretly taught her to read - a act punishable by death. Having this knowledge leads Mina into a series of events that cause her to flee a pre-arranged marriage - lucrative as it may be to her and her family. Along the way, Mina has an accidental encounter with a boy, Juda, and together they rebel against society's rules.

"The religion that governs the Manhattan of Time Zero is fictional," Cohagan said, when we spoke about the inspiration for the novel, "yet I've taken its rules from various religions around the world, including those that originate in the United States. Each rule that Mina follows is governing the life of a girl somewhere in the world right now, including here in the US."

Cohagan began Time Zero in 2010 when she became increasingly disturbed by the news reports coming from Afghanistan about their treatment of women. She became frustrated by a hypocrisy in the US that discussed fundamentalism as if it were only a problem that existed outside our borders.

Cohagan set the novel in Manhattan because it is iconic and recognizable, but also to reinforce the notion that fundamentalism happens close by. "We have polygamous communities right here in the US," Cohagan said. "We have a real problem with child marriages that only need parental consent which is often parental coercion. There are women who aren't allowed to drive within the US."

Time Zero contains a list and the origin of the religious ruleshttp://www.timezerobook.com/#!religious-rules/zf0hv that govern the novel. She hopes if readers find other rules while reading the book, they will submit them to be included on her website.

Carolyn Cohagan started her career on stage. First as a stand-up comic performing one-woman shows and later turning her act into one woman shows. She took her theater experience to Los Angeles where she began writing screenplays. After making a few short films, she was working on a treatment for a new screenplay. Instead of stopping after the standard few pages, Cohagan kept writing. And writing. That's when she decided that she preferred prose to screenwriting and the never ending treatment became her first novel, The Lost Children.

After writing screenplays, Cohagan finds the act of writing novels liberating. "I feel like I'm making movies without a budget limitation without a producer giving me notes or telling me what I can and can not do. Writing novels streamlines the creative process and allows me to be the most creative the most amount of time. Writing fiction uses every part of my brain. I can't think of anything more satisfying or more challenging." 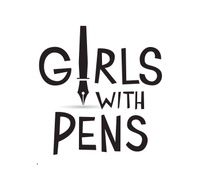 Cohagan recently founded a creative writing organization called, Girls With Pens that works to empower middle school girls through writing."I really wanted to give girls writing as a way to handle that difficult period in their lives. I know from my experience, and from women I talk to, how useful it would have been if someone had said, be weird, be outrageous, write strange things. Writing gives everyone a voice, an outlet."

Drawing from her own experience, she tells students that writing is like making movies on the biggest scale possible. You get to be the costume designer, the set designer, all the actors, and director.

Her advice to writers is simple. "Get your butt in the chair and write. As often as you can."

When we spoke, Cohagan was not sure if there will be one or two more books to follow Time Zero, but she promised that she would not drag out the ending.