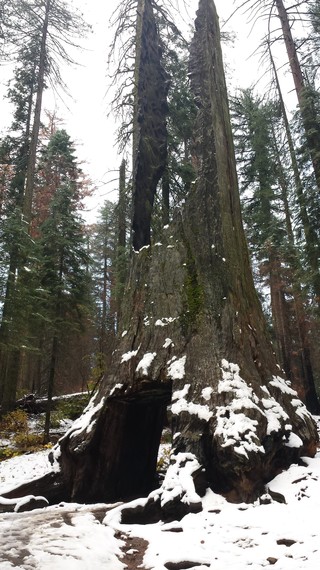 A little more than a week ago, I drove into Yosemite National Park for a week-long, California Master Naturalist immersion course. I was euphoric, about to sequester in beauty to study deeper levels of what Shakespeare called "nature's infinite book." Heading in from Oakdale, mile upon mile of mountainous hillside was covered in rusty brown dead trees. I was shocked at the blatant evidence for why Governor Jerry Brown had just declared a statewide dead tree emergency. In persistent human fashion I emotionally push off the effects of global change to some future date. But the moment has come. What we think of as Yosemite is in large measure already history.

About 20 people from all over the state joined me for instruction mostly by Pete Devine, the Resident Naturalist of the Yosemite Conservancy, a nonprofit that supports many vital park programs. Devine seemed to know every sparrow, jay, and scorpion personally, and to have at least passing acquaintance with a pair of peregrine falcons that one day seemed to scrape right by our eyeballs. We gathered for classroom-style learning and traipsed around many of the park's iconic locations. One of our party had never seen a giant sequoia -- it was fun to join him in gawking at the evidence of the very long view. Fellow nature nerds are fine company. On one lunch break, I sat balanced on a hillside among an intent group with binoculars stuck to our faces, silently watching as a pileated woodpecker proceeded to remove every last bit of bark from a halfway stripped tree. In addition to the sequoia, Yosemite's mixed conifer forest includes ponderosa pine, incense-cedar, and white fir, among other tree species, and that famous geology creates a variety of elevations further increasing habitat diversity. The resulting niches support nine species of woodpecker, more than any other national park. The black-backed woodpecker is adapted to meld in with smoky char after a fire.

We had a variety of guest lecturers during the week, including CalFire forester Len Nielson. "What's going to happen to all those dead trees?" we asked him, and he told us they would eventually fall down, or perhaps burn. Perversely, our historic tree mortality has as much to do with lack of heat as with too much of it. The California landscape evolved with lightning-strike fires, and Native Californians used fire to manage their food sources, both animal and vegetable. We have been suppressing fire and battling fire on the landscape for more than a hundred years, with the idea that it is a destructive force to contain. We have stopped a natural cycle from turning - for the moment.

The Ecological Importance of Mixed-Severity Fires: Nature's Phoenix explains it all to you. Edited by fire gurus Dominick DellaSala and Chad Hanson, the science papers gathered therein summarize what fire actually does, as opposed to what we assume it does. Destroy? Well, yes, for the moment. As DellaSala puts it in the preface, "most people view a burned area as a single event in time," right after their favorite trees have been torched. Fire is nature's great shape shifter, and it transforms one landscape into another. Even so-called megafires, which some will tell you burn too hot to do any good, actually reboot the ecosystem. They take out the old and make way for the new. Seeds that have lain dormant for decades find expression at last. Species adapted to what looks like a wasteland seem to magically appear and begin the transformation. We have wanted the pretty picture to stay the same. But the whole mechanism of the scene is built on change. (For a quicker take on the subject, check out DellaSala and Hanson's New York Times op-ed: "More Logging Won't Stop Wildfires.")

Len Nielson told us that the miles of rusty red dead trees would be replaced perhaps with another species in about 150 years. "The forest will continue," he said. "We just won't be here to see it." I felt heartened by this. It's one thing to look upon devastation and say "here is the end." It's another thing to understand the future is coming and it may actually be green. "We can co-exist with fire," Nielson said. The next day the gang of us sat down in a sunny vale for lunch. There came a gigantic crash: a dead tree, falling in the forest. And yes, it was heard.