Ten years ago, when I was reporting and writing my book, Perfect Madness: Motherhood in the Age of Anxiety, the idea that there could be policy solutions for the stress and worry and overwhelmedness weighing down on American families was considered, by most people I encountered, to be ludicrous. Women I interviewed would literally laugh in my face at the mere suggestion. "Do you want the government raising your children?" they'd snort.

Last year, 73 percent of Republicans, 87 percent of Independents, and 96 percent of Democrats said they thought it was important for Congress and the White House to devote attention to family-friendly policies.

Right now, two competing proposals for funding a national system of paid family leave have been introduced into the U.S. House and Senate. Four states -- California, New Jersey, Rhode Island, and Washington -- have passed paid family leave measures (though Washington State's has not yet been implemented, due to lack of funding).

Forty states plus the District of Columbia offer at least some publicly funded pre-K, and, after a number of years of steady decline in financing, many state budgets are stabilizing or increasing slightly.

Last month, a White House Summit on Working Families drew thousands to Washington, DC to rally for policies like paid leave and workplace flexibility. And last week, in New York, I rode the subway and saw public service announcements inviting parents to enroll their children in free pre-K . Other ads reminded New Yorkers that, starting July 30th, they were gaining the right to paid sick days.

The message couldn't be clearer: the "culture wars" of the end of the 20th century, which pitted working moms against stay-at-home moms and old-fashioned family values against the evils of modern-day homes, are over. Bashing working mothers -- blaming them for all the ills of contemporary family life -- was, perhaps, a viable political option in decades past, when Americans still weren't sure that the massive social changes of the decades we call "the sixties" were really such a good thing. But today, when 77 percent of mothers of children under the age of six work outside the home, and two-thirds of mothers overall are either the sole or co-breadwinner for their families, the old rhetorical sleight of hand -- which cleverly shifted the conversation from what we, collectively, might do to better families' lives to what women should have been and weren't doing -- is no longer admissible.

Our country has, at long last, matured into the ability to face, and even accept, today's changed social realities. But changed attitudes have not translated into changed policies. And families are paying the price. Nearly three-quarters of Americans now say that they, their neighbors, and their friends experience hardship in balancing work, family, and professional responsibilities at least somewhat often, and nearly 40 percent say that they experience such conflict "all the time" or "very often." In addition, a whopping 72 percent report that they and their families would be likely to suffer significant financial hardships if they had a serious illness or needed
to care for a new child or a family member who was ill.

Now it's time to take the next step -- to move from diagnosing the problem and wishing for solutions to putting realistic plans into action. We now have ample evidence from New Jersey and California -- the states that have had paid leave programs in effect the longest -- that paid family leave allows families to be more tightly bonded and healthier, keeps mothers in their jobs longer -- and doesn't impose an undue burden on employers. We'll soon have a natural experiments underway in Vermont and San Francisco that can show us how much of a difference a mere right to ask for flexible work arrangements, without fear of job loss or other retaliation, can make.

The notion that the interests of families and those of healthy businesses are in opposition is a false one. So too the belief that, as a nation, we can't afford policies that help families reconcile work and home life. These ideas should be discarded for good. Our lack of work-family policies has been a drag on our economy -- pushing women out of the workforce and turning us into laggards among other industrialized nations in our level of women's workforce participation. Just last year, the Congressional Budget Office, or CBO, predicted that the stall in women's workforce participation in the U.S. in recent decades has been significant enough to play a notable role in slowing down American economic growth over the next decade.

In the early 1970s, women who'd grown up and come of age at the height of the "Mad Men" era spoke of "click moments" when lives they'd long accepted as normal and natural seemed suddenly ridiculous, wrong -- and ripe for change. We need a similar moment of coming-into-awareness in America right now, one in which we see that the way we live our family lives -- with all the stress, and struggle, the rush and worry, the lack of time to bond and connect, and the near-complete lack of the sorts of support that exist in every other industrialized nation on earth -- is nothing less than outrageous.

The fact that a country as wealthy as ours cannot provide its children with decent early education and care is ludicrous. The fact that parents are at risk for losing their jobs if they take their children to the doctor is insane. The fact that young women - who now earn 60 percent of college degrees -- are beginning their lives burdened by the belief that,down the line, they'll have to choose between pursuing a career and having a family is tragic.

These troublesome facts are the result of policy choices, and they can be reversed by policy as well. We can bring those policies into being, but first we need, individually and collectively, to stop talking about women's "choices." Let's start calling upon everyone whose out-of-touch politics constrain the breadth of our horizons. Then, and only then, can we start to change the world for families together. 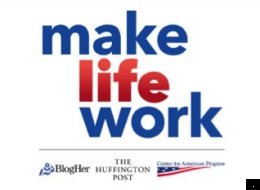 This post is part of the "Make Life Work" series, in partnership with BlogHer and Center for American Progress.

The Most And Least Affordable States For Child Care

Senior Fellow at the Center for American Progress