What makes a man a man? That's the question that the Times Of India posed to its male readers.

In the wake of a highly-publicized gang rape in which the 23-year-old female victim died from the injuries she sustained, the Indian newspaper printed an ad on January 22nd asking men to respect women -- as part of their manhood. "The true test of your manhood is how you treat a woman. All women. Any woman. Every woman," the quarter-page ad read. "If you do not respect a woman, you are only half a man." The ad also questions attributes and behaviors traditionally associated with being a man -- having a "six-pack, gelled hair and biceps," "rash driving" and being well-endowed. 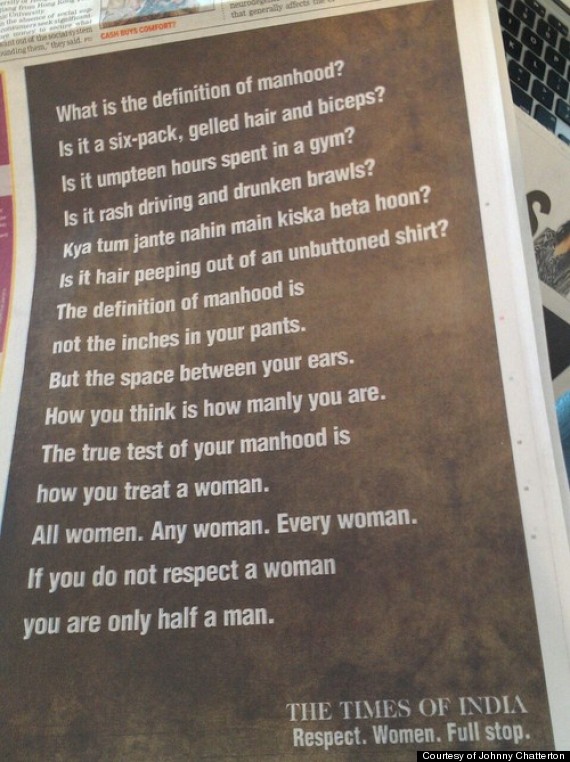 (Photo courtesy of Johnny Chatterton, who posted a shot of the ad on Our Mobile World.)

This isn't the first anti-violence against women campaign to target men. In December 2012, an ad campaign created by the police depatment in Edmonton, Alberta used the tagline "Don't be that guy," and a January 2012 campaign created by non-profit organization Men Can Stop Rape declared that "I'm the kind of guy who takes a stand. Where do you stand?"

The Frisky's Jessica Wakeman took issue with the fact that the Times of India ad still equates specific behavior (in this case positive behavior) with "valid" masculinity. "Just like sexist expectations of femininity can imprison women, sexist expectations can imprison men, too," she wrote. "I’m all for eradicating rape culture everywhere. But the answer isn’t to tell men to act like 'real men,' it’s to tell them to act like good human beings."

What do you think of the ad? Let us know in the comments!