In the New Orleans Times Picayune shrinking print debate, with Future of Journalism Gurus calling naysayers print fetishists and Saints owner Tom Benson asking for the TP's owners to find a way to keep printing the newspaper ever day, I visited with a newsprint connoisseur today. My mother-in-law, a lifelong New Orleans resident.

She let us dive into her clippings. Here's a page on new Saints owner, some guy named Tom Benson, and here's one of many pages on everything Dr. John (aka Mac Rebennack) has ever done.

She used to call us: "Dr. John made the paper. I'll save you a clipping." 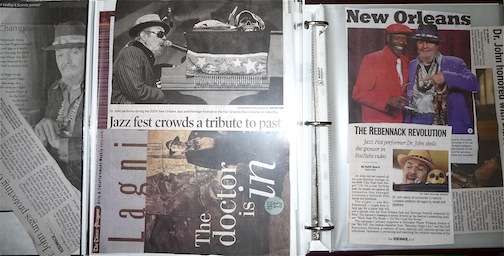 The senior center talk in the hallways has been that the paper doesn't shrink to three pages until October. Anyone who owns a monthly television schedule will become quite popular. The residents are perfecting their word-of-mouth chain for news, because once the paper loses four days out of the week you could be too late to catch the obituary and may miss your friend's funeral. Evacuation news will not be updated in print every day, and getting out of town is chaotic enough.

In October, there will be no newspaper out on Monday after the Sunday Saints game. She hopes Tom Benson buys the newspaper, and joked that Drew Brees, if he doesn't get signed, could stay limber by throwing our newspapers onto the front stoop. With his arm, it will land right where you want it. 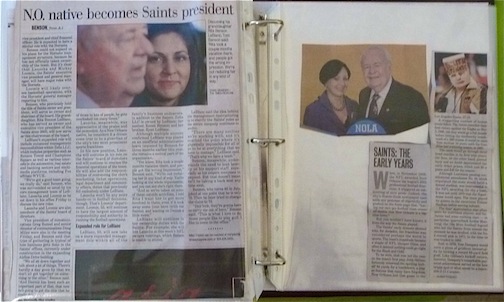 "They had a write-up today that there's plenty of news to fill a paper every day." My mother-in-law read that in the paper, probably a letter to the editor.

Overall, she and her friends have far more to focus on than the newspaper. They have survived more than one hurricane in their lifetimes. They have seen the birth of the telegraph, daguerreotype, radio star, vinyl record and network television. They have seen births, deaths, natural and man-made disasters. Don't bring up the NOLA digital smartphone option. These women do not consider a phone to be smart, and they certainly do not want to read it.

"Where's that clipping from the storm? It gave what happened every day. I know it's around here somewhere." That's referring to the Times-Picayune's award-winning post-Katrina coverage.

She's been collecting up her clippings to give us to take home. Doesn't really want them anymore.

The scrapbook we now have includes the New Orleans Beatles Day Proclamation below which isn't from the newspaper, but it's very cool. My husband won it in a radio contest as a 9th Ward teenager, along with a little square of Ringo Starr's bed sheet. The sheet square probably floated away in the post-Hurricane Katrina levee fail but the scrapbook is sitting right here on the coffee table, where it belongs. 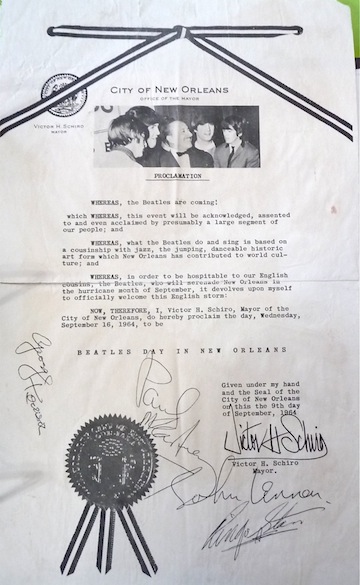