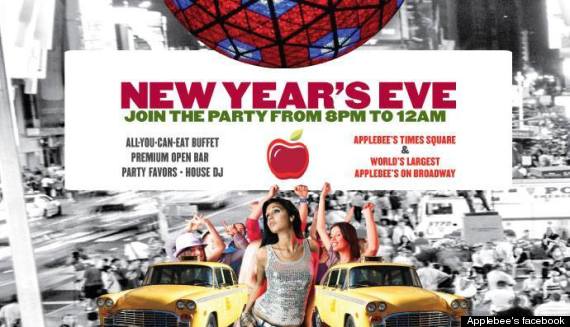 Some people avoid Times Square on New Year's Eve like the plague and some are willing to stand in the cold for up to 12 hours to get a piece of the action. One strategy to avoid the wait, and the potentially frosty elements, is to pay for a party package at one of the nearby restaurants or bars. It's a good option, if you don't mind getting horribly ripped off.

Restaurants like Applebee's, TGI Friday's and Guy Fieri's notorious Guy's Kitchen & Bar charge exorbitant amounts for dinner on New Year's Eve at their Times Square locations. If you're just focused on getting sloshed, a slew of bars and clubs are offering similarly steep packages.

Applebee's is charging $375 per person on Tuesday night for a party that runs from 8 p.m. to midnight. Dinner at Applebee's usually hovers around $20, franchise owner Zane Tankel told the New York Post. The $375 New Year's ticket includes a buffet dinner, a "premium" open bar, a DJ, live entertainment, party favors, a Champagne toast at midnight and a chance to watch the ball drop in person.

While guests will have access to the Times Square "lock-down zone," there's no guarantee they'll be able to see the ball drop when they leave the restaurant. Applebee's makes note of this on its website, warning that a view of the ball drop is "subject to NYPD approval."

If Applebee's sounds a little pricey, TGI Friday's party package is a mere $299. The night includes a "premium" open bar, passed hors d'oeuvres, a buffet dinner, a Champagne toast, coffee and dessert and a DJ. Unlike Applebee's, TGI Friday's isn't advertising its party as a launching point to possibly see the ball drop in person: "While you get your groove on inside, watch the famed Times Square ball drop just blocks away outside on Fridays' large-screen TV's. No need to brave the cold - stay inside and watch from the bar," the restaurant says.

Guy's Kitchen & Bar is offering party packages starting at $55 per person and going as high as $795 for a couple's VIP ticket. Like Friday's, the restaurant isn't touting its party as a spot to see the ball drop in person either. "Do your own countdown while the official countdown takes place right outside the walls of Guy's American Kitchen," the restaurant advertises.

Watching the ball drop on a TV and doing your own countdown sounds like something you could do for free, in the comfort of your own home. So why are these restaurants asking you to pay hundreds of dollars again? A private couples table package for $995 at Ripley's Believe It Or Not or $8,500 for a table for two at R Lounge must be worth the price tag... right?

Access to Times Square on New Year's is free, but these restaurants and bars can guarantee one thing to their customers that people crowding into Times Square for up to 12 hours can't get: a bathroom.