Timothy Robert Smith is a Los Angeles painter whose "Kaleidoscopic Realism" jumbles and disorients. His works have an air of visionary fiction -- rather like Piranesi's prison fantasies or Tintoretto's religious paintings -- that offers a dazzing antidote to what Smith calls the "tunnel vision" of civilization's dominant linearity.

I recently interviewed Smith and asked him about his themes, his ideas and his background. 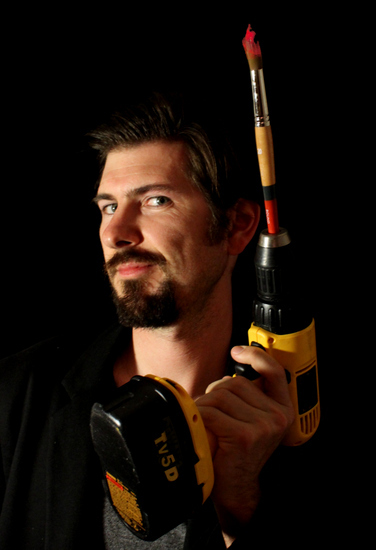 What are the some of the themes and ideas present in your work?

Some of the themes include:

Modern physics and the nature of reality: this includes time and space, hidden/alternate dimensions, and probable selves. I'm trying to show a cinematic picture of the universe based on these ideas.

I'm also interested in radical/intuitive/mystical/primitive science and the fine line that exists between what is/isn't considered "scientific": for example Nikola Tesla and his "psychic powers." Also, how our accepted ideas of physical reality are always in flux (see Steven Hawking's The Grand Design).

Consciousness: belief systems and how they alter the nature of reality, The role of "the self" in our technological-based consumer society ("Technocracy"). The struggle to survive, the fine line between sanity and insanity... Who are we really?

The theory that everyone is really their own opposite: we are beautiful Contradictions, acting out roles in a theatre of the absurd.

Finding peace within a civilization: empowerment through enlightenment.

Enlightenment: that undefinable sense of knowing. My work operates like a Zen koan, throwing around paradoxical visual ideas designed to force a temporary glitch in our auto-pilot systems of consciousness. 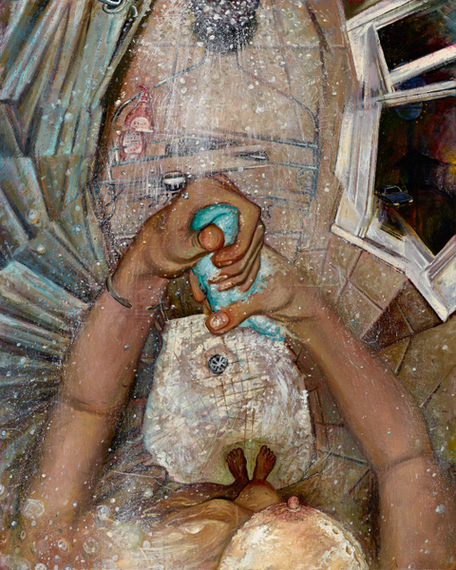 What kinds of images are you interested in creating? 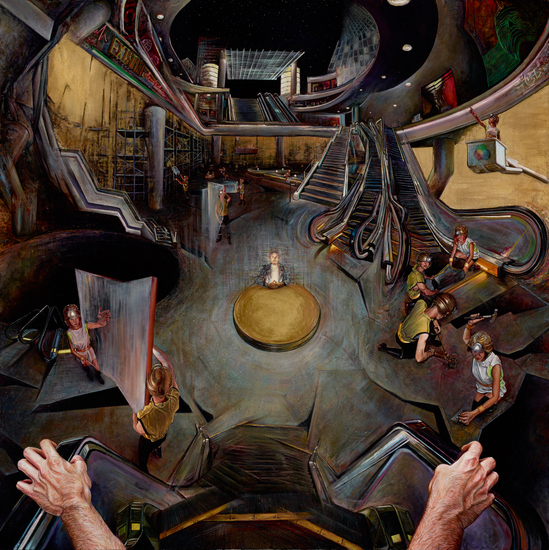 What will my readers find most interesting about you?

- I toured Europe in a punk band when I was 18 (The Fixtures). We mostly played in Germany where there was a huge squatter anarchist movement.

- I almost majored in film at CSULA -- only had a few credits to go -- but I switched my major to art to keep getting free student aid money. and because I only wanted to make experimental art films anyway, which did not go over so well with.. anybody.

- I lived in and helped run an underground experimental music club in downtown LA out of a warehouse. Eventually it was shut down by the fire department.

- I lived in a Silverlake Co-Op with 12 people, three cats, five chickens, and a garden. I built a padded room within a room in the basement to act as a sound-proof isolation chamber around my bed, called the "Space Pod." But the kitchen traffic was high volume and it didn't work too well.

- Then, I felt a "calling" to go on a three-month cross country motorcycle trip on an '86 Honda NightHawk 450 with nothing but a sleeping bag. I slept outside for most of the trip, unless I passed through a state where I had a friend.

- I play Banjo like a sitar to make psychedelic bluegrass music. 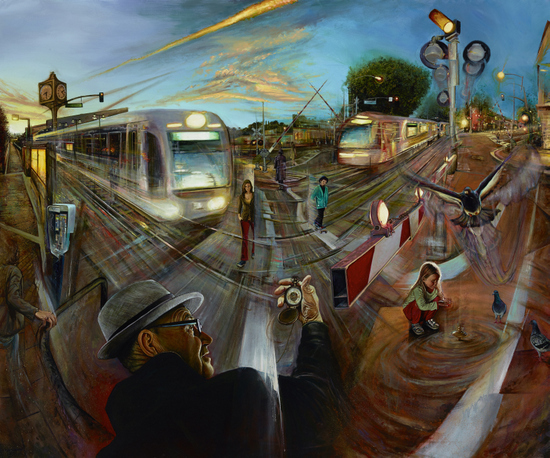 Are there some technical things we should talk about, for example, your use of perspective?

Perspective is a main component, both of the artist's experience of the work and of the viewer's.

My painting process is something I develop as I go; an intuitive map, sometimes unknown to my consciousness. I mostly feel what I am trying to say, but I can't quite think or imagine it until it becomes real. Every finished painting is a surprise revelation to me.

Can you walk me through two or three of your recent paintings and tell me what you hope they have to say? 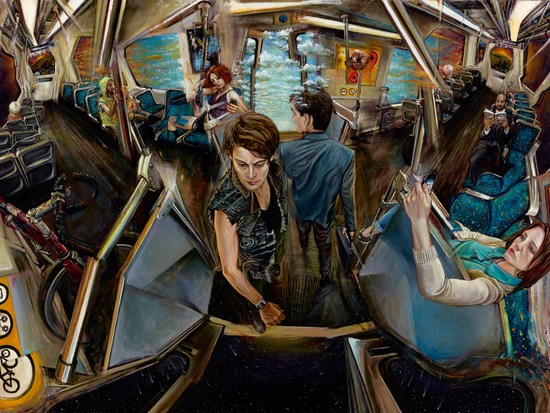 My latest piece, "Probability Feedback Loop," is about alternate dimensions and the interconnection of opposites. All of the people are painted twice as two probable versions of themselves; an idea coming from my interest in theoretical physics and abnormal psychology. I found models who could transform their identity through facial expressions and attire. The centerpiece character is a good friend and amazing artist, Joe Holliday, whom I've known for years. We both come from a similar hardcore punk background; involving lots of secret backyard shows and urban exploration.

The two Joe's -- hardcore Joe and business man Joe -- bump shoulders while crossing paths into each other's worlds. Another character is a man who, in one reality, is a schizophrenic homeless man; and, in another, is a professor reading a book about the (schizophrenic) nature of reality, simply titled "REALITY."

If you look carefully, the "R" appears backwards on the back cover, suggesting that reality can be read forwards and backwards. Other clues include the destination signs on each side of the train that together read "Holographic Multiverse," and the ad poster that shows a hand pressing "Pause" on a remote control. The ad background has two Google Maps destination markers, one right side up and one upside down. 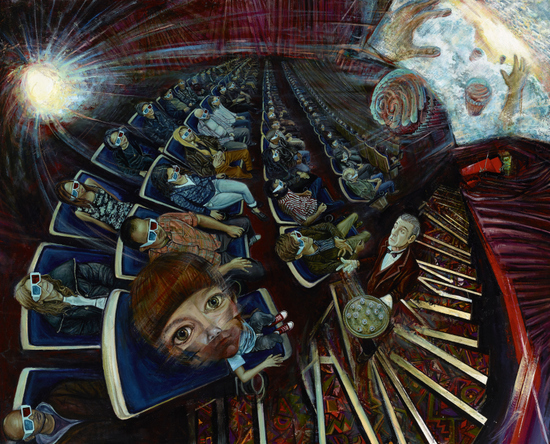 The main concept behind "Reality Theater" comes from Plato's Allegory of the Cave, in which cave-dwellers believe that the shadows projected on the wall are Reality. In my allegory, 3-D movie patrons -- being served little orange pills -- believe the hands projected on the screen are actually their hands. The imagery is inspired by the cover of The Society of the Spectacle, by French situationist Guy Debord.

Before I read the book, I imagined it was about reality being is a mass hallucination, or spectacle, that we collectively experience through constant exposure to stimuli. Debord's "Spectacle" is less about the nature of reality itself and more focused on human systems within it -- commodity and colonization -- but I get what I like from it. To me, his most radical statement is "All that once was directly lived has become mere representation," which is more relevant today than ever given our fascination with iPhone apps and social media.

Also in that piece is a reference to a page in Be Here Now by Ram Das, about our addiction to temporary satisfaction, which is represented by melting ice cream cones. He explains that we keep eating and eating, constantly in search of the eternal "big ice cream cone in the sky," which is clearly unobtainable. His point is to abandon craving and desire; and fully accept what is here and now. 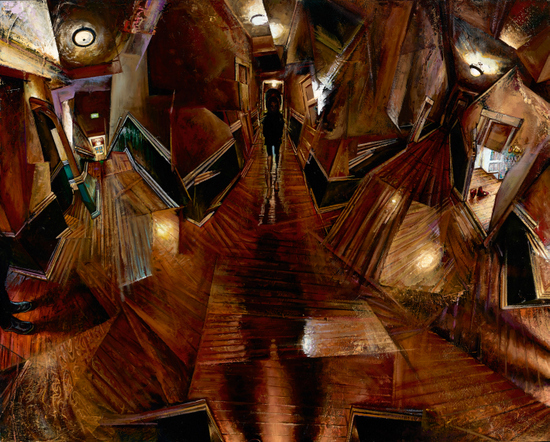 
How would you describe your working process? Your paintings seem to involve a great deal of schematizing and planning.

Locations, strangers, and spontaneous events inspire me. I develop ideas and images as I go, constantly switching between thinking, sketching, photography and painting. I like to consider every possible angle and physical/psychological viewpoint. For "Reality Theater" I posted on Facebook looking for volunteers who were down to come to my studio to be photographed. It was great and really helped me capture the randomness of people sitting in a theater. My mom wanted to be in it, and you can see her there behind the crazy-eyed kid, who is based on old photos of me.

"Probability Feedback Loop" was more carefully planned out, but all of the characters are based on exaggerated versions of people I see on the train. "In the Event of All Things to Be and Have Been Being Now" is a Metro stop in South Pasadena, but the pigeons are from downtown LA. 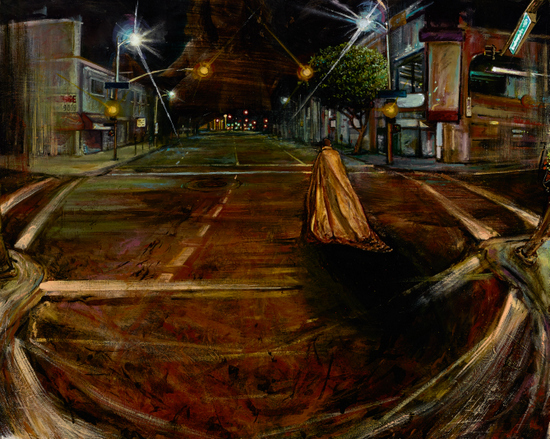 "Kaleidoscopic Convergence" is my apartment hallways at night and "Marginal Prophet" is from a photo I took outside my painting studio. It's all experience and life. 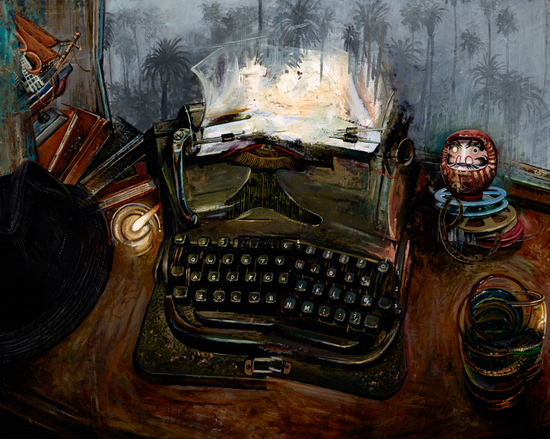 Note: This piece will contain custom lettering on the typewriter paper of a message significant to the owner, which will become the title. Upon acquiring the piece, the owner must determine a goal to be achieved in this life. When the goal is accomplished, the second eye of the Daruma doll will be colored in, or "opened".

Note: T. R. Smith will also have work on view in "Melancholy Menagerie: A Gaze into the World of Big Eyes" at the Fullerton Museum, opening May 3.