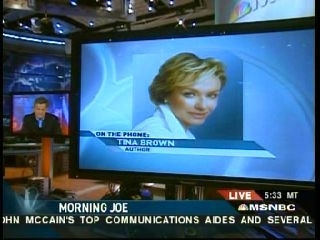 Okay, homestretch in the glacially-slow moving yet inevitable sale of the Wall Street Journal to Rupert Murdoch: The offer's been made, the deal's been accepted, and Richard Zannino is already counting out his $25 million golden parachute. Now, it all comes down to the Bancrofts.

Whom everybody hates right now, by the way. Said Tina Brown on Morning Joe Tuedsay morn: "The fact is, they're cashing out, and they should just get on with it if that's what they're going to do." (Remember who came back to the table first?). On HuffPo yesterday, Matt Cooper had this to say: "Hey Bancrofts, Shut Up." Said Cooper: "The various deals to retain editorial control through promises and pledges, boards of graybeards and watchdog committees seem pathetic, really. It's the roilings of a genteel poor family needing to sell its beloved estate to the parvenus* but not wanting to allow the unwashed to decorate their homestead... If you're so outraged by Murdoch, then don't sell." Yes! And that's exactly what they're going to do! Or not do! After they take a week to think about it! Sigh.

(Actually, technically they've had since April to think about it, but whatever.)

E&P's Joe Strupp waxes cinematic here, reproaching the Bancrofts for failing to shoot Moe Green in the eye, or something: "But if Don Corleone ran the Bancroft family, chances are none of this hesitation would prevail. He would gather together the offspring and tell them why, or why not, selling to Murdoch is the way to go. The decision would be made. Cheeks kissed. Fade to black." Except that the Bancrofts are on the receiving end of the un-refusable offer, which makes them more like Jack Woltz waking up next to the bloody head of Khartoum. Not a metaphor the beleagured WSJ staffers like much, probably.

So: At this point it's just marking time — for a change — while everyone wrings their hands and the Bancrofts figure out how to fit Rupe's fig leaf over the family jewels, to paraphrase James Ottaway. We'll leave you with that image, and with the one of Brown above, which is sort of reminiscent of Hillary Clinton in the Hillary1984 video, no? P.S. We looked for the transcript and/or video of Brown on "Morning Joe" to bring you, just because she was so very excellent and authoritative-sounding in her crisp British accent, and you could tell that Joe was impressed, but alas, there was no such transcript or video to be found (just her talking about Diana, which, well, we've heard already). After she was off, Mika Brzezinski said, "she's one smart lady," and they all agreed that, yes, she was one smart lady. Which must be why everyone seems to agree with her about the Bancrofts cashing their check and shutting up already. Fin.

For Bancrofts, Decision Time Is Near on Sale of Dow Jones [WSJ]
Murdoch's Arrival Worries Journal Employees [NYT]
To "B" or Not to "B" [CFO Blog]
Hey, Bancrofts: Shut Up [HuffPo]

*Parvenus? They don't even know us!