Tinder, a dating app for the iPhone, has become so wildly popular in the six months since its launch that it’s already spawned its own malady: Tinderitis, or the sensation of having a sore thumb from swiping to approve or reject the faces of people offered up as potential date material.

Tinder has lured people in by unabashedly offering a place to do all the things we love doing online, but won’t admit to: act shallow, make snap-judgments based on looks, obsess over what people think of us and boost our egos. It’s turned passing judgment into a pastime, and people are thrilled to take part.

“People don’t think of [Tinder] as online dating, they think of it as a game,” said Rachel Ellicott, a sophomore at Cornell University who downloaded the app earlier this winter after hearing about it from friends at other schools. “I think of it as a beauty contest plus messaging.”

Tinder, which first launched at a University of Southern California party and expanded to other college campuses from there, is part HotOrNot.com -- a site that lets people rate strangers’ appearance -- and part “f*ck, chuck, marry” -- the high-school sleepover game that makes players pick which they’d do to three people. After signing in with Facebook, Tinder users are shown singles nearby, then asked to “like” or say “nope” to a potential match based on a few postage stamp-sized photos and some scant details about mutual interests and friends. Only if two people both “like” each other are they allowed to message, reducing the barrage of messages women often receive on other online dating services.

Though Tinder co-founder Justin Mateen declined to specify how many active users the app has attracted, he said the iPhone app is currently being downloaded 10,000 to 20,000 times a day. Sixty percent of users check it daily, with many consulting the app five to six times a day, Mateen added. 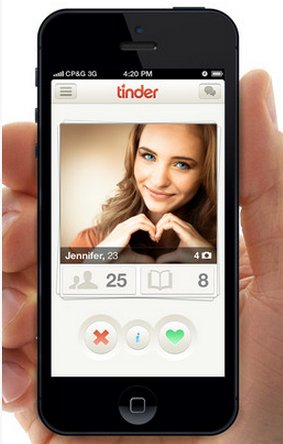 The secret to Tinder’s success is a small circle that appears below each photo: The “X” button. In a social media world rampant with “likes,” “hearts,” “favorites” and “thumbs ups” designed to ensure everyone gets along, Tinder actually encourages people to pass judgment in a superficial way. That, however unkind it may seem, holds real allure. In some ways, it's even refreshing.

Judging on Tinder is “mostly based on looks,” acknowledged Nikki Blank, a Tufts University sophomore who’s helped Tinder with its outreach on campus. “I think it’s definitely part of the appeal, though. And it’s socially acceptable under the guidelines of [the app’s] rules.”

Tinder is like The Facebook before it became Facebook: a pure, unadulterated means of dissecting people’s physical appearances, with no extra details about recent articles read or apps used to slow down the judging process. Tinder makes the scrutiny even more streamlined than on Facebook and doesn't try to disguise it -- making the app wildly popular and intoxicatingly enjoyable.

This online dating app is really a judging app, and Tinderers have responded to the app’s rules by rating each other over 3 billion times in six months. The app's creators have cleverly designed Tinder to make rating both faster and, in a subtle way, more literal. Instead of tapping a big red “X” to pass over someone, Tinderers can flick the photo aside, as if the person has been summarily dismissed, banished with a wave of the hand.

All that mutual rating, those billions of taps and flicks, has allowed Tinder to tap into the Holy Grail of what people seek to know about the world: who’s attracted to them among the subset of people they’re attracted to.

The startup has used technology to uncover and help us communicate our attraction to each other, information that because of our egos, social norms and general inter-personal awkwardness, we’ve almost always kept locked up. Tinder offers the digital equivalent of stepping into a party and immediately knowing which of the people you find attractive think you’re good looking, too. It’s as if singles suddenly had mind-reading super-powers.

Being rated, for many of its users, actually seems to feel good. Instead of receiving lascivious compliments from faceless strangers sent to OKCupid inboxes or via Facebook Messages, Tinderers get to learn if people they find cute like them back. At the same time, there's little fear of suffering the sting of rejection. Because Tinder appears to show people at random, there’s the plausible excuse that if a handsome stranger hasn’t liked you back, it’s simply because he hasn’t come across your photo.

"It’s become an ego boost,” said Ellicott. "I downloaded it just to appease my guy friend, but ended up getting addicted to it because it’s like, 'Oh, a cute guy in my class likes me back!'"

Blank agrees, noting her peers have used Tinder "more as an ego boost-type situation than a dating situation or a way to connect with people."

Tinder's rapid rise has worried some, who argue it feeds our shallow inclinations.

"It grants permission for those in our culture to rate others based on physical appearance, and furthermore, it teaches us how to slash an 'X' on those we find unattractive (too old, too short, too much facial hair)," lamented Carlina Duan, a contributor to the University of Michigan's Michigan Daily student newspaper, in a story about Tinder. “It teaches us that dating, then, is a process of physical attraction and only physical attraction."

It's a fair criticism. But it may actually be the "likes," not the "X's," that offer more cause for concern.

Tinder is telling people things they wouldn’t have learned otherwise, and wouldn't have learned offline. It reveals the Ryan Gosling-lookalike down the street thinks you’re hot, the cute girl in Starbucks likes you back or that the guy you’ve checked out in class has eyed you back.

That deeply personal, useful and instantly gratifying information makes Tinder an addictive experience, with each match fueling a kind of emotional high. Research has shown “likes” on Facebook and retweets and Twitter can release a dopamine surge that, in some cases, lead to social media addiction. Now imagine the chemical effect of immediate e-feedback that's even more personal: While Facebook tells you if someone liked your status update, Tinder tells you if someone likes you. How soon will it be before people go from enjoying that feeling to craving it?

Tinder’s popularity both underscores and feeds an obsession with constant acknowledgment and approval. It suggests we're all but starving for likes, eager for affirmation, and will no doubt be suffering even more acute Tinderitis in our push to figure out which strangers, and how many, think we're hot.