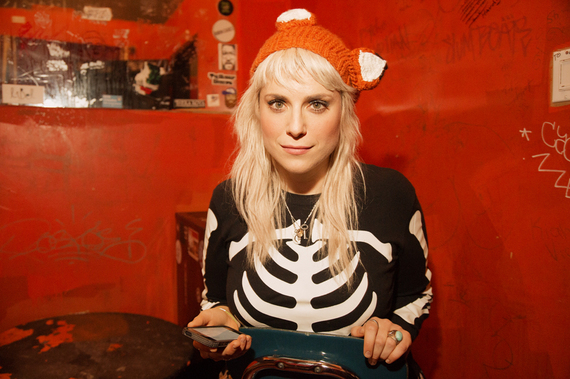 Whiskies in hand, my girlfriend and I make our way down the long, winding line to the basement of Union Hall in Brooklyn. It's a packed house for a sold-out Tinder Live! show, a monthly comedy show hosted by comedian and writer Lane Moore.

If you've been single any time during the past three years, you know how awful Tinder can be. It's full of self-obsessed American Psycho types who look like they want to make cufflinks out of your incisors, or worse, boring people who can't hold a conversation and don't have anything even remotely serial killer-y about them.

Miraculously, I met my girlfriend on Tinder, and so far she has not tried to make dream catchers out of my skin. We've referred to this as "hitting the Tinder jackpot." When Moore asked me to attend Tinder Live!, I couldn't resist. A comedy show dedicated to making fun of the awkward mess that is Tinder? Yes, please.

As soon as Moore takes the stage she announces that during the show, she'd be swiping through profiles on Tinder, "where sadness goes to fuck," and letting the audience choose whether she swipes right or left. She then introduces the panel for the night, a mix of comedians and writers who make comments on each profile, and warns everyone that she'll have to sleep with the people we choose, and to please be kind. "That 'joke' is completely serious," Moore says. "It's very time consuming."

At the beginning of the show, Moore goes through the "Picks Of The Week," a collection of profiles that are too ridiculous and awful not to share, including one guy whose profile reads: "I'm drunk too, but your drunk photos make you look like shit."

Moore started Tinder Live! two years ago because she wanted to "create an environment that could take this isolating, depressing as hell experience of trying to find someone amazing in a sea of cocky idiots and turn it into this room full of people who were all in it together."

And that's how it felt that night. As the profiles got weirder and weirder, suddenly all of the late nights we spent on these apps, lying alone in bed, trying to maintain a conversation with an apathetic stranger who "loves coffee and working out," felt somehow validated. It wasn't just us. We weren't alone. We were all schlepping through this swamp of freaks together.

During the show, one creep's profile prompts Moore to ask the crowd, "Is this guy going to harvest my organs?" and the audience agrees, "Left!" and he's gone from the screen. When the next profile looks like it has potential, Moore, at the audience's request, swipes right. The screen lights up as two circles, Moore's face in one, the guy's in the other, swing into the center of the screen. Moore immediately messages him: "Hi. It's love. I've found you."

All of Moore's messages are hilarious and generally the conversations veer off into fun and weird places. Sometimes dark places, like when one asshole said if a woman "acts like a slut" he'd "treat her like a slut," and then went on to say rape wasn't real. Yes, Tinder is that bad.

sooo i decided to talk to a racist tinder dude who thinks women lie about rape! anyway he's single ladies so line up! pic.twitter.com/mkIN4Xq8qk

But, like Moore says, there is something oddly hopeful about the show. At one point in the night, Moore swiped right on someone she wanted to "save for later."

"It doesn't happen that often," Moore says, "but every now and then I see someone and I'm like, "Holy crap, you are legit hot and seem like a normal person. I'm saving this one." Despite the fact that most of their personalities turn out to be duds, Moore says, she does want to find someone great to date, "and you can tell the audience wants that for me too, which is really cool."

Since Moore is queer, both men's and women's profiles came up on the screen that night. When it came to one woman she said, "You're just a person," and swiped left without making any more comments. "I don't really make fun of women on the show," Moore says. "For starters, the entire world makes fun of women every single day, so I don't need to add to that, but also, most of the women on Tinder are just people." However, there are always exceptions. That night a profile came up with a woman holding two lighters and her bio listed only the death dates of her relatives. "That I will totally make fun of," Moore says, "because seriously, what is that woman's personal brand?! I still don't get it."

In my own experience, it was a lot easier meeting women on Tinder than men. "Oh it's all hard, no matter which gender you're talking to," Moore says, adding that she'd "love to find out where the hell the butch women are hiding on Tinder." They're probably hiding on Her.

Despite all of the awful and ridiculous experiences Moore has had on Tinder, including being hit on by a dog, it hasn't been all bad. "One Tinder date I went on took me ice skating at Rockefeller Center for our first date and then we got apple cider. It was seriously romantic and we actually ended up dating for a few months. I know most people's Tinder stories aren't like that, but at my core I'm a serious romantic and fortunately I've had some really lovely experiences mixed in with that garbage pile."

The next Tinder Live! show is November 20th at the Bell House with a panel including Sondre Lerche, Danny Tamberelli, Mike Maronna, Amy O'Leary, and Samhita Mukhopadhyay.