Dutch artist Tinkebell has been provoking people and ticking off animal activists for years. From her controversial work involving dead animals, to the time she broke her own cat's neck and turned it into a handbag rather than having it euthanized -- she's an easy artist to hate, while admiring her for the risks she takes.

One of Tinkebell's principal aims is to shed light on the way millions of animals are killed behind closed doors, while others are treated as fashion accessories. And though she insists that the animals she uses for her projects had all previously died of natural causes, stories online and various petitions have alleged that she harms the animals herself.

Detractors have been aggressive with their criticisms. She has received so much vehement hate mail over the years -- hundreds of thousands of letters and emails, she says -- that she collected a lot of it into a book, "Dearest Tinkebell," which publicly reveals the senders' identities, the towns where they grew up, and various other public information that can be found online. In certain cases, she reveals their Facebook photos and Amazon wish lists.

"The senders came from all walks of life," she wrote in the Guardian. "I know this because many emails automatically included a signature with a link to a personal or company website. A combination of a false sense of anonymity and the idea that everything digital is 'not authentic' makes sending hate mail easy." 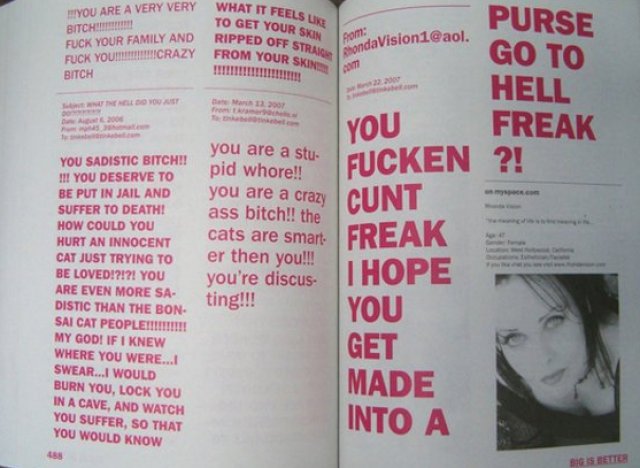 No stranger to controversy, Tinkebell is currently in New York City working on a large project involving a "My Little Pony"-style taxidermied horse for the PULSE NY art fair. She spoke to The Huffington Post about animal rights and people's visceral reactions to her work.

There is, as you say, a lot of inaccurate information about you online. Why do you think this is? Have animal rights activists simply gotten it wrong or are they out to get you?

It's a mix of things. It all started I think seven or eight years ago. The thing is that [the stories] have all been translated so many times, and it's just like when you're in a group and someone tells someone else a secret and this person tells it to someone else. The story changes. People add stuff.

Are the rumors good for you as an artist? They certainly give you more attention.

I try to put the rumors away. Because still, I did make a purse out of my own cat. And people are angry about that, and that's fine -- because I actually did that. But when it's not about my work or about me anymore, it's just a story, it's made up, and it has nothing to do with me. And it gets bigger and bigger, the stories [spread] all around the world.

How do these rumors begin? Didn't you once threaten to put a bunch of baby chicks in a wood-chipper for an art project?

I once gave a lecture and in this lecture I explained how chicks are being killed in factory farms. And somebody took that lecture and translated it like I was killing those chicks. Which wasn't true. I did do a project in which I tried -- in the Netherlands, per year, 31 million baby chicks are killed right after they are born. I did a project where I wanted to let people be able to save a chick. And I told people that if they wouldn't save one, I would kill one anyway, right there. But I was still taken into custody by the police, went to jail for one night, because I planned to do it. But those chicks were killed anyway. Not by me, just a company who does it all the time.

I guess there's something about doing it out in the open, publicly, that makes people so uncomfortable.

In a broad way, I try to make people discuss the norms. In how we live, how we eat, how we behave. Most people eat meat from factory farms, and they really don't want to know how they are killed. So I just show them: this is what you do. And most people don't like it.

Do you address these things in your book, "Dearest Tinkebell?"

There are six essays in the book where I talk about that. People don't know the truth about my [work], they don't get it. But it's not just hate mail. I often get good emails from people who turned vegetarian or things like that. A lot of people do get it, but not all of course. But it's good! I think. It starts a discussion.

What do you want people to get out of your art?

I want people to think. I'm not going to tell you to go to church or to live your life like any way. But I give lectures, I'm a guest teacher at universities, and I write and I make my art. That's what I do.

Tinkebell's work can be seen from May 3-6 at PULSE New York.