Males of the genus Antechinus, once called marsupial mice, mature quickly and mate repeatedly during a short breeding season, humping away until they're totally played out. Then they die... and males of all other species are jealous.

Antechinuses are native only to Australia, Tasmania and New Guinea. Male brown antechinae, from Australia's southeastern coast, die after their first breeding season (which lasts two weeks) as a result of stress, exhaustion, and starvation. They have a life span of just under a year, making it through one breeding season, during which time there's some serious thunder Down Under. Males can spend up to 14 hours mating, nonstop! I think if you experience an erection lasting more than four hours you're supposed to see a doctor. Clearly it's different for antechinoidia. 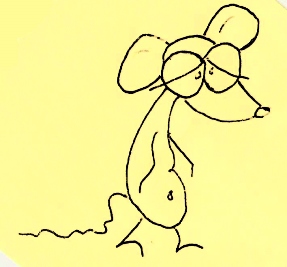 From what I've read about these randy rascals, it seems that come breeding time males strip their bodies of vital proteins and suppress their immune systems so as to free up additional metabolic energy. In this way an individual male trades away long-term survival for short-term breeding success. In short, he produces more and better sperm.

Females, who live through two and sometimes three breeding cycles, have litters of baby antechinodisiati with individuals sired by two, sometimes three different males. Increasing the likelihood of multiple paternities is the fact that females can store sperm for up to three days in specialized sperm-storage crypts in their ovaries.

Obviously a marsupial's lifestyle is not to be emulated, unless you're a Kardashian.

In a recent study, Diana Fisher, a researcher at the University of Queensland reports that the strategy called suicidal reproduction, or semelparity, is a simple equation for the short-lived males. In the October 7 Proceedings of the National Academy of Sciences, Fisher shows that males give themselves entirely to the breeding process in order to fertilize females with the highest quality sperm possible. Fisher and her team found that compared to other marsupials, antechinaphaloids have much larger testes relative to body size, and big marsupial mouse balls are better for storing marsupial mouse sperm. Their gargantuan gonads are so efficient at cranking out baby batter, they actually stop producing sperm before mating begins. According to Fisher, this is so that they can put all of their energy into non-stop mating sessions. Said Fisher:

They must rely on stored sperm throughout the mating season, and the clock is ticking, because the limited store of sperm is continually lost in their urine... They have a frenzied mating season lasting only a couple of weeks, and males usually die before young are born.

And if that isn't cool enough, she added:

This is a form of post-mating sexual selection in which males compete with their sperm inside the female reproductive tract, rather than fighting to gain access to females... It is associated with having large testes with lots of sperm-producing tissue, and often also long mating times and mate-guarding, and of course promiscuity.

Not making it past adolescence is a shame and all that, but we're talking about a life that extends over the course of a year and as it builds to a crescendo, consists of growing a pair of balloon-like boys that then get pressed into service for 14-hour sex-a-thons, back-to-back, for two weeks, and then you slip into a haze of post-coital exhaustion and die. Then the jukebox plays Freebird.