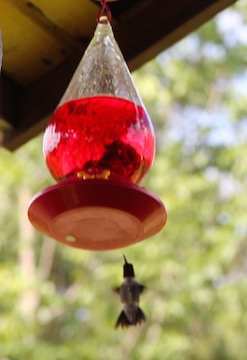 Every summer I write on the cabin porch, six feet away from a hummingbird feeder. We hung it up so we could see those amazing, tiny, beautiful creatures up close. But spending a summer in close physical proximity to hummingbirds has taught me something:

Their entire lives consist of drinking nectar and trying to beat the shit out of each other. When they chase each other ,they don't mind flying six-inches above my head, because they are so intent on their harassment of other hummingbirds that they don't even notice that I am a human and should be viewed as a possible threat. They know they are small and that doesn't stop them for even a millisecond.

If a hummingbird was the size of a sea gull, we would recognize their sinister nature and consider them a threat against all humanity. But they are tiny and delicate and so we write poetry about their rapid heartbeats and their little speedy wings and the iridescence of their feathers. In other words, forget pretty is as pretty does, hummingbirds can pretty much get away with being the biggest assholes of the bird community and no one minds because tiny. Because beautiful.

I could write here about not being a tiny, perfect, beautiful princess. I could write about primadonnas and stuck-up women who think pretty is a gift they bestow on mankind. I could write about how small Cinderella's feet were compared to mine. I think we all know ways we are the anti-hummingbird--the times we were not tiny enough,not beautiful enough to have as much value as people who were not deserving of the adoration they received. I'll let you finish this story on your own.