A town in upstate New York is trying to force a local Muslim religious community to dig up a small cemetery on its property and never bury anyone there again because it says it's illegal.

"What we would not want is an unauthorized cemetery," says Bob McCarthy, town supervisor of the Delaware County town of Sidney, population 5,993. "We're taking care of a bunch of cemeteries, and they just came in and buried the bodies, and didn't go through...there's no funding there, it's not a standard kind of deal, and it's going to become a liability to the town."

So what steps have the Muslims skipped? "I don't know what the exact law is," he says.

Which is the problem; because whether or not the town government likes it, there are no laws in Sidney -- or New York state, for that matter -- covering cemeteries on private land -- religious cemeteries included. Plus, the town approved the cemetery in 2005.

In any event, the cemetery, in the tiny hamlet of Sidney Center, was never a secret -- and couldn't have been: When the first body arrived in November, 2009, it had a 3-car escort from the Passaic, New Jersey Police Department, which necessarily told local authorities it was arriving.

And there's certainly nothing illegal about it as far as the State Troopers are concerned. "We looked into the cemetery and it was determined what they were doing is lawful," says Captain James Barnes of the New York State Police, Troop "C," based in Sidney.

This apparently isn't stopping the town board. Town attorney Joseph Ermeti wouldn't speak with us, but two other town officers indicated that in the absence of specific laws forbidding the cemetery, the town may try for a court order to force the Muslims to dig up the graves, based on a New York law against cemeteries on mortgaged land -- a technicality that covers the Muslim site, sitting in a hillside glade no larger than a Manhattan studio apartment. 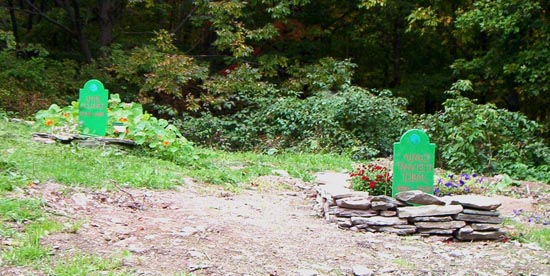 Shaykh Abdul Kerim al-Kibrisi, leader of the Sufi group -- called Osmanlı Nakş-ı'bendi Hakkani Dergahı -- says he just discovered the problem himself, and is correcting it -- his options being to either subdivide the property to exclude the cemetery, or to pay off the mortgage, which is under $200,000.

In any event, whether a lawyer could convince a court that a 650-square foot cemetery on mortgaged property so offends the dignity of the law that it merits digging up bodies is the sort of fine distinction only lawyer could love. Likewise, there's the question of whether taking such a course is wise, since the town's actions could attract all sorts of unwelcome attention -- and possible civil rights lawsuits.

"Islamophobia is something we're definitely aware of," says James Mulvany, Deputy Commissioner of the New York Division of Human Rights.

Some interested parties are certainly looking at the religious bias angle -- in part because the board took its first official steps in July, just as the so-called "Terror Mosque" controversy was making headlines.

"It's like Sherlock Holmes used to say," says Ibrahim Hooper, national communications director of the Council on American Islamic Relations (CAIR), which has attracted its own Islamophobes. "When everything that's untrue is disproved, what's left must be true, and this is obviously bias."

Feelings in Sidney about the cemetery are certainly strong. Asking a sampling of people in Sidney drew responses ranging from a deer-in-the-headlights stare followed by categorically denying knowing anything about it, to a strong stare and a curt, "mind your own business."

In fairness to both the town and Sidney Center -- population 1,391, area 44 square miles -- the Shaykh, in his flowing robes, long beard and turban, must cut quite a figure to deeply traditional, rural Americans.

And the fears that fasten on him and his followers aren't helped by the fact that in the past year or so, Muslims have been buying property near the center, spurring speculation that the ultimate plan is to create a town-within-a-town, governed by Sharia law.

"I understand [those fears], but that's not our intention," says the Shaykh, who says no more than a half-dozen Muslims have bought property nearby. "They just want to participate [in the center], get away from the city, and live a clean life."

And in fact that's exactly why the Shaykh and his 30-some followers moved to the 50-acre sheep farm in Sidney Center in 2002, his basic teachings being that since the world is what it is, people who want to live a spiritual life need to live apart from it -- not unlike Hasidic Jews or Amish people.

But that hope hasn't stopped what the community considers harassment. Hans Hass, a spokesman for the group and member of the local EMS team, says that while most relations with their neighbors are civil, some trucks do blare their horns and throw rocks at the little farmhouse on Wheat Hill Road.

Then, he says, there have been the "dozens" of visits by various police departments since 2002 -- including one in 2003, made by the FBI on a Muslim holy day -- the Eid-ul Fitr, which marks the end of Ramadan.

That visit, says Capt. Barnes, was triggered by a report that a man wanted for murder was seen on the property. Hass says it was because of reports of "people with turbans." Captain Barnes says his men have made "only about a half-dozen" official visits to the center, although he concedes there may have been more, unofficial visits from members of his Troop as well as Delaware County and Sidney police.

At the end of the day, the entire hoo-hah may be the result of third parties using the town as a cat's paw to attack the Shaykh and his followers. An email from one Salih Kalfaoglu and made available to me accuses the center of being a fraudulent, for-profit venture (an email to the address on the email requesting comment wasn't returned).

Another email, from McCarthy to a third party, discussed telephone calls from someone claiming Tea Party affiliation who "...wanted to know how he could help with 'the Muslims.'" In that email, McCarthy says "all outward signs...indicate this is a for profit venture and should not receive any of the benefits afforded to a religion."

None of this, says Hass, who was born in Maine, is what the Shaykh and his followers want. "We hope to put down our roots and live here as Americans."