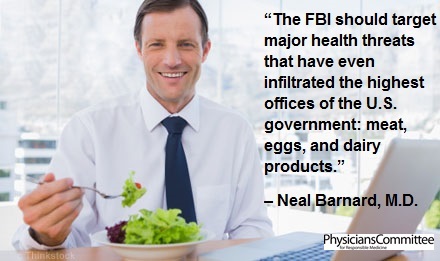 The FBI is combating a deadly enemy: bad health. So the agency is now requiring its agents pass an annual fitness test that includes sit-ups, push-ups, and running. But the program is missing some key intelligence that in my opinion will ensure the mission's success. Here's a clue: nutrition.

The FBI's battle to get healthy won't be won with just a couple of minutes of exercise once a year. Studies have shown that exercise alone is not helpful for weight loss and that exercise does not burn off a bad diet.

The agents must also target major health threats that have even infiltrated the highest offices of the U.S. government: meat, eggs, and dairy products loaded with saturated fat and cholesterol. These are the very foods that the put the safety of all Americans at risk for obesity, heart disease, diabetes, cancer, and Alzheimer's disease.

But a few simple changes in the FBI cafeteria could go a long way toward improving the agents' health. Clinical studies my colleagues and I conducted with the insurance company GEICO found that companies that offer employees a low-fat plant-based diet in the office can help workers lose weight and improve diabetes. The findings were published in the European Journal of Clinical Nutrition, American Journal of Health Promotion, Annals of Nutrition and Metabolism, and Public Health Nutrition.

Health problems stemming from overweight aren't the only dangers the FBI is facing. After 9/11, "some agents put on weight, while some suffered from anxiety and depression," according to the New York Times article about the fitness test.

A plant-based diet helps mental health, too. Earlier this year, we published GEICO findings showing that a dietary intervention in the workplace alleviates symptoms of anxiety, depression, and fatigue.

It's clear that by protecting itself with fruits and veggies, the FBI could better protect us. It wouldn't be the first time that nutrition has become a matter of national security for the government. Congress passed the National School Lunch Act as "a measure of national security, to safeguard the health and well-being of the nation's children."

Of course, my plan doesn't require an act of Congress. The Physicians Committee's Food for Life Employee Wellness Program includes elements from the GEICO study: simple nutrition classes in a supportive group environment and plant-based options in the cafeteria.

Along with GEICO, several other companies have already participated in the program, including the Whirlpool Corporation, PEPCO, Sony Pictures, the U.S. Departments of Justice and Transportation, NASA, and the U.S. Postal Service.

To better focus "on threats that challenge the foundations of American society," the FBI first needs to combat disease-inducing meat and dairy products within its own ranks and protect its agents with a healthy plant-based diet.