Hope must die last in the coalfields, as our prayers go out to the families of the missing four coal miners and the 25 killed in the recent Montcoal mining disaster in West Virginia.

But as heroic rescue teams attempt to reach the missing miners, another potential disaster instigated by reckless Massey Energy regulatory violations and oversight looms above the very heads of these affected coal mining communities -- and the pool of journalists and observers:

Blasting within a football field of the nearby class "C" Brushy Fork impoundment, one of the largest and potentially weakest coal slurry impoundments in the nation, Massey Energy is engaging in a violation-ridden act of aggression against besieged coalfield residents.

"Today Americans are witnessing the tragedy of Appalachia," says Bo Webb, a resident in Peachtree, West Virginia. "Coal barons such as Don Blankenship daily place their employees as well as entire communities at great risk in order to satisfy the profit of Fat Cat Wall street Investors."

This week's mining disaster is only the tip of the iceberg of Massey's dangerous mining operations -- from underground to above-ground strip-mining and mountaintop removal blasting -- that threaten the lives of coalfield residents and mining families.

One of the most under-reported aspects of underground mining violations is the continual scandal of black lung disease. Three coal miners needlessly die daily from black lung disease -- the inhalation of coal dust -- due to poor enforcement of regulations and mining companies that flaunt workplace safety laws.

Black lung disease was first detected in 1831 -- and yet, our nation continues to tolerate this daily tragedy that strikes down coal miners every day.

That same sense of betrayal of coalfield communities hovers above their heads at the Brushy Fork coal slurry impoundment. Despite pleas and protests by local residents, as part of the reckless mountaintop removal plans for Coal River Mountain, Massey Energy is now operating a strip mine near the Bee Tree branch of the mountain, blasting outrageously close to a multi-billion gallon coal slurry impoundment that is held back by a weakened earthen dam.

"Massey's aggressive mining mission doesn't even consider the fact that they have completely surrounded an elementary school and placing young children in harms way," adds Webb, who has campaigned with area residents for a new school for years. Marsh Fork Elementary School sits within a football field of toxic coal silos, as well.

According to Massey's own evacuation reports, a break in the coal slurry impoundment would result in certain injury or death for the nearly 1,000 residents downslope in the valley. Some area residents would have less than 15 minutes to escape a 72-foot tidal wave of coal slurry.

Here are the graphs of the proposed evacuation scenarios: 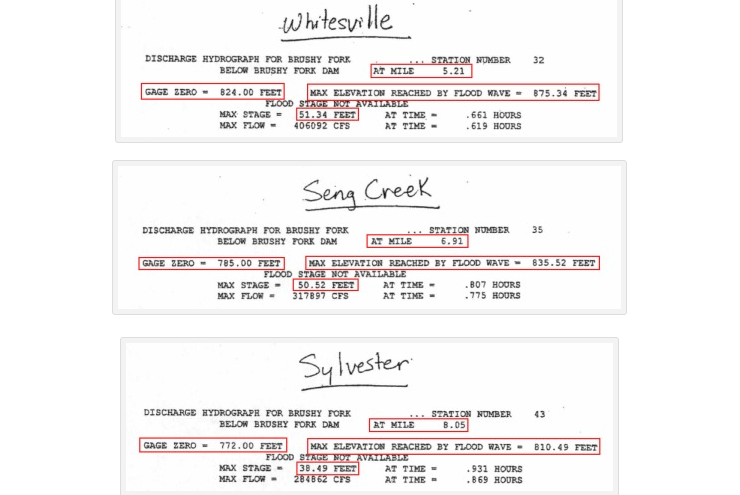 Massey's Edwight mountaintop removal mine is another potential disaster waiting to happen.

Coalfield residents in other counties have also cited Massey violations that have led to the contamination of their watersheds.

Before another disaster strikes the Coal River Valley -- and in the coalfields across 24 states in the country -- it's time to bring the era of regulated manslaughter and human rights violations to an end.