Let the fun begin! December is a month full of parties -- and for many people, booze. Great. But if you are going out, it's important to be smart about your drinking. There's nothing merry about a hangover, after all, especially if you did something you regret... whether or not you remember it the next day. So how can we celebrate the season with alcohol, if that's our choice, and still stay safe?

"There is nothing wrong with enjoying yourself and cutting loose a bit during the holidays," points out Kenneth Anderson. He's the founder and executive director of the HAMS harm reduction for alcohol network, the author of How to Change Your Drinking and a regular Substance.com contributor -- in other words, the perfect person to ask about safer drinking. 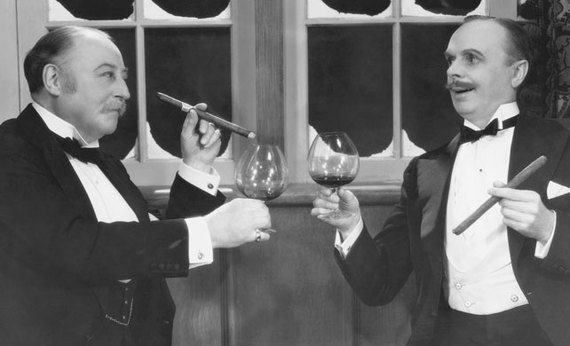 While Anderson has no desire to dampen festive spirits, he's also very aware of how dangerous drinking gone wrong can be. "Always plan for safety above all," he says. "Death is always worse than a hangover." Well, that's for sure. So I asked him, along with a few moderate or not-so-moderate young drinkers, for some safer drinking suggestions.

Figure out your transportation plans before you leave the house, so you won't have any issues returning home, even if you're inebriated. And if possible, always travel with friends, so you can look out for each other.

A spontaneous night of drinking with friends is fine -- they're sometimes the best kind. But if you're going out frequently during the holidays, you'll do better to arrange your schedule so you avoid alcohol-based socializing multiple days in a row. It may sound nerdy, but your body will thank you for it.

Keep listening to your body, too; make sure you get plenty of sleep in advance, so that you head out feeling well-rested, rather than fatigued. And some prior awareness of how much alcohol your body can handle is also invaluable.

"The major thing that's helped me feel better is being realistic about how much I can drink now," says 24-year-old Allison from New York City. "I can't down eight beers a night like I did in college and feel fine the next morning." These days, she knows and accepts that four drinks are her absolute limit -- and she sticks to that. Once you've found out (hopefully not the hard way) how many drinks your body can withstand, it's well worth making a similar rule.

If you think you may have trouble sticking to your self-defined limits, Anderson recommends writing out a plan for each situation you might encounter to keep your consumption at your chosen level. If a friend insists on drinking a shot with you, for example, you could sip yours slowly over half an hour even if he pounds his down. If Mom insists that everyone have wine with dinner, you can make one glass last the whole meal by drinking water too. And if you think you'll need a reminder of your plan in the moment, write it down and carry the paper in your pocket. Luckily, the kind of situations you'll encounter aren't too hard to predict, which makes preparation a whole lot easier.

Speaking of preparation, what better form could it take than hearty eating? Drinking on an empty stomach is a bad move, because the alcohol will hit your bloodstream -- and get you drunker -- faster. Instead, help yourself to some fatty food first -- fattier foods slow alcohol absorption most effectively, Anderson says. Make sure you drink lots of water before and during your night out too, because alcohol will dehydrate you, and you'll drink more booze if you're thirsty.

"I've gotten dehydrated from drinking to the point where I've passed out days later because I never replenished those electrolytes," says 27-year-old Brooke, who also lives in New York. Staying well hydrated will ensure that you stay safer and feel better -- both while you're out and while you're recovering the next day.

In theory, all alcohol is the same -- whatever the drink that contains it -- and if everyone drank it at the same rate, it would have the same effect. But as most of us know, it doesn't always work that way in practice.

"People tend to drink different kinds of alcohol at very different rates," Anderson says. "This is why people barhopping and switching from beer to whiskey to gin tend to wind up with puking blackouts."

You may well find it easier (and safer) to stick with beer or wine instead of doing shots with buddies. And if you usually drink vodka too fast but find you can maintain a steady pace with bourbon, take advantage of that habit. It all comes back to knowing what works for you.

"Generally, the lower the alcohol content and the stronger the flavor, the slower people will drink," says Anderson. "A careful plan of a pre-dinner cocktail, a wine with dinner, and two standard after-dinner drinks will be fine. Chugging a bottle of wine, a six-pack of beer and a pint of gin will leave you with the blind staggers."

That said, if you choose a mixed drink, Anderson warns that carbonated drinks are absorbed more quickly by the body. What's more, drinks made with diet soda result in higher blood alcohol content levels than those made with regular soda. So if you're ordering a beverage with soda in it, be sure to take it slow.

Finally, choosing your drink wisely doesn't just apply to which type of alcohol you pick: Never let a stranger pour your drink.

There's just no need to chug your beer, no matter what the rest of your buddies are up to.

"Sometimes when I start a drink, I give myself a minimum amount of time that needs to go by before I can finish it," says 30-year-old Robert from Los Angeles. "I feel better that way, but I also figure I'll enjoy the beverage more if I go slow than if I down it all at once."

As well as the enjoyment factor, this is also a pretty good strategy to keep yourself from blacking out -- so much so that Anderson also recommends using a watch to measure the pace of your consumption if necessary. Be sure to stick to a pace that works for you, and don't let anyone pressure you to speed up. Alternating between booze and non-alcoholic drinks throughout the night can be a good way to handle this.

Skip the aspirin -- and just about every other drug

You may have heard rumors that taking aspirin before a night of heavy drinking can prevent a hangover. But this is actually a terrible idea. "If you take aspirin before drinking, you will get much drunker on the same amount of alcohol," Andersen explains. This apparently tends to affect men more than women, but is ultimately dangerous for both sexes.

However, it is generally safe to take an aspirin at the end of the night, as long as you have no tendency to stomach ulcers. (Take it with a big glass of water to help prevent dehydration the next day.)

Mixing alcohol with other drugs can be just asking for trouble. Drug/alcohol combos that are particularly dangerous, as rates of ER visits and overdose can attest, include opioids, benzos and cocaine -- but that's by no means an exhaustive list. Even excessive amounts of something as innocuous-seeming as caffeine can be risky, by encouraging you to keep drinking for much longer than you normally would.

If you're in any doubt about whether the drug you're taking is safe with alcohol, by far the safest thing to do is avoid booze entirely, at least until you can check with a medical practitioner.

Deal with your hangover safely

If you ignore all this wise advice and end up with a horrible hangover after all, the best thing to do is rehydrate and eat some food. Chocolate milk, tomatoes, bananas, and herbal teas are all good options.

But don't just chug vast quantities of water, as that can lead to water intoxication, warns Anderson. In addition, mild exercise like yoga or walking may help you feel better.

Drinking should always be a choice -- not something you feel pressured into, no matter what the occasion. If your family or friends give you a hard time about abstaining from alcohol on New Year's Eve, Anderson suggests telling them you're on antibiotics. Or you can quietly drink near-beer, grape juice, or soda and they will likely not even notice a difference.

Whatever your choice, the holidays can be fun with or without booze. "If you don't want to drink at all, that is your right too," Anderson says. "You will find nowadays that more and more people respect that."

Chrisanne Grise is a journalist and magazine editor living in New York City. She blogs at chrisanne-grise.com.