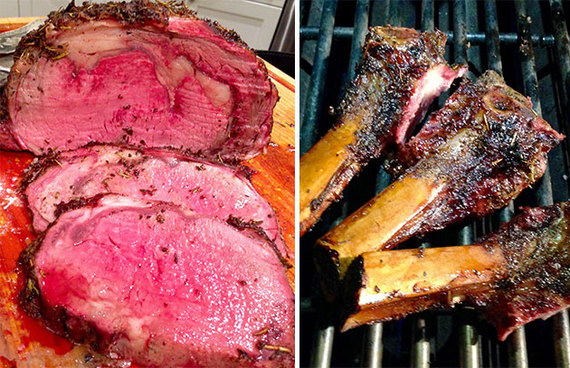 In 2013 I wrote, "Spit-roasting is my hands-down favorite method for cooking prime rib. Thanks to the slow, gentle rotation, the meat cooks evenly and bastes in its own melting fat."

Today, I'd like to reverse myself--reverse being the key word. This year I'm using the "reverse sear" method.

Reverse-searing has flooded the blogosphere recently. So you might be surprised to learn that it's been around since 2001 when one Christopher Finney, member of the competition cooking team Iron Pig BBQ, claims to have invented reverse searing.

In a nutshell, you smoke or indirect grill thick cuts of beef and other meats to within a few degrees of your ultimate desired internal temperature, rest them, then sear at high heat. The result is meat that is uniformly pink across its diameter--cooked to temperature--with a beautifully crusted exterior. (Traditionally, meat is seared, then roasted, a technique that yields a "bulls-eye" effect, where a blood-red center is surrounded by concentric rings of pink, then grey, then brown meat.) This method works for all sizes of prime rib, from a modest 2-bone piece that will feed four, to a massive 7-bone piece that will feed up to 20.

Here are some simple tips for prime rib success:

Get more prime rib tips and instructions at BarbecueBible.com.