An exciting phase in the creation of mobile games for kids arrives when the game is finally finished to a point where it's ready to be tested on those it was created for - kids! Two weeks ago we reached that point with our current educational game Eli Flying Explorer. After almost 4 months of developing the game from concepts to coding, it was time to see how kids played it, and most importantly, if they liked it! 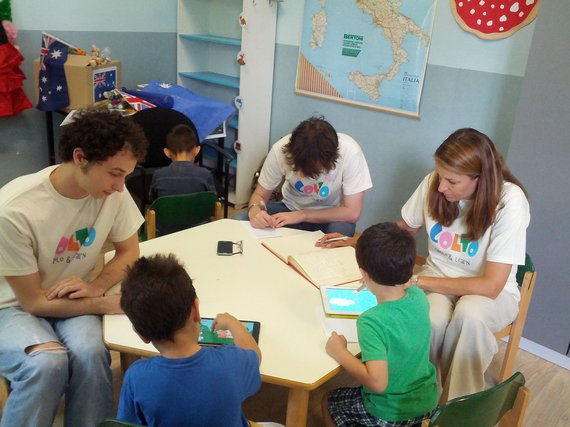 Over a 2 week period, we took 4 iPads loaded with the game to different schools in and around Milan to watch 100 children playing. What we learnt proved to be vital to the game's success. In the first testing session we discovered a number of kids were getting stuck in the animations and were asking us how to proceed. It was a problem we could never have predicted as everyone who had played the game until that point knew how it played.

Each type of game is played differently by kids and we observed that with this game there were 3 distinct types of players; those that continually tapped or swiped the screen in different places, those that dragged Eli (the game's lead character) across the screen without lifting their finger and those that intuitively knew how to guide Eli and lift their finger to start the animations. We had built the game for players who knew intuitively how to play so we needed to make changes and additions to cater for those who didn't.

We also benchmarked the game in some of the testing sessions against a leading kids App that has been downloaded more than a million times on the App Store. During the first session, 20% of the kids told us they preferred our game. After modifications and additions, just over 50% of the players in the final testing session told us they preferred our game... testament to the importance of the player experience.

Following are tips on how to get the most out of live user testing with kids that we've learnt: