Are you a divorced mom? Is your relationship with your ex more scary than merry? If so, the holidays can make for some extra rough sledding. And there's nothing quite like co-parenting with a grinchy ex to put you in a bah humbug state of mind.

Behold! I have some survival tips for you!

Don't expect a Christmas miracle. When it comes generosity and goodwill, the holiday season offers a veritable horn of plenty. But don't let the hype cause you to have unrealistic expectations. Although you don't have to deal with your ex's shortcomings and personality flaws on a daily basis anymore, he hasn't been magically relieved of them. So take a moment to remember what they were. Was his heart two sizes too small? Did he over-promise and under-deliver? Did he bark out orders or otherwise act like a mean Santa running an elf sweat shop? Did he take credit for other people's contributions or accomplishments? Was he a cheapskate? The point of going over his naughty list isn't to harsh your Christmas high: It's to prevent your Christmas plans from getting dashed by behavior that is as old as Father Christmas himself. Like taking a refresher course in CPR, brushing up on something you technically already learned enables you to avoid disasters that might otherwise occur if your knowledge and skills aren't so fresh.

Don't crash the Christmas sleigh. Now that you've reminded yourself of what you might encounter from your ex, let that knowledge serve as a weather forecast of sorts, helping you to design the best route for delivering a merry Christmas to you and your kids. If he's quick to agree to split the cost of big-ticket presents for the kids but slow to fork over his reimbursement, think twice before going in halfsies with him. And if you decide to, anyway, make sure you get his contribution up-front rather than putting the whole thing on your debit card on his assurance that the check is in the mail. Remember, if the obligation is not backed up by your divorce degree, you're taking him at his word. If it is more likely for Santa to leave a pile of presents under your tree than it is for your ex to pay you back, don't go out on a limb for someone who leaves you on the skinny branches.

Don't snow your kids. If your ex has a history of making big promises to your kids and then failing to deliver on them, your job is to make sure you neither talk up nor down his grand plans. Say, for example, he tells them he's going to give them a white Christmas this year because he's taking them on a ski trip to Aspen. Don't heighten their expectations by giving them all ski-trip-related early Christmas gifts. But also don't tell them that the only snow they're likely to get is from the snow job their dad is giving them about the trip. You know there's a good chance he will flake out, so keep your Christmas plans and gifts independent of his. That won't eliminate your kids' disappointment if the trip doesn't come through, but it will keep you from compounding it.

Stay jolly. If you find yourself frustrated by your ex's shenanigans, don't let your inner angry elf get the best of you. I know it's hard to resist firing off a text or five telling him exactly what you think of him. But try to keep things in perspective. There's nothing new about how he's acting. And if your pointing out his jerky behavior were all it took to get him to correct course, he would have knocked it off back when you were married. You may think giving your ex a piece of your mind will at least make your spirits brighter, but I promise it won't. It just makes you frustrated that he managed to get under your skin yet again. A better use of your time and energy is to wait until you're having a Christmas cocktail with your closest friends, then use the stories of his antics to spread some Christmas cheer by having a laugh with your besties. 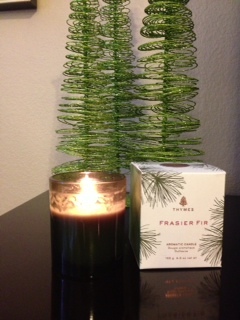 Don't permanently trade in your gay apparel for a dunce cap. Some of us need layered learning. Not only do we fail to learn things the first time around, we often have to relearn lessons we thought we mastered a long time ago. If you end up falling for something or losing your cool, you don't have to sit in the corner for the rest of the holidays. See it as chance to get it right the next time. Just like there's nothing like a fender bender to make you a more careful driver, there's nothing like your ex getting your goat to strengthen your resolve to not let it happen again. To reassemble your Christmas cheer I recommend the following ritual: 1. Get a Thymes Frasier Fir candle. 2. Light it. 3. Sit directly over it (but be careful not to catch your hair one fire). 4. Take deep breaths. Continue doing this until joy to the world has been restored. Have a happy and healthy holiday!

More:
co-parentingrelationship adviceParenting divorceHolidays
Newsletter Sign Up
A weekly guide to improving all of the relationships in your life
Subscribe to HuffPost’s relationships email
Successfully Subscribed!
Realness delivered to your inbox